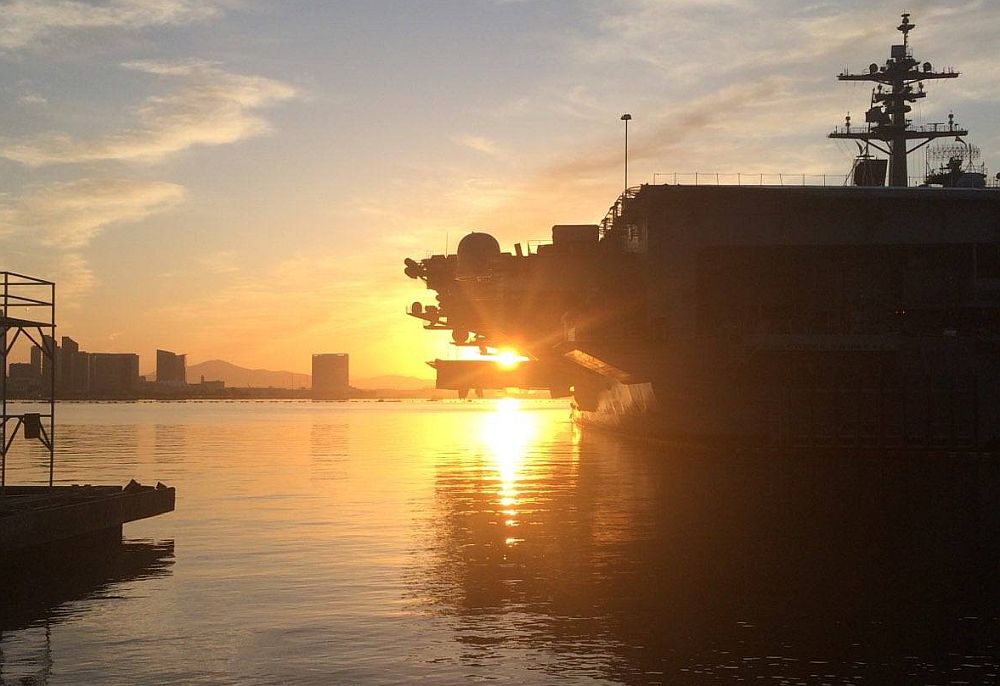 Yvette Currie (93) is a licensed marriage and family therapist with a private practice in San Diego. She has also spent time as a deployed resiliency counselor (DRC) with the United States Navy.

According to a Navy brochure, “DRCs offer confidential, short-term, non-medical counseling at no cost for all active-duty service members while they are deployed aboard the ship or while the ship is in homeport.”

Coming aboard a Navy ship as a deployed resiliency counselor (DRC) during a powerful transitional time for a culture focused on eradicating sexual assault was humbling. My effort to embed into the ship’s culture yet remain alert as an ambassador for the eradication of destructive behaviors was a careful dance. At times, it was like being awash in a sea of tasks, faces, acronyms, lines, and rituals. Other times it was like being a splinter on a smooth wooden floor.

The Navy’s DRC project was initiated post “TailHook” and pre “MeToo.” While our military has effectuated our freedom, it has also contributed to harm. I wondered about being funded by this system. Is it, in some sense, being complicit?

This was a decision between standing outside a military system, innate with flaws, in some silent unheard protest, versus choosing to enter inside it and attempt to broker change. I opted to go inside.

Since intruders are not always welcomed with open arms, I wondered: would the ship’s culture continue to click along on all cylinders, unaffected by the presence of a civilian who was not entrenched in the military way? Would things radically change? Would an outsider’s perspective resonate?

At times it seemed like a tightrope walk, during which a misstep would potentially demonstrate my civilian ineptitude or, worse, DRC hypocrisy. What if I lost my temper, fell down a ladder well, missed a “man overboard” drill? “If you, the paragon of resiliency cannot hold it together on a deployment, how can I, Seaman Timmy, be expected to?” someone might ask.

The expectation we as DRCs would be “high-profile change makers” with a congressional mandate added to the fishbowl effect and potential for toppling. The expectation wasn’t just about my personal performance; it could set the tone for the cohort to potentially follow my lead. I was cutting a new path for up-and-coming therapists.

For me, there was also the spiritual component. What would my Christian values look like practically implemented aboard this mini city? When you wrestle to articulate your Christian values within your place of employment, what logic emerges for you?

If all went well, military culture, paradigms, safety, and reputation could shift for the better. Even options for clinicians could expand.

To back up, DRCs are licensed providers who provide short term, non-medical counseling and are trained in all matters of sexual assault prevention, as well as general clinical knowledge. DRCs are also a supplementary resource for the ship psychologist and are the subject matter experts for the teaching of all things related to resiliency.

There are strict ethical and legal guidelines to which licensed clinical providers adhere. There are treatment modalities and parameters, sanctioned by licensing laws and the funding body. When an individual is having a spiritual crisis, a Christian clinician must uphold and protect legal and ethical standards without crossing church and state barriers.

When it came to the sensitive issues we were tackling, there were plenty of perspectives to observe aboard the massive nuclear-powered aircraft carrier, temporarily home to more than 6,500 sailors. Some sailors appeared to want to keep things status quo, citing “old Navy” ways and a dislike for the new “sensitive Navy” that is now “no longer fun.”

Others ran towards transition with open arms, eager to implement changes to long-held rituals and behavior in the name of progress. Leaders requesting assistance for their sailors were enthusiastic to send them to the DRC to learn resiliency skills, and many expressed a desire to speak openly about the tough issues they had faced during their careers. One career sailor, of nearly 20 years, indicated never feeling this comfortable to express concerns regarding professionalism in the workplace or discomfort with the sexual climate. I think this encapsulates the very purpose of a DRC.

Case in point: suicidal ideation, time and again, appears to be a crisis of purpose of spiritual proportions. When an individual takes his or her own life but appears to “have it all” (money, spouse, house, job, car, kids, looks, athletic ability), it “makes no sense.” Clearly something else is at play. The military also requested assistance on domestic violence, conflict resolution, and sexual assault culture, which all happen to  be areas out of alignment with God’s intent for our maximal thriving. I believe this request also echoes the question of how to be within the system, but not of it (echoing Jesus’ admonition to be “in the world, but not of it”).

“I saw this as a profound opportunity to implement the calling Jesus initiates in us all.”

DRCs can also be called upon to assist with focus groups and training, as we interact with hundreds or even thousands of sailors across the spectrum of ranks and job specialties, both in individual sessions as well as groups. We interact with sailors on the mess decks, on the bridge, and in the wardrooms. The range of feedback can be quite robust, unfiltered and raw. DRCs can be a valuable tool to take the “cultural temperature” of sailor satisfaction, fear of reporting, and the overall ship’s climate, as we are trained as group facilitators and capable of conflict resolution implementation. DRC involvement in this process can evoke discussion and create a forum for authentic feedback.

I saw some sailors who were in treatment, during deployment, for previous domestic violence incidents. They’d come in and take their emotional armor off, reveal themselves, transparent, vulnerable, and seen, and would frequently like it!

While we weren’t reading the Bible together, floating out in the Persian Gulf talking about emotional regulation, human dignity, boundaries, strength with compassion, and respect, we were inadvertently covering biblical principles. Sadly, many in these treatment groups were raised in environments that did not teach these fundamentals. Many of these sailors seemed to have been caught up in a tight unforgiving societal trap on perpetual loop.

However, aboard this ship, it was as if we found ways to recapture their original, intended design. Briefly devoid of external influences and judgments, the curtain pulled back and some of what we discussed resonated. Some sailors were so excited, they wanted to see this process translate to the entire ship.

I wrestled with questions: is it necessary to specifically mention Jesus? After all, he is what the core of change from within is all about. From him springs pervasive hope — to desire all that is enlivened and vital and to engender this hope in others. Not giving him credit could seem sacrilegious. However, giving him credit could, again, cross the bounds between church and state and could remove the option of such an opportunity altogether. Is it possible to live as a Christian “little Christ” without overtly stating this? It is a classic wrestling match between “giving to Caesar what is Caesar’s and to God what is God’s.”

Perhaps living and working as a little Christ in a secular world, helping the military with aches of the soul and their behavioral manifestations is more about the role modeling, the doing of the saying, rather than the announcing “this is JESUS, ya’ll.” But how reaffirming, when teaching and attempting to role model his principles, the ripple of resonance and excitement amongst the crew, who “got it.” Jesus is alive and well. His teachings truly are for living our best lives and being our best selves. When lived in his intended manner, people reclaim themselves and enjoyment.

Truly inspiring to observe were those who were given eyes to see, ears to hear, and hearts to understand for the first time.

Tuned in afresh and anew, some began to see their shipmates as sisters and daughters and mothers, as those worthy of protection, not objectification. Some became conflicted when hearing “cleaning station” music that denigrated the value of females.

As far as I’m concerned, change is afoot. Even when it’s microscopic, it’s important. Conversation, contemplation, even “looking both ways” before behaving on previously unexamined behavior, disrupted “autopilot.” We know a ship’s course altered a single degree will end up thousands of miles off course if left on this new trajectory. How so we, too, when microscopically altered, travel an entirely new life course.

Please pray for our service members.

Yvette Currie can be contacted through her blog site www.counselingsandiego.org. She is currently off the ship and operates her private practice on Bankers Hill, while spending a fair amount of time down this hill, at the Rock Liberty Station Point Loma campus.

Related story: Read about life after service as veterans work towards their degree.