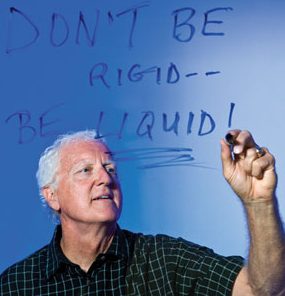 Winderl, PLNU professor of writing, didn’t set out to be a go-to Marian poet, with his work featured beside John Donne and Thomas Merton in the world’s largest collection of works about Mary, the mother of Jesus – housed at the University of Dayton’s International Marian Research Center and Library. He just thought his grad school poem about a woman watching her laundry sloshing and swirling had parallels to the womb experience. Then he titled the poem “an immaculate conception.”

“I didn’t sit down to write a poem about Mary,” said Winderl. “I wrote it accidently.”

Since his University of Chicago professor, well-known writer and educator Richard Stern, liked the poem, Winderl submitted it to The International Poetry Review. Not only was it accepted, it was also reprinted in a variety of other publications.

Marian poetry is generally directed toward the saint who is so sacred in the Catholic faith. But in Winderl’s poems, Mary is the speaker, not the subject.

Apart from the fact that he is neither a woman nor a Catholic, Winderl’s unique life perspective adds a matchless voice as well as depth and dynamism to the genre. His Marian poetry “is partly the result of being christened in the Polish National Trinity Catholic Church and baptized in the Church of the Nazarene, under the auspices of his grandmothers who alternatively shuttled him one Sunday to mass and the next to Sunday morning worship,” according to his bio in La Via de la Croce (The Way of the Cross), his most recent book of poetry.

Winderl’s writing career began in 5th grade, when a friend shared a few of Winderl’s science and historical fiction stories with their class. Winderl’s embarrassment faded when the whole class asked to read more. A few girls in the class copied the stories by hand and circulated them throughout the 5th and 6th grade classes.

“My popularity peaked when our 5th grade teacher allowed me to read one story aloud to the class,” said Winderl. “[But] the glory was short-lived.”

His family’s multiple moves landed Winderl in six elementary schools and three different junior high schools. He continued to write sporadically, but dropped out of a high school advanced English class after he wrote a “thinly disguised” autobiographical short story about a junior varsity basketball player that was not well-received by his peers.

Despite the setback, Winderl remained true to his passion for writing. While attending Trevecca Nazarene University on a basketball scholarship, he majored in English and contributed to the university newspaper. His senior year, he became editor of the paper and began experimenting with many different genres of writing.

He went on to receive an M.A. in American literature from the University of Chicago and later a Ph.D. in creative writing from New York University. In his studies, he “wrote everything from a novel to a grocery list,” but poetry was his strong suit.

Now, he says writing poetry merely “pays the postage” (which he also candidly tells his students in all his classes), but he still gives “the first fruits of [his] morning to writing.” In a dedicated writing spot in his home, he opens his day with a “hybrid devotion” of selected Scripture, reciting of the rosary, and of course, writing.

Winderl’s poetry has been published extensively, both for Marian organizations like the one housed at the University of Dayton and in many literary publications. Selections of Winderl’s Marian poetry were chosen as part of First Things, a respected anthology of poems, and again in an anthology of selected poems from First Things entitled Grace Notes.

In addition to his individual poems, Winderl has published several books of poetry – Mary Speaks of Her Son, which opens with “an immaculate conception,” and was nominated for the 2007 Book of the Year Award by the Conference on Christianity and Literature, and La Via de la Croce, a collection of sonnets telling the story of Christ’s Passion from Mary’s perspective, which was nominated for the same award the next year. Both collections were awarded the San Diego Book Award for books of poetry.

Winderl’s extensive experience and inimitable style have been inspiring PLNU students since 2002. He teaches creative writing such as non-fiction and poetry.

In addition to teaching, he and his wife, Dr. Ronda Winderl, professor of communication and theatre, direct PLNU’s London Semester, which immerses students in British culture during each fall semester. They teach, live, and travel with students of all majors. Among many highlights of the trip is Canterbury Day, where the group travels to the city of Canterbury by train, enjoys tea, and tells stories, reminiscent of Geoffrey Chaucer’s Canterbury Tales.

The Winderls have also traveled extensively with students on Semester at Sea, a study abroad experience where students learn while circumnavigating the globe, as well as organized several theatre/ literature study trips primarily in Great Britain.

For his students, Winderl’s dedication to write consistently and well serves as an inspiration, but also as a challenge – that students considering writing as any sort of vocation must be devoted and disciplined. Even when it may only “pay the postage,” writing is a very dedicated life work.

Love and dedication for writing are intrinsic for Winderl: “Bottom line: I write because I cannot not write, which I’ve been doing more or less for a very long time.”