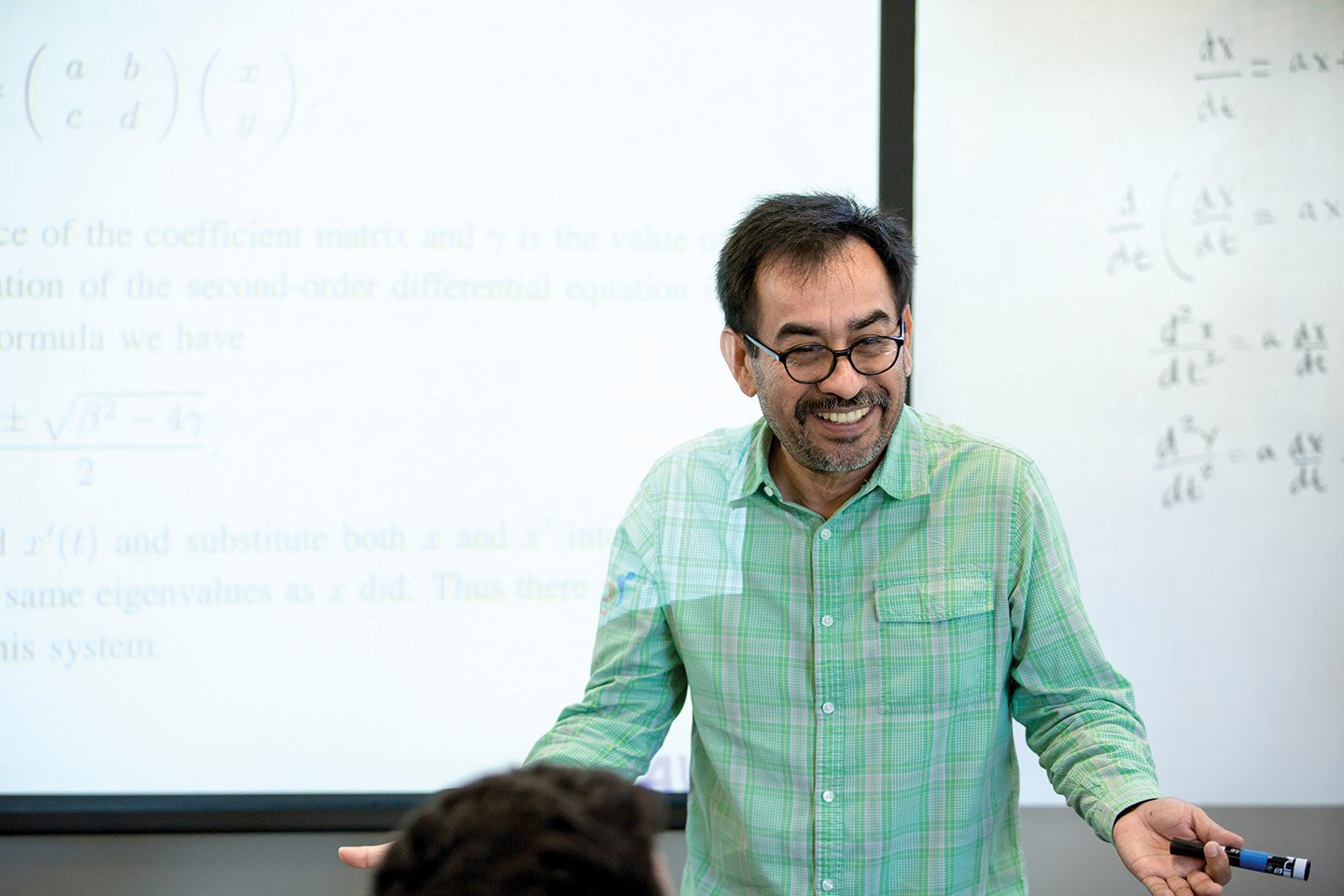 Origami geometry, military communication systems, and research on contractions of nonsingular curves all have one thing in common: Jesús Jiménez, Ph.D.

Jiménez is a tenured, full-time professor who has been teaching at PLNU for over 30 years. Throughout his time at PLNU, his work in research and as a teacher has ebbed and flowed inside and outside the classroom. Despite PLNU’s mathematics department not being a research-based program, Jiménez has encouraged the curious side of each of his students to question what is the real purpose of math.

This is something that has driven Jiménez since he also was a student, fascinated by the powers of mathematics.

“Everybody, when we are young, we think that math is just calculating things,” said Jiménez. “But, as it turned out when I was talking to a professor, math is more about thinking, bringing things together, being logical, and not so much the computation.”

Jiménez discovered these characteristics of math as an undergrad student at the National Autonomous University of Mexico, located in Mexico City. However, he was born in the state of Chiapas and was one of few people who pursued a career in mathematics from his hometown.

“[Chiapas] is one of the poorest states in terms of the attention the government gives to it,” said Jiménez. “I would say that before me, there were probably two or three people that studied mathematics from that state. It’s not something a person in Mexico will do because there is no good employment for mathematicians in Mexico.”

However, once at the National Autonomous University of Mexico, he had a professor who helped him realize this was the career he was meant to pursue.

“He was instrumental in convincing me to go and do math and also in finding financial support because I didn’t have any financial support. I was the child of parents who divorced, so I grew up with my grandparents,” he said. “By the time I was in high school, my grandfather had died, so it wasn’t really easy for me to get any support. I felt I had to succeed because they were putting a lot of their reputation on me when they went and found this financial support for me.”

In addition to financial burdens, Jiménez said the culture of Mexico City was new and an adjustment as a first-generation college student.

“It was difficult because when I went to Mexico City, not many of the professors looked like me,” he explained. “You can see I’m brown. Most of the professors were blonde and had blue eyes. Even though I was in Mexico, I still felt a little bit like, ‘What is this?’ A few years later when I got a scholarship, that was even clearer. I was probably one of four people in the math institute with this color.”

“Instead of dreaming of the big universities, I felt that maybe this was my calling. I’ve been here for 30 years so it seems it was right.”

However, with the support of counselors and professors along the way, Jiménez completed both his undergraduate and master’s degree in Mexico City. He went on to complete his Ph.D. at the University of Utah.

He worked at UC Riverside for two years and then, in his words, God provided the opportunity to work at PLNU.

“Instead of dreaming of the big universities, I felt that maybe this was my calling. I’ve been here for 30 years so it seems it was right,” he said.

On top of his work as a professor, Jiménez completed research for Space and Naval Warfare (SPAWAR) during a sabbatical in 1997.

“The chair of the math department’s son had been working at SPAWAR. He put me in touch with one of the scientists there. He said they’re trying to use some sort of abstract mathematics to communicate,” said Jiménez. “My area is algebraic geometry. We created a new family of codes.”

These codes contributed to new digital communication technologies that the military could use.

Additionally, he researched contractions of nonsingular curves with algebraic geometry. This research explores what shapes are created by certain equations on the Cartesian axis and what smaller dimensional objects can fit within the shapes generated. They discovered one equation that behaved differently from the other ones.

“Somehow you can do nothing with it. You can’t collapse it to a point. I was able to prove that in order to bring it down, some algebraic condition had to be satisfied,” he explained.

His experiences with research have extended out of the lab and into the classrooms. PLNU students followed in his footsteps, completing honors projects with similar research.

“After I did this research for the government, I realized this is something we can actually teach our undergrads, and some of them can do research on this.”

“After I did this research for the government, I realized this is something we can actually teach our undergrads, and some of them can do research on this. I’ve had probably five or six [students] that have done honors theses about cryptography or coding theory, and they’ve gone to get a master’s degree and work in those areas. It’s been very fulfilling,” he said.

That sense of fulfillment spilled into other areas of teaching that he contributed to off of PLNU’s campus. During the summer, he teaches coding theory and cryptography at the Center for Research in Mathematics at the University of Guanajuato in Guanajuato, Mexico. He also returns to his hometown to teach high school students.

“I kept some friendships in Mexico. I have a friend who has this love for high schoolers. He started creating these little camps where we’d get 50 to 60 high schoolers from everywhere in Mexico, and we’d spend a week with them. He put me in charge of about 15 high schoolers, and we spent a week learning the mathematics of origami,” Jimenez said.

For 13 out of the 15 years this program has been in existence, Jiménez returned to Mexico to teach these students. The program shut down due to COVID-19, but they’re trying to get it up and running again this coming summer.

“If we get the funding, I’ll be there,” he said. “There is not very much money, so the budget for those kinds of things have taken a hit. We’re hoping they’ll find a way to fund it. It’s a nice way to give back because certainly I’ve received a lot from Mexico.”

Jiménez intends to retire in the fall of 2024. He said he’s ready for the next chapter of the mathematics department to begin.

“I think there has to be a point where new professors need to come because they bring new ideas,” said Jiménez. “Once you’ve spent 30 years in a place like PLNU, and you’re not exposed to what’s going on in other places, then it’s not good for the new students.”

However, the community he’s helped build within the department will not be changing. His legacy of welcoming all and encouraging exploration in math has left a lasting impression on students and faculty alike.

“The kind of relations that we have in the math department is a big family. It’s a community.”

What is your go-to food/restaurant in San Diego?
Costa Brava in PB or Et Viola North Park.

What’s your favorite spot on campus?
I typically go all the way to the park behind Fermanian. That’s one of my favorites. It has meaning because it was dedicated to [past Vice President of Spiritual Development] Dana Walling. Dana was my color, and he was in charge of the chapel. He always tried to bring diversity here. You can tell the kind of heart he had for everybody. I go there, and it has connections.

What is a fun fact your students don’t know about you?
In high school, I played volleyball. My kids say I shouldn’t play anymore. I had fun playing with students in intramurals. That’s something I did probably two or three times at PLNU.