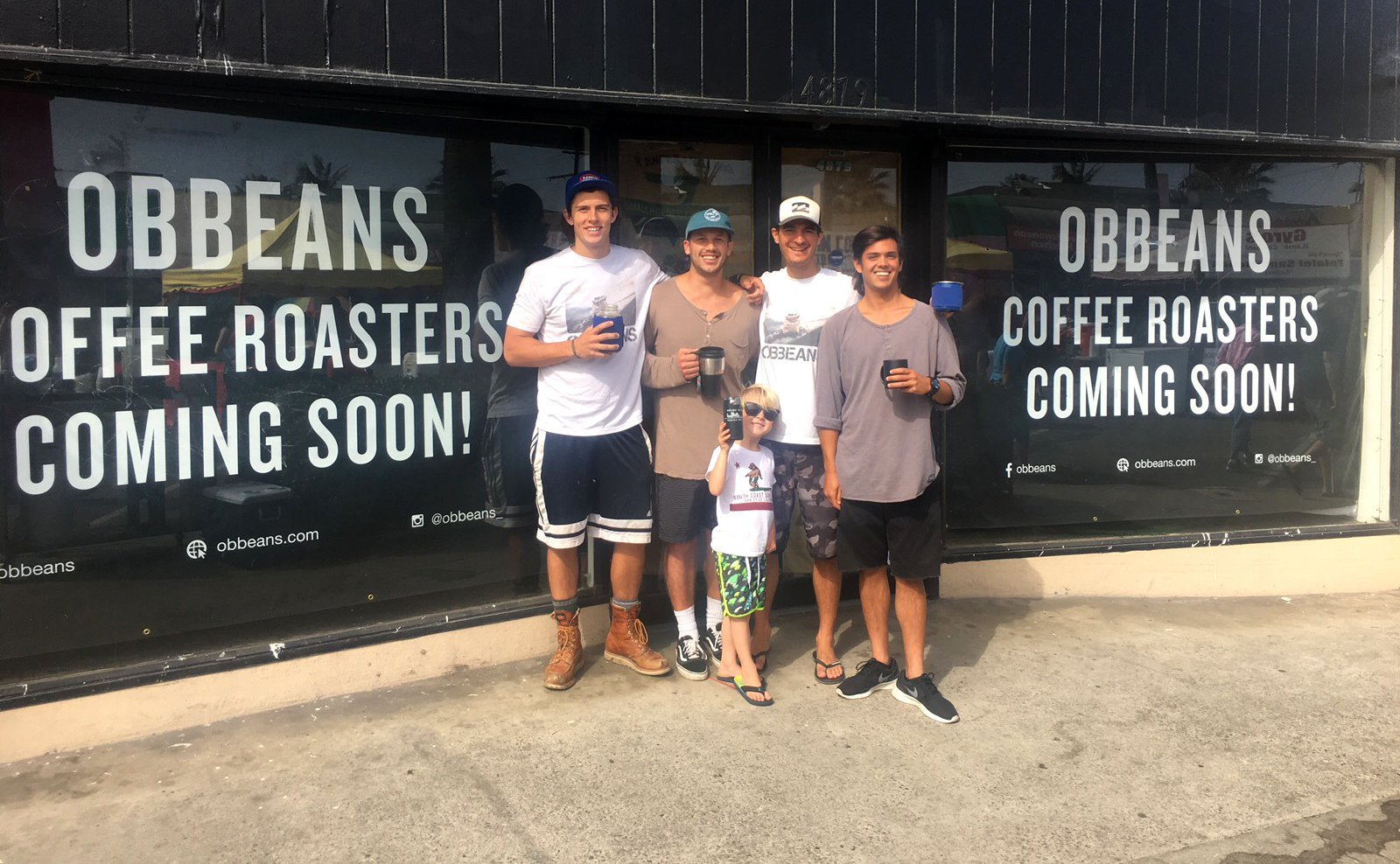 “Whenever you do something big you reach out to your community and friends, and that’s what we did here,” explained Mark Bell. The principal owner of OB Beans Coffee Roasters sits at a table with his three business partners, Ryan Bardelli and PLNU alumni Ben Nease (14) and Taylor Langstaff (15), who share how their journey to do good culminated in a storefront coffee shop.

The large Newport Avenue roastery already fits perfectly within the Ocean Beach and Point Loma communities. The large space, table and bench seating, hand-painted wall art, and welcoming staff all cater to the clientele: anyone looking to relax and gather in a communal space. 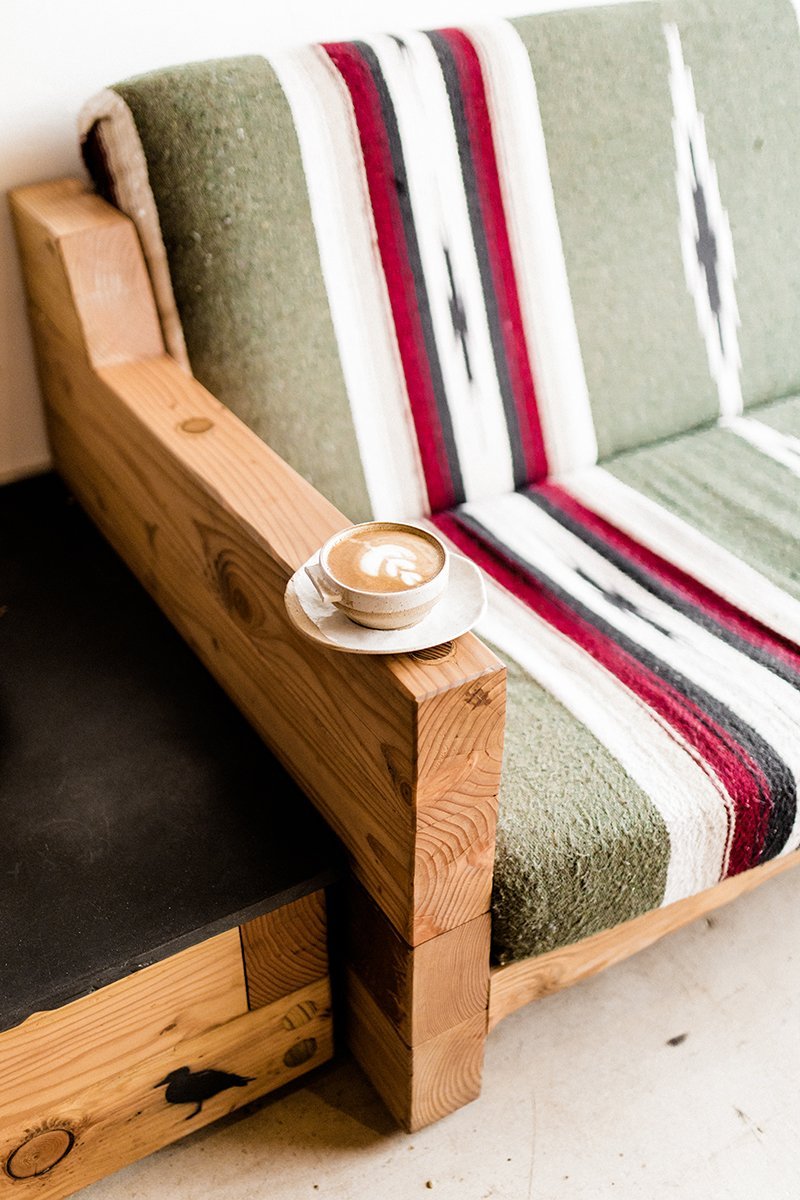 “There’s so much movement going on in a community like Ocean Beach that I think OB Beans provides a unique place to sit and hang out,” said Nease, who is also in charge of sales and marketing for the roastery and shop.

The desire to create a home for anyone wandering down OB’s crowded main street became a motivating factor for everything from the friendly staff and comfortable seating to the mugs, which are handmade by fellow alumni-run business Maek* ceramics.

Watch: MAEK* ceramics owners Ryan Shoemaker (17) and Michaela Maes (16, MBA 17) reflect on the deliberate process of ceramics making that has permeated all aspects of their life.

“Initially, I wished we didn’t have such a big space, but then I realized it fed into our narrative of creating a home,” said Nease. “There are a couple of other coffee shops in the area, but what we have is a home.”

For all four owners, community is a central pillar to the way that they do business. The construction of the space, which took six months longer than planned, was only possible through the help of various friends, family, and local community members. The owners recall friends coming in and helping with anything that still needed to be finished.

“There are a couple of other coffee shops in the area, but what we have is a home.”

But construction did finally wrap up and in May 2017 OB Beans Coffee Roasters opened to the public. Since then, Bell, Nease, Bardelli, and Langstaff have made a commitment to trade directly with their producers and to support nonprofits, exemplifying that doing good is just as important as making good coffee.

“We want this place to generate an incredible amount of good. We’re passionate about coffee but more passionate about doing good,” said Bell, who frequently lets out the shop to be used during local town hall meetings or Young Life gatherings.

As a direct trade business these entrepreneurs are also a part of a new breed of ethically aware business owners who prioritize relationships when sourcing beans. By using this method, OB Beans ensures that their farmers are offered a fair price for their product.

“These people [coffee farmers] are putting their heart and soul into growing coffee and we’re doing the same on our end,” said Bardelli. “Direct trade means they’re treated right.”

By maintaining direct relationships with farmers in Guatemala, Mexico, Costa Rica, and El Salvador, OB Beans joins a burgeoning breed of coffee roasters known as the “third wave” which focuses on creating a strong relationship between source, shop, and consumer. This benefits the shop, which has a direct line to the product, while also ensuring that the farmer gets paid at a good rate.

“This is more than dropping off some water or food to people,” said Langstaff, who handles international relations and maintains relationships with farmers. “Hopefully this shop can be a model of more sustainable aid through a business relationship.”

In addition to direct trade, the shop currently supports three non-profits: Ride for Water, Young Life, and iThinkBig. And while they’ve had to scale their donations in proportion to opening a brick and mortar location, they’ve never compromised on the heart behind their actions.

“As we grow, we recognize that we’re running a real business and that it’s unwise to marry ourselves to a percentage,” said Bardelli. “But just because we don’t have a lot of money doesn’t mean we don’t have resources, and we will always use our space and our platform to do good in the community.”

Most recently, OB Beans donated all of the coffee for the OB Main Street Association’s annual pancake breakfast on the Ocean Beach pier; the event supports Ocean Beach’s toy drive during the holiday season. And executive director of OB MainStreet Association, Denny Knox, is more than happy to have OB Beans join the community as one of Newport Avenue’s mainstays. 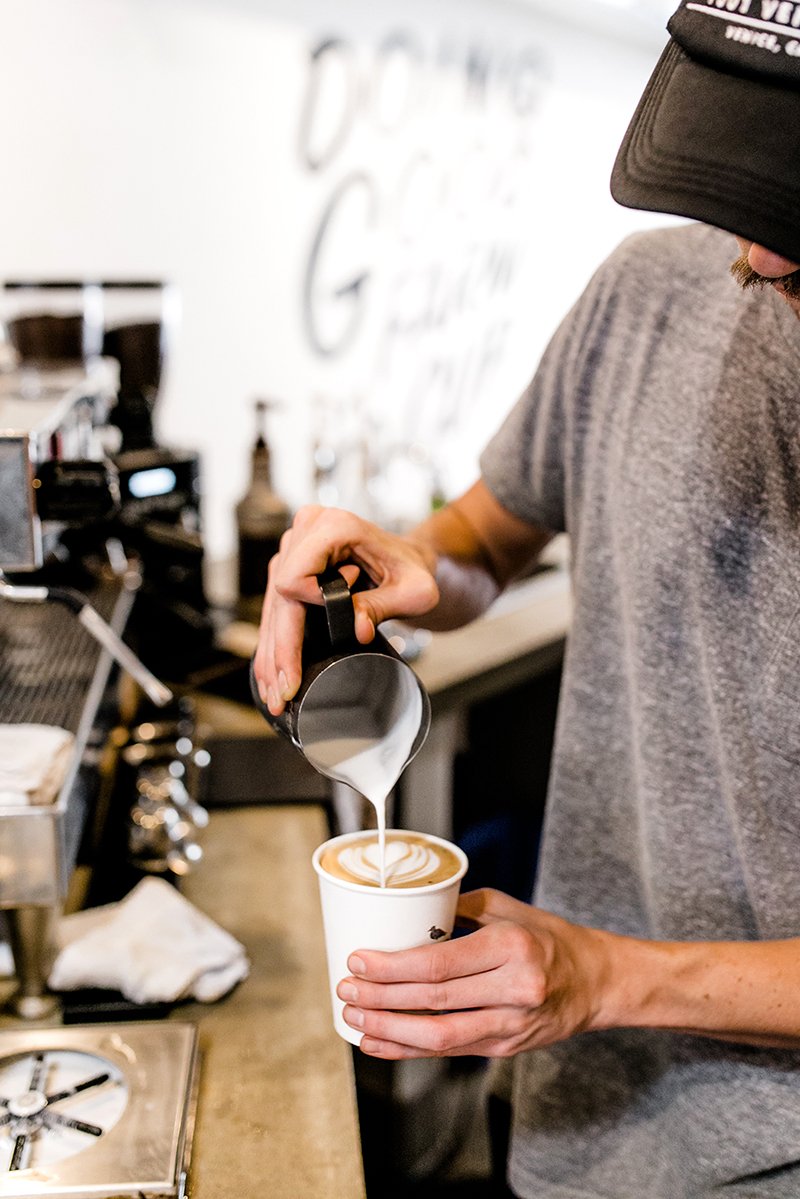 “Whenever I walk into their establishment, it is always hopping with customers and I know they are a wonderful addition to our small community,” said Knox.

And after making it through their first San Diego summer without air conditioning, Bell, Nease, Bardelli, and Langstaff discovered that community engagement in a small town like Ocean Beach flows both ways, especially when a local business is in need.

“Whenever I walk into their establishment, it is always hopping with customers and I know they are a wonderful addition to our small community.”

“We talked about it as a team and said we don’t want to ask anyone else for money,” said Bell. “We knew this one needed to be on us, but we just had no idea how we were going to raise the money.”

The owners were looking into adding air conditioning to the store, but knew they would have to raise thousands of dollars for the unit and installation. As the conversation continued, it became apparent that this installation was also an opportunity to give the community a unique stake in the business.

“I remember saying, ‘What if we put it out to the community and use it as a rallying point?’” asked Bell. “’Maybe we can make this happen.’”

Before long, regulars were coming in for their usual drinks and handing checks and cash to the staff to go toward the air conditioning project. After a few months of social media outreach, online donations, and one cornhole tournament, the HVAC system was fully funded and installed.

“When you ask for help you invite people into your story; and it’s hard and it involves humility, but I think you have to involve your community like that when the need is great,” said Bell.

At just over a year old, OB Beans Coffee Roasters will continue to rely on the community it calls home. While the team has talked about expanding to a second location, right now they plan to better organize their current processes and roles.

“We’ll keep grinding, literally and figuratively,” said Bell. “But we’re further ahead than most businesses at one year, and I know we have a good corner on the market. We’re the local guys.”

Related Article: PLNU alum Nate Cadieux (08) works to build toward his dream of a more connected and relationship-based San Diego.