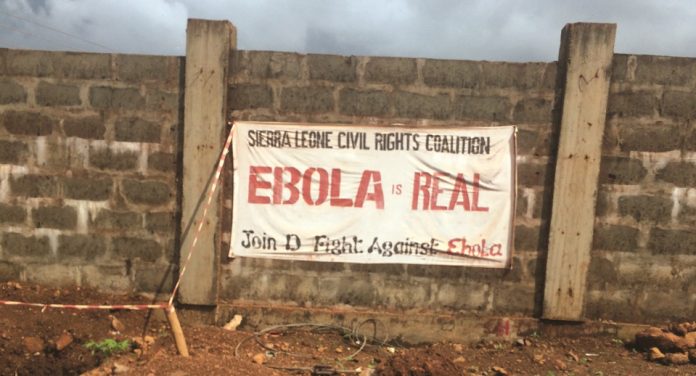 When Pieter Baker (10) first stepped foot on Sierra Leone soil in November 2014, it did not look as though Ebola had spread. Civilians lined the streets in the marketplaces, selling and buying goods. People rode bicycles with calm demeanors. It was business as usual. Other than the large red signs plastered on every street corner reading, “Ebola is real,” the place didn’t look like the site of an epidemic that had been killing thousands.

Though he knew there were a high number of cases in the area, it wasn’t until he saw tarps set up to treat patients that Baker first glimpsed what was happening behind the scenes.

“I hadn’t seen anyone who was sick,” Baker shared. “Then, when I was being given a tour by a healthcare worker, I was shown a treatment center in the Bo district where people would be taken if they tested positive for Ebola. As we were walking by a morgue set up next to the center, the wind blew the tarp flap up, exposing four or five bodies on tables, and I thought, ‘Wow, this is real.’”

Baker traveled to West Africa with the International Rescue Committee (IRC), a nonprofit humanitarian organization. Before this three-month position with the IRC, he had been living with his wife, Monica, and newborn baby, Max, in New York City, working for Columbia University. They had just moved back home to San Diego when he was offered the West Africa position. He and Monica decided to accept.

With a background in public health and epidemiology, Baker was prepared to serve. He received his bachelor’s degree in biology from PLNU and his master’s degree in public health from Columbia University, where he studied infectious disease epidemiology, emerging infections, and surveillance, and worked in the health department conducting disease outbreak and routine infectious disease surveillance.

As the IRC surveillance manager, Baker became a part of the Ebola Rescue Consortium, a group of 11 NGOs working throughout West Africa, of which the IRC was the founding and leading organization. The consortium worked alongside governmental organizations as well, such as the United Nations, World Health Organization, and Center for Disease Control. Together, their many positions were centralized in an isolated command center in Freetown.

But, as is common in a crisis, job descriptions changed overnight.

“People hand you responsibilities in an emergency,” Baker said. “I’ve worked in a lab where there were very defined protocols, and this job was nothing like that. Some people were only there for a month or a few weeks on assignment, but if you were present and stepped up, you were given a lot, no matter your background.”

Baker was primarily in charge of surveillance activities in all 14 of the country’s districts, which involved training surveillance teams and making sure health workers had what they needed—such as vehicles, fuel, and cell phones. Sometimes, he said, the work felt overwhelming.

The number of cases was rising and necessary information was at a minimum, so Baker and one other IRC health staff began running Ebola case investigations—meeting locals, conducting interviews, calling ambulances, and gathering burial teams if needed.

“It was much more hands-on—I mean no touching, of course,” Baker shared. “I was actually doing the fieldwork. We were doing on-the-fly, back-of-the-napkin statistics, trying to figure out where to move people to resources.”

Soon enough, Baker began to see why the information was so difficult to gather, and why the spread of Ebola was so challenging to control: sometimes information he received from locals was confusing or led to dead ends—and medical help challenged cultural practices.

For example, in West African culture, most of the population honor and care for dead loved ones by washing the bodies, then collecting the water to wash their hands together, Baker said. This practice creates an environment where the Ebola virus can be transmitted instantly. Though healthcare workers communicated the need for safe burials, many locals began hiding dead bodies instead.

“Ebola takes advantage of the culture,” Baker said. “There’s a quote made famous by Louis Pasteur, ‘The microbe is nothing, the soil is everything.’ The ‘soil’ here is West African culture. You can’t fight the disease unless you understand the context.”

According to Baker, Ebola is easy to control on paper—if people are sick, remove them from the community, and don’t touch dead bodies—but in reality, cultural practices make it extremely difficult to control. Ebola symptoms also mimic other diseases, such as yellow fever and malaria, making locals reluctant to alert healthcare workers that someone in their family caught the virus.

“There was a lot of fear,” Baker shared. “Locals didn’t know where they were being taken in the ambulance. They would hear terrible stories, some of which were true and some of which weren’t. But if they could get help at a treatment center, they had a higher chance of survival. Still, if it was my kid who was sick with a fever, I don’t know if I would call the ambulance right away either. That’s almost admitting a death sentence. I totally get it.”

Though locals were reluctant to change their behaviors, the consortium and medical staff continued to communicate earnestly and respectfully. Over time, West Africans started to understand their unsafe burial practices were harmful to their society and they adopted safe practices.

The major project Baker spent his time developing in Sierra Leone was a community-based surveillance system. Prior to its creation, Ebola cases were detected in three ways: individuals would be screened at a healthcare facility and admitted if they fit the case definition, locals could call the public hotline to report a sick person or body, and Baker and his team would track all contacts made by sick individuals for 21 days to see if any developed symptoms.

He wanted a system that was much more decentralized and efficient.

Baker and his team created a plan to involve community members in the surveillance system. These locals would report on Ebola-suspicious events, such as instances when a traditional healer became sick and died, a traveler entered or left a village and became sick and died, an unsafe burial took place, or two or more people in the same household became sick and died within a short amount of time. Baker had previously been investigating cases throughout the districts, but oftentimes it was too late. Many individuals had already died or caught the disease. This new surveillance system caught cases earlier, connecting people to care before the virus spread.

Most districts had a community healthcare worker network before the Ebola outbreak—working on malaria, vaccination, and other health programs—but when Ebola arrived, these programs stopped, and the networked healthcare workers had not been integrated within the Ebola response. Although they were ideal candidates for the community-based surveillance system, they weren’t initially recruited as response-team members.

“It was beautiful,” Baker shared. “We had this big network of individuals committed to their community who were not going to move after the outbreak ended. We wanted to build something that would stay even after Ebola left. Right now, the surveillance system is designed specifically for Ebola, but the idea was to build a system to help identify other diseases that would be sustainable and wouldn’t dissolve once the money left.”

Baker’s community-based surveillance system has since been implemented by a variety of governmental organizations, and has helped to decrease Ebola cases dramatically. Baker continues to stay in contact with his team in Sierra Leone, and although he won’t be interacting with Ebola patients at home, he said he is very aware that people are hurting everywhere.

“The world is messy, and we all have a need for something redemptive, something more,” Baker explained. “Though their symptoms aren’t always as obvious to see as Ebola’s, pain, depression, and anger are also difficult ‘microbes’ to identify and fight— microbes that also rely on a certain type of soil to thrive. It’s much more powerful to change the soil; to change the context; to do what you can to step in and create a culture of love, respect, openness, and grace. A lot of suffering won’t survive in that kind of soil. The microbe is nothing; the soil is everything.”