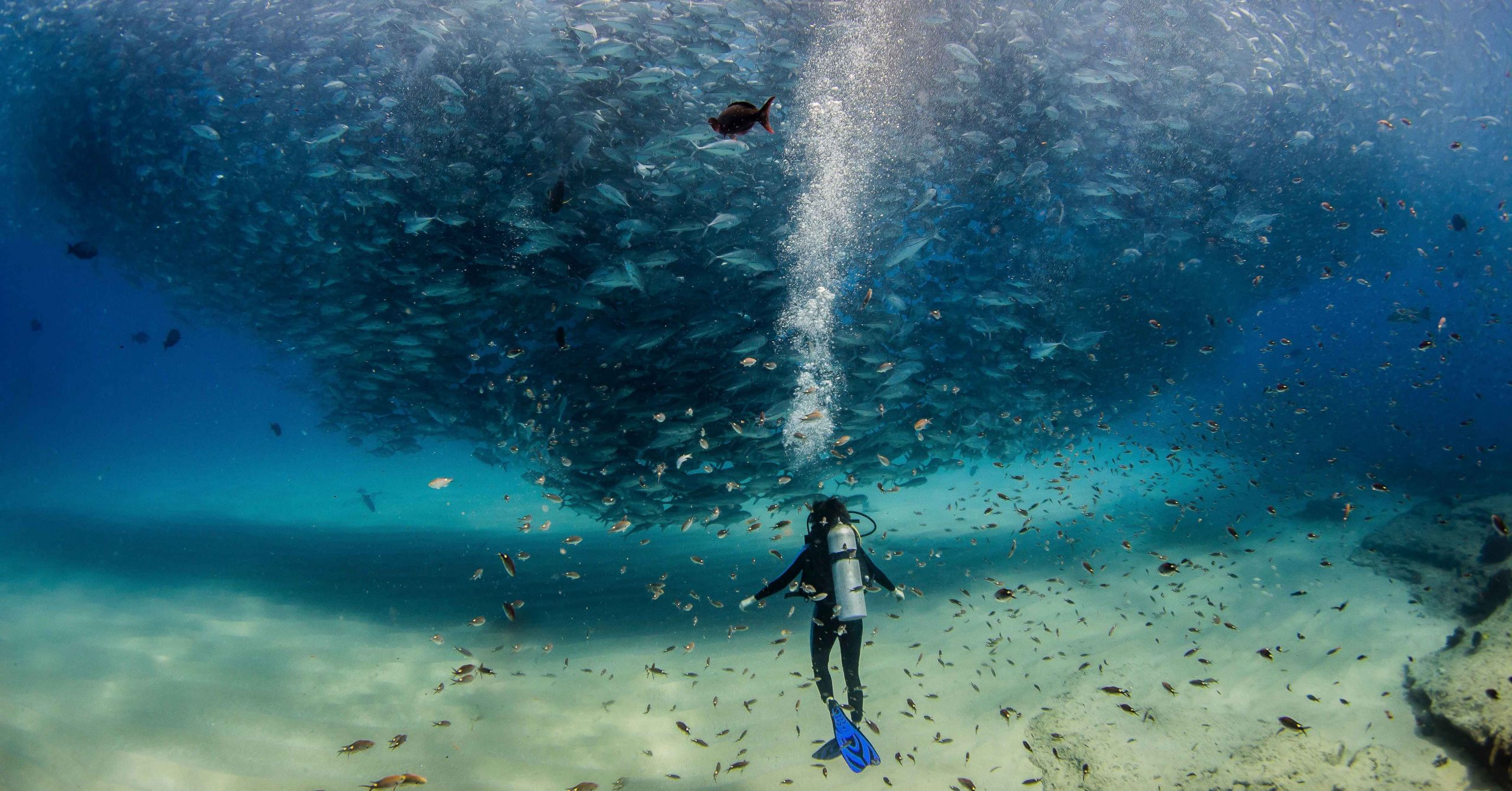 Episode four of Netflix’s Emmy Award-winning series, Our Planet, “Coastal Seas,” opens with an underwater shot of a thriving coral ecosystem. Large predatory fish and rays dive among a massive school of anchovies as Sir David Attenborough narrates how such a complex ecosystem sustains itself. But less than twenty minutes later, Australia’s beloved Great Barrier Reef begins to bleach and die off before our very eyes — a warning of what’s at stake if humanity continues its current rate of environmental degradation.

Seconds later, the scene shifts once more to the California coast, where sea otters and sheepshead dive among an immense kelp forest, plucking the urchins feeding off the kelp fronds’ roots. For PLNU biology alum Jeff Hester (12), the balance of this intricate ecosystem is worth preserving to avoid a fate similar to that of the dying coral reefs. A critical part of that preservation, Hester believes, comes with educating others and exposing them to those ecosystems through programs like Our Planet — after all, he’s one of the cinematographers who filmed it.

As an assistant underwater and aerial camera operator for Silverback Films, the production company behind Our Planet, Hester helped film three of the series’ eight episodes. In addition to the kelp forests in “Coastal Seas,” he also filmed manatees and underwater caves in Florida for “Freshwater,” as well as blue whales and bluefin tuna off the coast of Baja California in “High Seas.”

From a young age, Hester developed a strong relationship with the water, exploring the rivers, lakes, and wildlife of the Willamette Valley surrounding Portland, Oregon, as well as trips to the tide pools along the frigid Oregon coast with family. After beginning his freshman year of college studying marine biology in Eugene, Hester realized he wanted to be closer to the ocean, transferring to PLNU. Though the university had no degree specifically in marine biology, its proximity to Sunset Cliffs Natural Park, along with the biology department’s affiliations with esteemed local labs and programs, would make due (a scholarship running the decathlon with PLNU’s track team was a helpful determining factor too).

“It’s easy to feel like there’s a massive expanse and separation between the impacts we’re having on the natural world as humans,” he said. “But studying the animals and even finding pieces of plastic in their stomachs throughout the entire food chain, we’re a lot closer to the ocean than we think.”

In addition to his love for the ocean, Hester had also developed an interest in photography as a hobby. Coming face to face with humanity’s impacts on the ocean, Hester soon began to think he could better protect those ecosystems by using his photography to give them a voice of their own.

“The stereotype of scientists is that they’re poor at communicating their ideas to the public. So I thought I’d help marry these passions of mine — the ocean, science, camera work, and conservation ecology — and show people their impacts on the planet and ecosystems.”

Hearing about an underwater scholarship sponsored by Rolex, Hester thought he’d at least apply for what sounded like a dream job. Not long after starting his first job post-college job with the NOAA marine mammal genetics lab, Hester heard back from the Our World-Underwater Scholarship Society and discovered he’d been selected as one of three recipients of the 2013 Rolex Scholarship.

The year-long program — according to its website — is designed for young men and women with “the potential to make significant contributions to the underwater world” through hands-on experiences in an underwater or aquatic-related discipline. This can vary from participating in fieldwork, research, or lab assignments alongside distinguished scientists, engineers, and academics.

Hester took the opportunity to work with dive instructors, photographers and filmmakers, and industry experts to continue developing his craft and learning to better tell stories of science and conservation.

I thought I’d help marry these passions of mine — the ocean, science, camera work, and conservation ecology — and show people their impacts on the planet and ecosystems.

“The scholarship has been running [since 1974], so they’ve got a pretty deep network of people in film or other industries,” said Hester. “They’re pretty open-ended on the direction of how you spend the year, and I really wanted to explore camera work. So they hooked me up with a lot of different sponsors and equipment, and that’s how I focused most of my activities during the year.”

If there was a client Hester wanted to work with, the scholarship established the connection. From an initial underwater photo and video workshop in Bonaire off the Caribbean coast of Venezuela, to learning to dive in underwater caves on the Bahamian island of Abaco, Hester learned the basics of photography and diving, as well as how to manipulate composition, light placement, post-processing, and editing specifically for underwater shots.

“I came to the realization that I could do this as a career,” Hester discovered.

From Catalina Island to South Africa to Australia to an expedition in Antarctica with National Geographic, the scholarship allowed Hester to explore the world while also learning to document it.

When the year ended Hester knew he still had much more to learn. But he had built up quite a network of connections to help him continue breaking into the industry. He started building up his portfolio assisting other camera operators and producers; went on to freelance for clients like National Geographic and Red Bull, and he even filmed several episodes for Discovery Channel’s Deadliest Catch in Alaska. Ultimately, Hester landed a role on The Hunt, a Netflix series produced by Hugh Pearson, who would go on to hire him again for his larger upcoming project, Our Planet.

“Starting with him and having him mentor me along the way to the point of no longer just being an assistant but a lead in making decisions about how we wanted the series to flow,” Hester said. “It was a big deal in my career.”

Hester is the first to admit he’s both privileged and grateful to work with incredible ecosystems and wildlife in ways most people will never experience. But with the responsibility of accurately depicting the natural world to those audiences, Hester tries to ensure his own lifestyle habits and choices stay true to his own goal of guiding audiences toward conservation.

“One of the continual conflicts in making four-year projects like this is [that] traveling all over the world to do that, your carbon footprint becomes so large. You’re raising awareness and getting people excited about nature and the environment in some regard, but at the end of the day, you’re breaching conservation. So one of the things I tried to be more mindful of is working more locally.”

Doug Anderson, another lead cinematographer and producer of Our Planet appreciated Hester’s commitment to filming and working locally. In a separate interview, he shared: “That is a part of his raison d’etre — to make sure that at least, in some way, his work is as good to the planet as he can be. And I really respect that. I think it will become a big part of the conversation of what we do moving forward.”

When I’m sitting underwater and observing these incredible environments and the life happening around me, I believe God gave us this planet to protect and care for. What I hope to do with my work is bring others into those places and get them to care the same way I care about them.

While the goal of Our Planet is to better educate people about our relationship with our ecosystems, Hester offers several small steps we can take to go even further in caring for marine wildlife. A good start is becoming aware of and reducing the number of single-use plastics that easily end up in the ocean, he says. This includes items like plastic bags, silverware packets, and water bottles. Hester also advocates for using the Monterey Bay Aquarium’s “Seafood Watch” mobile app to better track the seafood we purchase and choose products that don’t support unsustainable fishing practices — one issue he believes is most dangerous to ocean ecosystems.

“One question that always [guided me] was ‘why should I care about it,’” Hester recalled back to his earliest lessons at PLNU. “My professors at Point Loma really played a big role in how I see the world and the interface between faith and science — [that] they don’t have to be mutually exclusive. When I’m sitting underwater and observing these incredible environments and the life happening around me, I believe God gave us this planet to protect and care for. What I hope to do with my work is bring others into those places and get them to care the same way I care about them.”

Our Planet was recently awarded “Outstanding Documentary (Nonfiction Series)” at the 71st Emmy Awards. Hester’s work with Silverback Films in the episode “Coastal Seas” was also nominated for “Outstanding Cinematography (Nonfiction).” Looking forward, Hester is currently finishing up a VR project with his own production company, Diatom Studios, to give users an immersive diving experience with humpback whales in Tonga. Long term, Hester plans to continue using his craft of photography, filmmaking, and storytelling to connect people with our planet’s incredible wildlife and ecosystems.