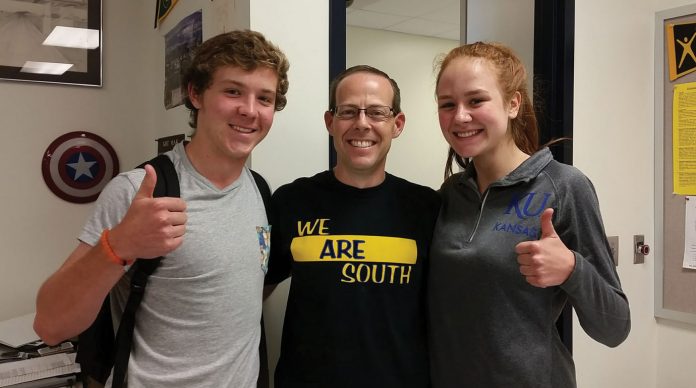 A teenage Dennis Burkett (95) stares longingly at the clock on the wall, already waiting for the bell’s sweet release from the dreaded high school chemistry class that’s just begun. Three chalkboards filled to the brim with vocabulary from this week’s lesson stare dauntingly at him as he reluctantly lifts his pencil to begin the laborious task of copying each definition into his notebook — a routine to which he’s become far too accustomed.

Fast forward almost 30 years. Burkett now stands on the other side of the classroom, but not to drill his students on vocabulary. Rather, he directs them outside, where they proceed to launch model rockets, using geometry to estimate the maximum height and timing the ascent to calculate its velocity. Or he distributes vials of “desiccated alien blood” (copper II sulfate) and challenges his students to make solutions to treat their alien patients. Or he morphs into Electron Man, complete with rainbow bow tie and lab apron cape, to illustrate the functions of electrons.

Whether it’s dressing up as a not-so-legendary superhero or making chemistry-related parodies of popular Disney tunes, Burkett certainly brings a flair to the high school classroom. His passion for teaching  chemistry actually stems from his own negative experience with the course in high school, similar to the one described. After having a less-than-inspiring teacher, Burkett found himself turned off from the subject, a trend he has seen recreated time and time again among students.

Burkett carried this stigma with him to PLNU, where, in an effort to avoid chemistry, he began as a physics and engineering major. Ultimately disenchanted with the theoretical side of the subject, he returned to the analytical approach chemistry offered and graduated with a bachelor’s in chemistry.

In addition to his time in the classroom and lab, Burkett stayed active in the campus community, participating in organizations such as LoveWorks and Wings of Praise, a vocal ensemble. It was his experience in missions that inspired him to continue his education at Nazarene Theological Seminary, earning a master’s in theology. While he considers this part of his journey to be invaluable, he once again felt a pull back to the systematic nature of chemistry. Not interested in the level of research a graduate degree in chemistry would require, but rather feeling a call to teach, Burkett decided to pursue a bachelor’s in secondary education at the University of Missouri Kansas City, followed by a master’s in technology-enhanced teaching from Mid-America Nazarene University.

Venturing into the high school chemistry classroom, Burkett admits there was a learning curve, prompting him to teach in the more traditional format that had been modeled for him. By his third year, Burkett was convinced he was going to teach chemistry differently, and so began his quest to present concepts in new ways. In an effort to not only answer but eliminate the perpetual, “Why do we need to know this?” question, he started basing his lessons around real-world examples of chemistry in motion. Discussing the science behind things such as rockets, sports drinks, forensics, nuclear and solar energy, and counting calories, Burkett helps students see how chemistry is relevant and plays a vital part in things they see, use, and hear about on a daily basis.

“I really enjoy redeeming my own experience with chemistry for my students,” he said. “Science is so real and tangible and applicable to life, and I want them to see and appreciate that.”

His unconventional approach has garnered high praise, earning him not only prestigious awards such as the 2011 Presidential Award for Excellence in Math and Science Teaching — the nation’s highest honor for teachers of mathematics and science, presented in Washington, D.C., in coordination with the Office of the President, the Department of Education, and the National Science Foundation — but also the respect of his co-workers, even prompting one of his fellow science teachers at Olathe South High School to begin to adopt his nontraditional classroom methods. Perhaps most rewarding to Burkett is the opportunity created by his relatable teaching style to inspire a love for science in his students.

Related Article: Thinking about becoming a teacher but unsure where to start?

While Burkett must tread carefully when it comes to sharing his faith in the public classroom, he uses whatever opportunity he is given to share why he believes the scientific and the spiritual intersect so perfectly.

Moving forward, Burkett is most excited to offer his students more opportunity to integrate themselves into the community and find what they are most passionate about. Inspired by Google’s 20 percent time policy, where employees are able to spend one day a week on projects outside of their normal job duties, Burkett is encouraging his students to get involved in an area completely unrelated to chemistry in which they can make a positive impact on the world around them. This passion project, he hopes, will not only help them develop their interests in ways that benefit others, but will also help them appreciate their time in the classroom even more.