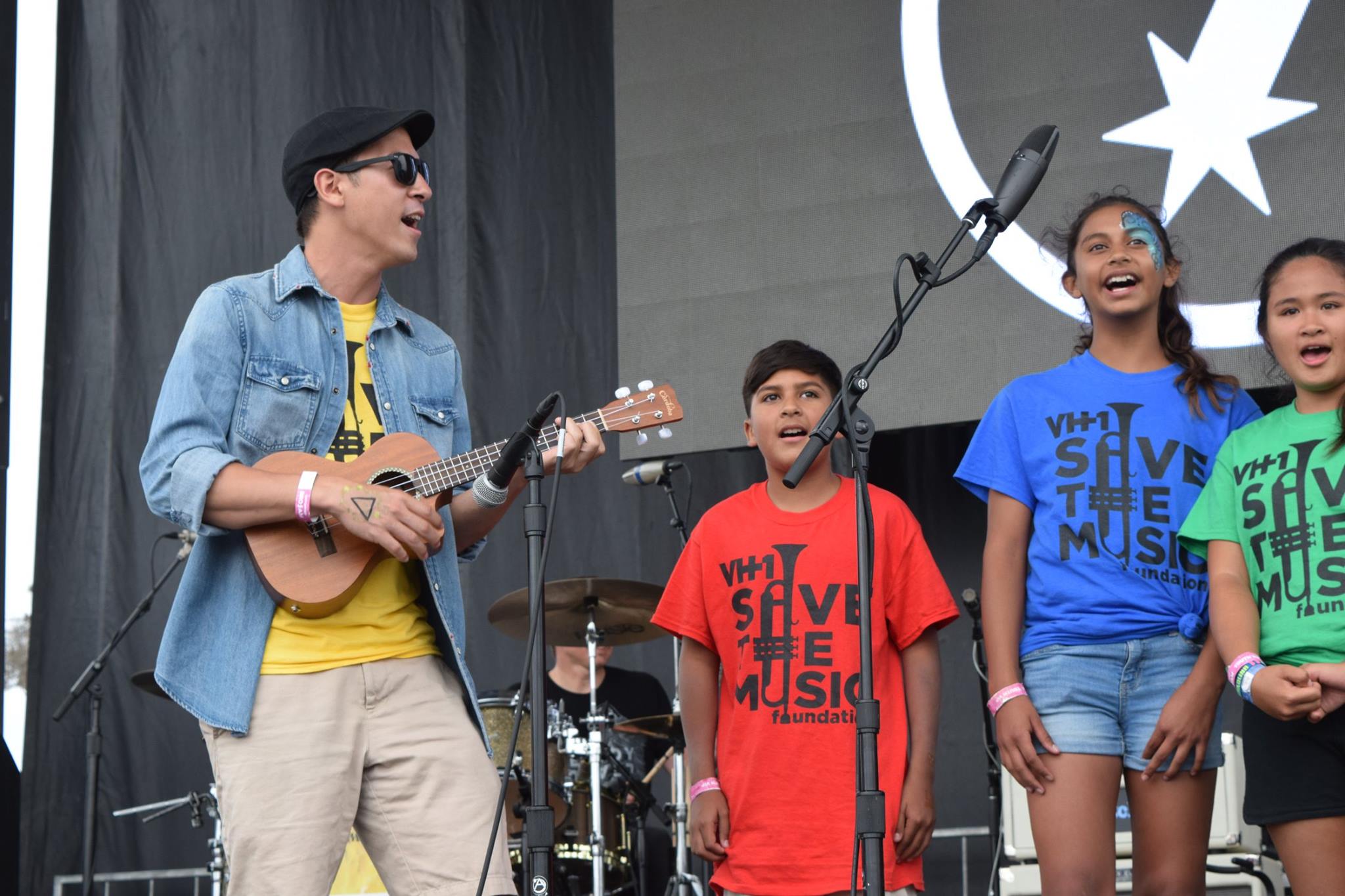 Music composition grad Jonathan Seligman (12), the music teacher at Casillas Elementary school in Chula Vista, was at a distanced parade last spring, cheering on his students, two weeks after schools closed due to the pandemic. One of his students was holding a sign with Bob Marley lyrics: “Don’t worry about a thing, cause every little thing is gonna be alright.”

Inspired by this, Seligman thought, “What if we tried making a virtual choir off of this, having the teachers sing this to their kids?” After 80 hours of compiling and editing, Seligman shared it with the community, and people were “very warmed up by it,” he said. “It turned out great.”

“While everyone was tossing ideas of what to do at the start of the pandemic, and also trying to process their own grief, I recognized that I was privileged enough to have skills not just in music but in Photoshop, and I was willing to lean in and learn how to spend time in videography and video editing,” Seligman said. “I created a lot of online lessons. I got inspiration from some of my favorite YouTubers… and every week I created four videos for different grade levels, and sent it out to my students and to the community abroad. It was crazy to hear and see; I got responses from students not just at Casillas but at other schools as well, saying how they were touched.”

Seligman just finished his sixth year teaching music at Casillas Elementary. After getting his master’s in teaching and a dual credential in music and special education at Point Loma Nazarene University, he taught at Monte Vista High School for a year before getting a call from the coordinator of the Chula Vista school district who invited him to teach elementary.

“Every year has been a journey,” Seligman said. “Chula Vista had zero arts programs for 35 years, so I was starting from scratch. There were some boomwhackers in the shed, so I pulled them out, and the community was very supportive, so I got some recorders. I was really learning as I went because high school was what I was trained for, not so much elementary. But every year, something cool and something that I never expected has happened.”

One year, Seligman’s school got the Save The Music Foundation grant, which allowed them to start a band program.

“The band Switchfoot works closely with the Save The Music Foundation, and my VAPA [visual and performing arts] coordinator knew that I’m a fan of two things: Nintendo and Switchfoot,” Seligman said. “She pulled some strings, and I met the group and showed them a song my choir was working on, which was the song ‘Float’ from their album. They said, ‘We love it, we’d love to collaborate with you.’”

Switchfoot surprised Seligman’s choir in the spring of 2017 by stopping into their class and inviting the 6th graders to perform at their annual BroAm music festival. “I was honored because they were a formative group for me growing up, and for my students to partake in that was just mind blowing,” Seligman said.

In the Chula Vista school district, Seligman helped spearhead the collaborative concert, in which choirs from different schools come together not as a competition, but to perform and create music together. It’s been going on now for four years.

“So often I see a lot of teachers go to [choir] festivals and whatnot, and that’s good, but they can breed a sense of competitiveness,” Seligman said. “I’m not a proponent of that, as music is not about competition but about putting art together. One of the best things about Chula Vista is I get along really well with my colleagues, so we created a concert that’s not a competition, but an honors concert where everyone can perform together.”

Seligman, who grew up in San Diego, began pursuing a music composition degree at PLNU in 2008. After taking an AP Music Theory class in high school, he learned that “music is more than just feelings. There’s an actual science behind it, a whole culture behind it,” he said. While at PLNU, Seligman had plans to get his doctorate in “music ethnoecology, or the study of music in different cultures. For me, specifically Filipino music, as I am mostly Filipino.”

Being a college professor is still something Seligman would like to do eventually. Being a music educator, he said, “whether that be in college, high school, or elementary, is for me the way I can best shine God’s light, inspire the world, and cast the gifts that God’s given me.”

Music, to Seligman, is a tool to help people “learn to navigate this world.”

“Music is great social/emotional learning,” he said. “I make sure my kids sing not just American folk songs, but songs from the Philippines, songs from South Africa, etc. It’s helping the student understand that the world is bigger than their four walls. My school’s a very sports-heavy school, and oftentimes you’ll see the quiet child who doesn’t necessarily see themselves on the football field, but they see a sense of belonging in the choir room, and that warms me up.”

For PLNU students hoping to pursue a career in music education (or in any field, Seligman said), his advice is to find a community, “create it, and foster it.”

For PLNU students hoping to pursue a career in music education (or in any field, Seligman said), his advice is to find a community, “create it, and foster it.”

“[Community] definitely was a buzzword during my time in Point Loma chapel, but there is a deep sense of truth behind it. You cannot get anywhere without help from people around you.”

Seligman and three of his friends, including PLNU alumni Marc Keehmer (12) and Crystal Pridmore (B.A. 08, M.A. 14), formed a podcast called Chaotic Harmony, where they share stories and talk about “the growth and pains of being a music educator.”

“Oftentimes when you’re a music educator you have to create systems that don’t exist,” Seligman said. “I mentioned earlier the fact that I had nothing in the classroom when I started. There wasn’t a teacher before me that I was following. I was blazing my own trail. Sometimes the trail will not be there for you, and it’s important not to give up, but to see how you can create a program from nothing, and how you can create a community that isn’t there yet.”