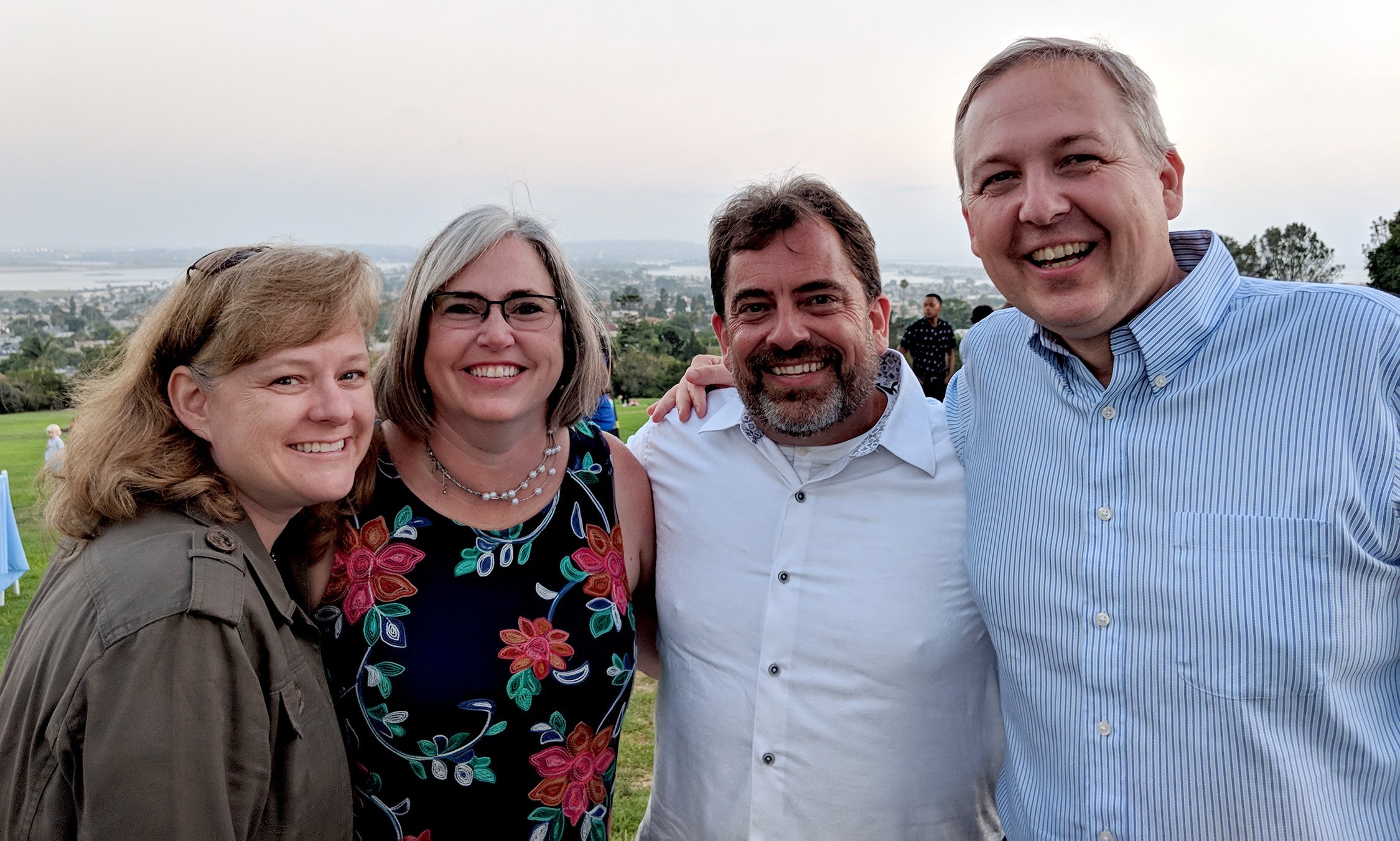 They sit next to each other in PLNU’s cafeteria: Jamie Gates, Ph.D., eyes gleaming, and Rob Gailey, Ph.D., smiling in a red shirt from Eastern Nazarene College (ENC), where they became roommates and best friends. Jamie makes a few not-so-obvious jokes in his dry sense of humor and Rob laughs instantaneously. They literally finish each other’s sentences. The friendship between these professors is rare, the kind that makes outsiders curious of its depth.

Jamie shares how Rob taught him to play basketball in college until one day the student became the master. “That one game, yeah I remember that one game,” Jamie said.

“That was the last time we played I think,” Rob laughed.

From the first moment they met in 1988 — when Rob’s sister thought Jamie was a lost student who stumbled into the wrong dorm room — to the times Rob edited Jamie’s papers because Jamie’s core language was Afrikaans to the time they took a study break late one night with one of their friends and the three boys ended up briefly running around the neighborhood in their underwear to stay awake, their college years were filled with memorable moments that laid the foundation for their friendship.

Both grew up as missionary kids (“MKs”) in Africa, one in eSwatini (formerly Swaziland) and the other in South Africa. From the start they immediately connected.

“MKs are a thing. It’s like a third culture; there’s this secret handshake and knowledge between each other,” Jamie said, straight-faced. “You know if there’s an MK — you can kind of smell them from across the room,” he laughed. “No, but there’s a lot of common experiences. You get each other quicker than other people get you.”

This struck a major chord in these missionary kids and they both knew they wanted to pursue that type of ministry.

They both wanted a huge poster of South Africa in their dorm room, shared the same friends, and were interested in compassionate and student ministries. During their sophomore year, they attended San Diego 89, an urban ministry conference at PLNU and heard from speakers like Norm Shoemaker and Tony Campolo, who asked attendees why they weren’t involved in the lives of prostitutes and poor people. This struck a major chord in these missionary kids and they both knew they wanted to pursue that type of ministry.

Though the two studied different disciplines, Rob business and Jamie psychology and theology, they pursued God’s heart the same. Frequently, they stayed up late in their room, hashing out what they believed about racism, power, and topics of faith. Once, they spent hours mulling over a question about Mother Teresa and whether or not true altruism existed.

Another time, after the theater department put on a play with non-black actors using face paint to represent black caricatures, a derogatory practice called “black-facing,” Rob and Jamie engaged in conversations together and with the entire campus about racism and representation. This especially stirred Jamie as he had recently come out of Apartheid in South Africa.

“This made for difficult conversations on campus,” Jamie said. “It was a tough time, but we leaned into it. We were like, ‘Let’s figure out how to bridge, how to have conversations.’ It was hard.”

These meaningful, important conversations continued into their years after college, when Rob and Jamie went to seminary. By this time, they had both married their college sweethearts, but would still call each other every day after classes.

“My wife remembers telling [Jamie’s wife] Michelle, ‘I can’t believe these guys. They’re in classes all day long, and then when they get home they call each other and talk for three hours,’” Rob laughed.

“’They pick up the phone and they talk more!’” Jamie added. “She just wanted to be known as the favorite roommate.”

It wasn’t until after seminary that things started to shift for the two friends and their directions veered significantly.

Rob and his wife, Wanda, went to Malawi to serve as missionaries involved with economic development and Jamie enrolled in one of the top doctoral programs in anthropology at the University of Florida. Jamie’s choice was rooted in a need to journey out of the Church to learn more about the world. As he learned more, he began questioning certain aspects of the history of the Church, including issues of justice, race, and divisions.

“I sort of took a step away,” Jamie explained. “In part in criticism, I was sort of standing outside the Church itself saying, ‘There are some lenses we need to maybe develop to be able to see ourselves better.’”

Related Article: Professor Jamie Gates’ work of exposing and getting rid of the dark underbelly of human trafficking in San Diego.

Then, despite the forward movement each was making in his life and career, everything suddenly skidded to a halt.

News came that Jamie’s younger sister was very sick. She was attending ENC and had to be rushed to the hospital. Only 13 days later, Rob, who was working in Liberia at the time, read an email letting him know Jamie’s sister had passed away.

Then, despite the forward movement each was making in his life and career, everything suddenly skidded to a halt.

Because of his work contract, Rob couldn’t come back to the U.S. for the funeral and to be with Jamie. He could only pray for him.

“I remember sitting on the bed in the hotel, crying, talking to my wife,” Rob said.

In addition to the pain he felt for his best friend and his family, Rob was worried this would be the last straw for Jamie and his connection with the Church. “[I thought] the death of his sister is going to just push him further away from God and I probably lost him as a brother in Christ,’” Rob said.

But Jamie experienced something different.

Jamie was indeed in a wandering space, until 1,100 people showed up at his sister’s funeral. They came from ENC, churches his family had attended along the east coast, South Africa, and a number of other places to come and mourn with the Gates.

The impact it left on him was powerful.

“It was one of those undeniable moments where God said, ‘Carry all of those deep questions you have with you. Carry all of those frustrations you have with me about my Church, but this is also my Church. This is who we are when we’re at our best. And it was like God writing on the wall,” Gates said. “I thought, ‘I want to figure out who that Jesus is. And if that’s the Church, I’m in!’”

A month later, Jamie was asked to interview for a job at PLNU. After much prayer, and help from his wife and Rob, Jamie took on a teaching career at the Nazarene school — a decision he doubts he would have made had he not witnessed such an outpouring of love for his sister and family. He now serves as the director of the Center for Justice & Reconciliation, director of the Beauty for Ashes fund and scholarship for survivors of human trafficking, and teaches cultural anthropology.

A few years later, through an entirely different process, Rob came to PLNU as well. He had been working with World Relief and heard PLNU’s business department was looking for someone with a background in international development and poverty alleviation. He now serves as the director of the Center for International Development and teaches in the Fermanian School of Business. And the two get to see each other all the time since they work in adjacent buildings on campus.

Related Article: Professor Rob Gailey explains that, instead of viewing business as only a means to make money and increase profits, it can play a part within God’s missionary work.

Together, they are a power duo that tackles crucial issues head on, helping one another with the wisdom and tools needed to respond in their individual fields with action, discernment, and faith.

They see their work on two distinct but complementary paths. Jamie describes his as prophetic and Rob’s as priestly. Always one to point out injustices and critique institutions from the outside, Jamie seeks to live out what theologian Walter Brueggemann calls the prophetic imagination. Rob’s work is more directed toward bringing about change within institutions and structures. Having received his Ph.D. in leadership studies, he focuses on the business and microfinance sectors and ways the Church can address global poverty. Together, they are a power duo that tackles crucial issues head on, helping one another with the wisdom and tools needed to respond in their individual fields with action, discernment, and faith.

As often as they can, the two best friends join their students together to promote conversations that deal with issues across dividing lines — conversations similar to the ones they had in college. They hope to inspire in their students respect and care for others who have differing perspectives, knowing it could lead to truly valuable friendships like what they have.

Related Article: Three PLNU alumni’s shared friendship teaches them about what it means to be friends with Christ.

And they have the best things to say about each other.

Given one word, Jamie would describe Rob as generous.

“The magnanimity, the open-handed gift giving and the way he treats people, the way he welcomes people in, the way he’s constantly trying to help me see when I’m really critical,” Jamie said. “He helps me to try to see the generous side of people, in particular, people of means and power. He’s helped me to be careful and gentle [because] he has a long history of being super gentle with people.”

And Rob would describe Jamie as faithful.

“He has been, through everything,” he said. “Whatever he believes in, he believes in strongly and he sticks to it. He’s consistent … I’m blessed and thankful that one of the things he’s faithful to is my friendship and my brotherhood. I’m thankful that because of his faithfulness, he’s been my friend, my best friend.”