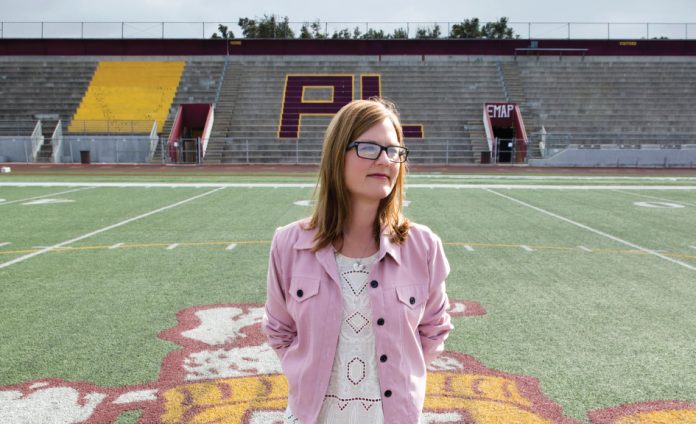 On a Saturday evening in early January 2014, PLNU associate dean of education Dr. Conni Campbell’s 22-year-old son, Brady, was desert camping in Imperial County with old friends from Point Loma High School (PLHS). He was off-roading his truck with two of them. Brady’s friend made a sudden and too sharp turn. The truck rolled. Brady was ejected from the vehicle. Campbell’s phone rang that evening in San Diego, relaying the unthinkable, shattering news that Brady had died at the scene of the crash.

By nature private in her grief, Campbell has clung to 2 Corinthians 1:3-7: “Praise be to … the God of all comfort, who comforts us in all our troubles, so that we can comfort those in any trouble with the comfort we ourselves receive from God.”

“I have read it over and over,” Campbell said. “It is hard to mourn in public when that’s not who you are and when you have to remain strong for your surviving children. But it is important to create that fabric of mutual support and comfort within a community. You won’t really know me if you don’t know this part of me. Creating that fabric together is something I have had to learn.”

Campbell grew up in the Point Loma neighborhood; she attended PLHS and the University of San Diego. She took her kids to the same ball fields where she played in her youth. During her long career in public schools, she commuted north.

“I was hired as a bilingual teacher in Encinitas,” she explained. “I’ve held several different positions, all in that district. I was ultimately an elementary school principal. I spent 20 years there, and then I came to PLNU.” Campbell has taught at PLNU since 2004 and became full time in 2007.

As a principal, Campbell always strived for an atmosphere that was caring and connected, but also kept her personal and professional lives appropriately separate. “You’re close with your teachers and with those parents—but it’s healthy to keep just a little professional distance,” she explained.

Just six months after Brady’s death, and with children still attending PLHS, Campbell was asked to chair the school’s safe driving committee—an assignment that would bring together her most personal loss and her vocation. Campbell reflected, “I initially thought, ‘Oh no absolutely not, I could not do that.’ But then I thought, ‘Actually, I really should do that.’ Then it became not only a service, but a research project and a passion.”

Campbell drew upon her love for Brady and the Point Loma neighborhood to take the safe driving committee into new territory. She designed an entirely new curriculum based on education research and centered on a documentary film.

The research confirmed to Campbell that she should share the intensely personal story of her family’s grief and loss with every student at PLHS. Campbell explained, “The kids balk at videos that are just out there—somebody that they don’t know—and another car crash. I knew we had to do something that was much more personal for them.

“The core concepts in the design,” Campbell continued, “are grounded in what PLNU teaches: care for one’s community, and that when you lose responsibility to your community, you lose personal well-being. The students are taught in this curriculum that communities take care of one another. This is a completely different message from the existing safe driving curriculums offered by a number of state agencies.”

Campbell approached Dr. Alan Hueth, PLNU professor of communication, for video production expertise. Together, they applied for and received PLNU faculty research and special projects grants to fund this work and to pay PLNU film students to produce a documentary.

Hueth explained, “At first, it was Conni and I working together and reviewing film samples, and then we communicated the project to the students.”

The interdisciplinary project was a win for student filmmakers, for PLHS students and their families, and for PLNU’s immediate community.

In addition to the film, Campbell worked with PLNU education students to write lesson plans for classroom implementation. They designed and held an evening event with PLHS parents. Campbell also added research-quality evaluation in her work with the curriculum, in the hope that the safe driving program’s successes can be replicated elsewhere, with stories of grief and loss that are personal to each community.

One year later, the first cohort of PLHS students were asked what they remembered and whether they had acted on it in a moment of decision: whether to drink and drive or to be a passive passenger while a friend drove drunk or texted behind the wheel. Campbell reports that typical safe driving interventions report a 15 percent rate in behavior change, but the PLHS program has more than doubled that number.

Even as she has shared her grief with her community, every day Campbell continues to mourn Brady. She misses her beloved firstborn son and all that could have been his life. Campbell said, “People have asked me if I am angry with God and I say, ‘No, why would I be?’ I just don’t even conceptualize that question.” Her faith in God is undiminished because she refuses to agree with some who suggest that Brady’s death was somehow God’s plan. She refuses to see her tears for him as weak faith or a deficit of Christian hope. Campbell said, “In fact, my faith has never once wavered in this tragedy.” Instead, she clings ever more tightly to the God of all comfort.