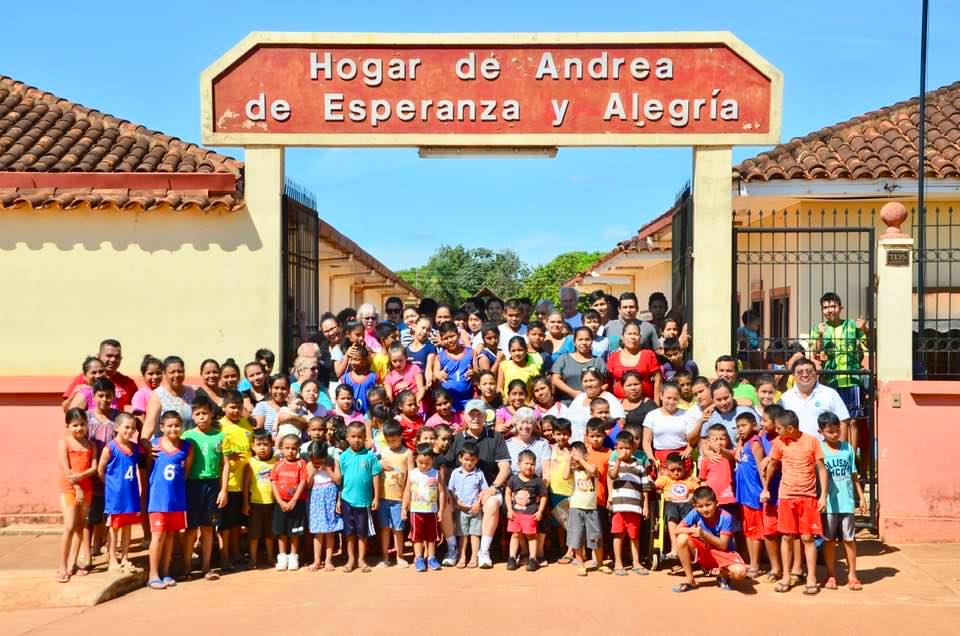 At Andrea’s Home of Hope & Joy, an orphanage in Bolivia, children and teens find a place where they can thrive and be loved.

Started by Gary (70) and Jerri (Stump) (66) Zimmerman through their nonprofit organization, Love in Action, Andrea’s Home was founded in 2008. Today, it consists of four houses and numerous projects, including a farm. It was named for the Zimmermans’ daughter, Andrea, who died from cancer in 2004.

Both Gary and Jerri felt the call to missions work at a young age. Jerri’s grandmother hosted missionaries for dinner after they spoke at church. At age 8, Jerri expressed an interest in following in their footsteps, and her grandmother encouraged her. Gary came to faith in his local Nazarene church at age 13. Although school was challenging for him, God provided a path for him to attend Pasadena College, which is where he met Jerri. Gary served as president of the Christian service organization on campus for three years and graduated after much perseverance with a degree in religious education. He went on to Nazarene Theological Seminary to prepare for missions work abroad. Jerri earned her B.A. in sociology along with a teaching credential. She taught in the California school districts of Temple City and South San Gabriel before they moved to Kansas City. By 1974, the Zimmermans had fulfilled all the requirements to serve as missionaries for the Church of the Nazarene and were appointed to Costa Rica.

“We loved living in Costa Rica and loved our work with all the gracious and wonderful people of Latin America,” they said. “We continue the friendships today with many of those we worked with during our years in Costa Rica.”

Along with their three young children, ages six, three, and two months, they served as missionaries at the Nazarene Theological Seminary (Seminario Nazareno Centroamericano) in the capital of San Jose from 1974 to 1976. Then, they were invited by the church to head up Work and Witness teams in Central America. Their position was to prepare construction projects and to set up lodging, travel, and food for the volunteer teams arriving from the States. From 1977 to 1979, they completed work projects in Costa Rica, Guatemala, and Nicaragua.

Upon returning to the States, the Zimmermans continued their calling to missions by establishing a ministry named Love in Action through their local church in California. Gary decided on the name, which he took from 1 John 3:18: “Let us not love in word or in tongue but in deed and in truth.” From 1986 to 1998, Love in Action organized and led short-term mission teams to work with organizations, including the construction arm of Wycliffe Bible Translators (Wycliffe Associates) in Peru and Guatemala; with Greater Europe Mission in France; and with New Missions in Haiti. In 1998, Love in Action International Ministries was registered as a 501c3 nonprofit organization.

Gary and Jerri always wanted their work to be an answer to someone’s prayer, and that is how their project in Bolivia took shape. Through several connections, including a missionary from the organization New Tribes, they helped answer prayers by constructing a church and helping with various projects. They had a heart to help children and wanted to build an orphanage or school.

Then in 2004, the unthinkable occurred. The Zimmermans’ beloved daughter Andrea Mischel (96) passed away from cancer at age 30. The New Tribes church had been praying faithfully for Andrea, and at the funeral, the pastor, Saul Peralta, reminded them of Romans 8:28: “And we know that in all things God works for the good of those who love him, who have been called according to his purpose.” He then gave them a property of 2.5 acres for their orphanage project, which was named Andrea’s Home of Hope & Joy.

“We train and raise the children up by mentoring them, giving them trade skills, helping them go to college and make wise choices for marriage. Our children are growing up, and we never tell them to leave at a certain age.”

“The ground-breaking took place in 2005, construction began in 2006, and the home opened on June 14, 2008, to receive the orphaned, abandoned, abused, and extremely poor children in Guayaramerín,” Gary said.

There are close to 100 children in the home, organized into houses of 20, each with “substitute parents who love these children like they are their own.”

“They call them mama and papa,” Jerri said. “They know they are blessed. They know where they came from and they know there are other children who need to come in.”

Since 2008, Andrea’s Home of Hope & Joy has grown to include a Christian school and businesses that help sustain it, including a café and bakery.

There are close to 100 children in the home, organized into houses of 20, each with “substitute parents who love these children like their very own.”

“We are now blessed with 230 acres, including a farm,” Gary said. “We train and raise the children up by mentoring them, giving them trade skills, helping them go to college and make wise choices for marriage. Our children are growing up, and we never tell them to leave at a certain age. We are planning an apartment for our aging out teens adjacent to the home.”

Thanks to God’s provision, Andrea’s Home has no debt. They are recognized by the Evangelical Council for Financial Accountability (ECFA). With the businesses, support of donors, and God’s providence, the Zimmermans’ goal is to create multiple homes.

“What I most enjoy is working with the national people,” Jerri said. “We know the language, having been missionaries in a Latin American country. We learned to love the national people in Costa Rica. We still have many friends there, and we are working with them to start a home there. I love the Latin American people and have a real bond with them. I love the people of Bolivia, and I love children from babies to teenagers.”

Gary enjoys using his skills to develop, expand, and fulfill the vision for Andrea’s Home. “I enjoy working with our Bolivian leadership. They are amazing. Rescuing kids – that’s the bottom line.”

“I always like to talk about our soccer and volleyball teams,” Gary added.

“Three years ago, our volleyball coach had a team of boys ages 9-12 all from our home. Our boys advanced from the local level to district to state to national. They became number two in the nation in volleyball. Imagine coming from a poor home to Andrea’s Home, and then getting to ride on an airplane. They got a giant trophy for silver. People saw how lives that have been rescued are on the right track all because of God and everybody else. People in the community and in the airport, they were so thankful that we have come to help their children.”

Andrea’s Home of Hope & Joy has been a light to so many people, and it has been a way for the Zimmermans to honor Andrea. Jerri also wrote a book sharing her story of loss both to help others and to raise money for Andrea’s Home. Mrs. Job – Journey Through a Mother’s Unspeakable Sorrow, was published by WestBow Press—A Division of Thomas Nelson and Zondervan. All proceeds from the book’s sale go directly to Andrea’s Home.

For now, the Zimmermans’ plan is to continue their calling as God gives them good health and strength or until he calls them home. They are also praying for a younger couple to come alongside them. They are the proud parents of Darin Zimmerman, Ph.D., professor of physics and dean of math and sciences at The Citadel, Charleston, South Carolina; Annette (Zimmerman) Stone (94), an elementary school teacher for more than 20 years in Colorado; Andrea (Zimmerman) Mischel (96); eight grandchildren; and two great-grandchildren.

You can learn more about Andrea’s Home of Hope & Joy at www.liaim.com