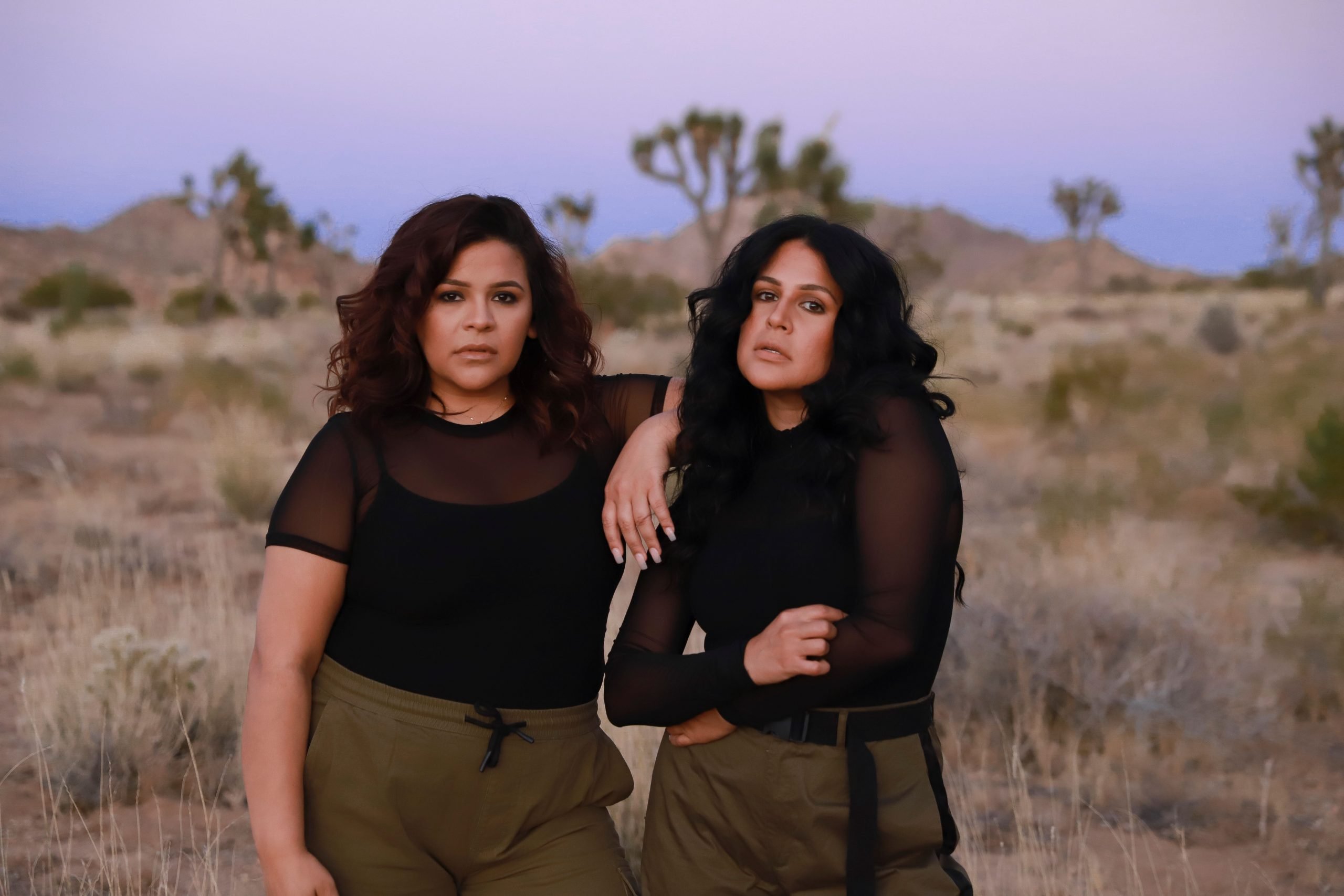 For sister singer-songwriter duo Genessis & Nikki, worship music is not just something that flows through their powerful vocal chords, but also through the story of their lives.

“Genessis came out of the womb singing,” said Nikki Holguin (14), 29, of her older sister, Genessis Holguin, 32. Born and raised in East LA, they grew up surrounded by a musical family, attending what they describe as a small, very diverse Pentecostal church where the worship music was infused with the sounds of Cumbia and Merengue.

As young singers and music lovers, they, at first, weren’t allowed to listen to secular music other than jazz. So they listened to a lot of jazz.

Ask them today and they’ll tell you that, as performers, they’re inspired by “all the genres,” with Nikki offering this list to sum them up: “Latin, pop, soul, funk, R&B, and gospel …  with salsa.”

Though they later discovered artists like Michael Jackson and John Legend, the coritos [short songs] and hymns of their childhood have always stuck with them. And it was really as a student at Point Loma Nazarene University that Nikki says her eyes were opened to how worship music could reach people with backgrounds different from her own.

“I would see people in the front barefoot or in flip flops at chapel, just seeing a completely different culture of worship,” Nikki said.

After graduating in 2014 with a Bachelor of Arts in broadcast journalism, Nikki launched full-speed ahead into seeking a career in TV news, interning at ABC Channel 7 in Los Angeles.

But it wasn’t quite right.

“I was so depressed,” Nikki said. “I would come home and be like, ‘This is the heaviest job.’ As a creative, I was just, I was so sad all the time.”

Meanwhile, Genessis was diving into the pursuit of a legal career. Having graduated from Azusa Pacific University with a degree in political science, she was finishing up an externship for a Superior Court judge in Los Angeles and was working toward going to law school. During college and after their graduations, the sisters found time to sing on the side, whether together or alone.

“Those careers were actually just preparing and really cultivating even our callings in different ways, because I feel like music is what we love to do. And it’s the vessel that gets us there, but people, and really pursuing God’s presence and pointing people back to Jesus is where we land.”

Nikki is the creative, free spirit of the duo. “She needs to color outside of the box,” Genessis said. “I’m the complete opposite. Type A. Lists. So the law profession was just everything that I like … I was absolutely, really excited.”

While Nikki was itching to find more of an outlet, Genessis was ready to put music on the back burner after racing to session work or background vocal opportunities around LA after long hours at her externship.

An important key to understanding Genessis and Nikki is that they are very proud to be empowered, outspoken, Mexican American women and see advocating for and nurturing the next generation of women as a must. So it’s fitting that when a power woman who paved her own way, Judge Teresa Sanchez-Gordon, encouraged Genessis to pursue music full time — saying “law school is always going to be there” — she decided to listen.

“[Nikki] was trying to figure out her direction. And we’d been praying about it. And I just felt like that was the godsend for us to really do more music, more worship,” Genessis said.

They were proud of their degrees and their work ethics, but they couldn’t deny that the further they got into their careers, the more their opportunities in music were expanding.

“I kind of feel like those careers were actually just preparing and really cultivating even our callings in different ways,” Nikki said. “Because I feel like music is what we love to do. And it’s the vessel that gets us there, but people, and really pursuing God’s presence and pointing people back to Jesus is where we land.”

The sisters’ journey making music as Genessis & Nikki has included some high highs. In 2017, they recorded and released the singles “Holy Spirit” and “Dame Más.” In 2018, they released a full album, “Genessis & Nikki,” and were nominated for a Dove Award.

The journey has also contained some low lows, like in 2019, when they walked away from a management team that told them “you’re not gonna make it” without their help.

All the while, they served as worship leaders for a number of churches, including Saddleback Church in Orange County, their home church, something they still proudly do to this day. But they missed their creative outlet as sisters.

“I had, like, stopped believing,” Genessis said. “I was like, I feel like we gave it our all, and God was so sweet. And he was like, test me … tell me what you’re frustrated with … I can handle your questions.”

They waited and listened and prayed for the answers. As they tried to regroup in 2020, the coronavirus pandemic hit the music business hard. Everything from touring to music sales took a turn for the worst.

It created the perfect environment, however, for the sisters to put their heads and hearts together, with less distraction and no team to tell them how to do what they do best: worship. It led to what they describe as a “major recalibration spiritually, emotionally and mentally,” with the release of their latest single, “I Am.”

“We released ‘I Am’ because we needed to release it in our spirit,” Nikki said. “It wasn’t even for anybody else, we said. Even if it was for 10 people .. that would be enough because this is the song of our heart.“

The song was released on Nov. 13 — with lyrics in English and Spanish — and the feedback was overwhelming. “I Am” was selected for Spotify’s “Top Christian” playlist and is on its way, as of this writing, to a half a million streams.

“God has been so gracious to show us that it’s not about us, it’s never about us and what we can do, and He’s gotten the glory.”

“It’s a confirmation that we are where we’re supposed to be, even though the last thing we heard was, you’re going to fail,” Genessis said.

“You kind of have to take a step and be like, I don’t care what this looks like, I’m going to step out in faith, and I’m also going to be this woman who shows, not just other women, but young girls, ‘Hey. There’s no expiration date on your calling,’” Nikki said.

They said they’ve received messages from people all over sharing how the song has encouraged them or helped them through their hardest moments.

“God has been so gracious to show us that it’s not about us,” Genessis said. “It’s never about us and what we can do, and He’s gotten the glory.”

Genessis and Nikki plan to release two new singles by April. Their goal is to continue writing and singing music that is authentic to who they are — even if that means sharing that they’re still figuring out what that looks like. They want their music to be honest and authentic.

“If God has his hand on it, literally, there’s nothing that you can do or that anyone can do to disrupt that,” Genessis said. “And Nikki and I are super passionate about telling young people, but young women especially, that, hey, if God’s in it, you’re fine; you’re going to be fine.”