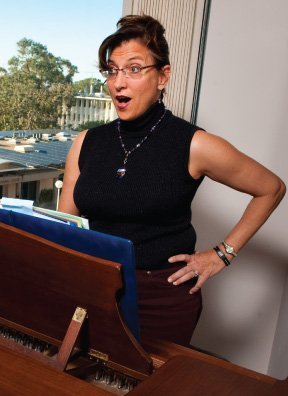 Juliette Singler, D.M.A., associate professor of music, has a gift for song. “Her voice is gorgeous,” said Cristina Pacheco (07), PLNU alum and choir conductor for First Church of the Nazarene. Yet, as talented a vocalist as Singler is, she shines most when she’s not on stage.

Singler was Pacheco’s vocal instructor for four years. This investment in Pacheco left a lasting mark. “She genuinely wants to see others succeed,” said Pacheco.

“Juliette was able to find what I was passionate about and then help me develop,” said Moore.

After graduating, Moore spent a short time as the music minister at Apple Valley Church of the Nazarene. He now performs with Between Your Ears Entertainment, a multi-media production company that uses the arts to help educate young children around the world. Moore credits Singler for his early career success.

“She’s always looking out for possibilities for her students,” said Moore. “She still sends me e-mails with opportunities.”

This is Singler’s ninth year teaching voice at PLNU, a role she considers a calling. Singler taught in the Los Angeles area before coming to San Diego. One college in L.A. offered her a full-time position, a chance that aspiring university professors rarely turn down. She felt like God wanted her somewhere else, so she declined the job. Only after that step of faith did the opportunity at PLNU develop. She couldn’t be happier.

Singler emphasizes that the delight of PLNU’s music department is its highly collaborative atmosphere: “Everything we do here in music is a team effort.”

She credits her voice colleagues and accompanist Ines Irawati for enabling PLNU’s voice program to thrive. And thrive it has.

In 2008, Singler directed a student production of Mozart’s opera The Magic Flute. The performance won high acclaim, including third place in its division for the National Opera Association competition.

Moreover, the experience was the catalyst that led to the establishment of the opera club, now Point Loma Opera Theatre. Under the instruction of Singler and voice professor Craig Johnson, D.M.A., PLNU students have excelled. For several years, PLNU students have taken top honors in the San Diego District of the Metropolitan Opera National Council Auditions, a prestigious nationwide competition that identifies up-and-coming opera talent.

Singler has been supportive of her colleagues, as well as her students. She was the president of the San Diego chapter of the National Association of Teachers of Singing from 2003-05, during which she presided over a 30 percent membership increase and launched the chapter’s website. She continues to serve as vice president.

“It says a lot about the respect and trust her colleagues have for her that they would elect Juliette to this committee,” said professor of music Keith Pederson, D.M.A.

Singler has earned a positive reputation by years of excellent service. In fact, she has gone so far as to literally put her money where her mouth is. Singler attended the University of Louisville as an undergraduate student. Unfortunately, there were very few opportunities to learn performing opera there. Even in large metropolitan regions that are home to professional opera companies, the costs of producing an opera can exceed ticket sales by 100 percent or more.

That’s what prompted Singler to get creative as a philanthropist and designate a planned gift to her alma mater through an insurance policy.

“I always wanted to be a philanthropist and do something really wonderful for God’s work in the arts but knew that money would be tight if I pursued a career in the arts. This seemed to be a great solution,” said Singler.

Now Singler has been contributing to a flourishing arts program at PLNU for nearly a decade. Through her instruction, generosity, and advocacy, she is giving her students a voice in the arts and culture.