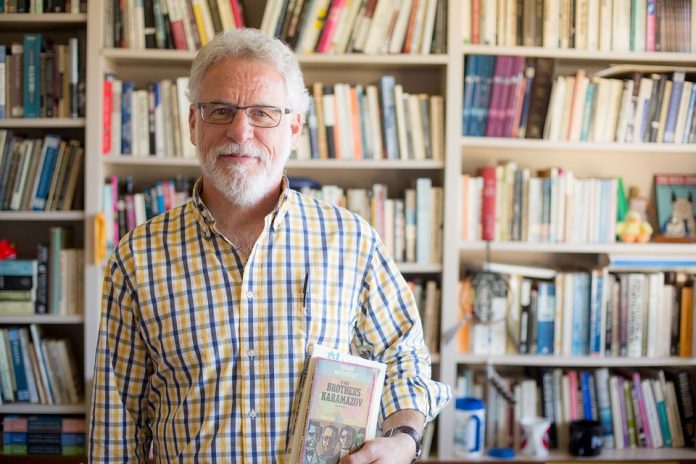 In countless Bible studies and Sunday school classes at my home church, I had learned the fundamental aspects of reading the Bible. I asked the basic questions I had been taught to ask: Who wrote the text? To whom was it written? What occasion led the writer to write the text? What might the text have meant to the original audience? And, very importantly, what might the text mean to me and the community with whom I read it? All of these questions took on much greater depth and complexity with the demands of the college Bible and theology classroom. Under the guidance of wonderful professors such as Cliff Fisher, Frank Carver, and Reuben Welch, I learned just how rich the biblical text became when I asked those basic questions of interpretive reading in a community led by a trained theologian or biblical scholar. Meanwhile, in the courses in my literature major, I learned that the questions I had been taught in Bible studies and Sunday school were truly questions of literary study and interpretation. Reading the Bible as I was being taught to read other texts did not lessen the significance of the inspired biblical text, but it did make me a more self-critical reader. I became more aware of myself as a reader and more aware of the commitments of the interpretive community into which I was being initiated. It was a community with a deep commitment to exploring the biblical text and allowing the insights of the biblical writers to penetrate our lives. The witness of these writers to the living Christ deepened my discipleship to my Lord and Savior.

But even more was happening. The expectations I brought to reading the biblical texts began to change the way I read literature. This might take a little more time to explain because the change took two forms. I began to develop theological convictions about how God, in Christ, through the Holy Spirit, was working in the world, and this changed the expectations I brought to reading all texts. In addition, identifying with the characters in fictional accounts the way I had learned to identify with the historical figures I encountered in scripture deepened my empathy for the characters in literature and, eventually, deepened my empathy for the people I encountered in my life outside of the reading I was doing.

Although it would take me awhile before I could identify the perspective I was learning as a Wesleyan one, I was certainly becoming convinced that God was at work in the world, calling all of God’s creation back to God through Christ, convinced that this world truly is our Father’s world. Through the symbiotic relationship of worshiping and learning in the same community, I began to be transformed into a disciple who truly expected God to change me and those with whom I worshipped into the image of his Son, our Savior. Along with Charles Wesley, I became convinced that “Jesus, Thou art all compassion; pure, unbounded love Thou art.” My prayer became Wesley’s prayer: “Breathe, oh breathe Thy loving Spirit into every troubled breast!” God’s purposes became clearer to me. They are beautifully expressed in the final verse of the hymn quoted above, “Love Divine, All Loves Excelling”:

Finish then Thy new creation;
Pure and spotless, let us be.
Let us see Thy great salvation,
Perfectly restored in Thee:
Changed from glory into glory,
Till in heav’n we take our place.
Till we cast our crowns before Thee,
Lost in wonder, love, and praise.

No one taught me to separate my intellectual life from this life of transforming love, so I didn’t. And all around me I witnessed mature Christian professors and staff members who lived a unified life of deep intellectual work and great love for God and neighbor. I wanted to emulate them.

Linked to this conviction that God was at work in all people was the growing conviction that God would use any means possible to reach people. Thus literary study, along with all the other academic disciplines, became a means for God to reach me and others. Because my studies were primarily in the humanities, I am best qualified to speak of how God used the arts, especially the literary arts, to draw me closer to God through Christ.

One way God uses the arts is the gift of creativity itself. The Bible is filled with stories, and Jesus told some of the best-crafted stories I’ve ever encountered in the parables He shared with His disciples. I began to see this same impulse to storytelling as a basic human cultural trait. Whatever it means that human beings are made in the image of God must surely involve our penchant to craft the gift of language into stories about ourselves and others. But literature displays not only our storytelling tendencies, but also speaks to human endurance and even, at times, human triumph over great adversity. We tell stories, over and over again, of the human condition in this world of God’s own making. Tragic narratives point to the wages of sin. Comic narratives point out the foibles of human pride. And ironic ones remind us that things are often not what they seem.

Of particular importance to me was my study of the prophets of the Old Testament. In a course with Frank Carver on Old Testament theology and another with Reuben Welch on the role of prophets in the Old Testament, I was exposed to a group of writers who proclaimed two fundamental truths: 1) that human beings often shied away from speaking the truth about the nature, extent, and causes of human suffering, and 2) that God was more than capable and anxious to do new, redeeming work in God’s world and through God’s people. When the prophet Nathan confronted David with a story, when the prophet Jeremiah warned the people about their political allegiances and tried to prepare them for what would be required of them in captivity, and when the prophet known as Second Isaiah wrote the amazing book of poetry we know as Isaiah chapters 40-55, they were announcing the reality of human suffering and — much more importantly — announcing that God was about to do a new thing. What if, I began to wonder, artists participated in some aspect of this same prophetic task? What if we saw the artists among us as those most willing to shine a light on human suffering and pain and sorrow? By so doing, they were also, whether they knew it or not, pointing out the need for the marvelous work of God in Christ.

Through the fictional characters I learned of through the works put into my hands by Noel Riley Fitch, Mike McKinney, Art Seamans, and others, I learned much more about the suffering and pain of the world and the triumph of the human spirit than I could have learned through a hundred lifetimes without reading. Reading about Joe Christmas, Alyosha Karamazov, Jay Gatsby, and countless others profoundly deepened my sense of what it means to be a human being. And the reading of fiction was only part of the work of God in my life through the arts. What I found in literature I found in music and the visual arts as well. The tools I developed to read literature, I found, could be used to read other aspects of the culture around me — the culture of the American past Dwayne Little and Ron Kirkemo introduced me to and the culture of the American present in which I lived.

I didn’t know it as an undergraduate, but the education I was receiving at PLNU was preparing me in amazing ways for the reading experience that has been one of the great joys and challenges of my life — reading the fiction and essays of the American Catholic writer Flannery O’Connor. Like many readers, I was baffled when I first encountered O’Connor’s funny, violent, and profoundly spiritual stories. What was I to do with this odd menagerie of characters, including a one-armed handyman; a young woman with a Ph.D. in philosophy and a wooden leg; a World War II vet who returns from the war and tries to start his Church Without Christ; the Polish refugee family trying to make their living on a farm in the American South; the teenager obsessed with baptizing his mentally challenged cousin; and of course, Mrs. Turpin, who was haunted by the young woman who calls her a warthog from Hell. And all of these characters were created by a woman who announced she wrote from the perspective of Christian orthodoxy and who deeply believed that God’s grace could encounter us in the most surprising ways in the most unexpected places. With the best of artists, she regularly confronted her audience, whom she was convinced was nearly deaf and blind to the reality of human suffering with the awful truth about the pain so many people endure; she once famously wrote that, “to the hard of hearing you shout, and for the almost-blind you draw large and startling figures.”

O’Connor was deeply committed to the protection and presentation of mystery. She believed the world was infused with the presence and activity of God and tried to write stories demonstrating this mystery. Her work continues to strike me as wonderfully prophetic in the very best sense of the word, the sense I learned in the classroom with Frank Carver and Reuben Welch. The world is essentially mysterious because God is about God’s own work, and we only see that work through a glass darkly. Perhaps it is the work of the artist, of the storyteller, to wipe away a few of the smudges from that glass and allow us to see more clearly, if only for a moment or an hour, the wonder and mystery of what it means to be a human being. O’Connor once wrote that, “it requires considerable courage at any time, in any country, not to turn away from the storyteller.” I’m glad I was taught not to turn away from them, but to turn toward them. They have greatly enriched my life.

A graduating senior once introduced me to her parents at a reception near the end of her undergraduate years by saying, “This is Dr. Martin. He taught me how to read.” I treasure that remark and consider it one of the greatest compliments I have ever received. But all I was really doing, all I’ve ever tried to do in my teaching, has been to follow the advice Timothy recorded in the second epistle to bear His name — to take what was entrusted to me and pass it on to faithful women and men who will carry the Good News forward to the next generation. I was taught to read by faithful men and women, and it has greatly enriched my life. I pray I have been and will continue to be faithful to the next generation.

Karl Martin graduated from PLNU with a degree in literature in 1981. After completing a Ph.D. from the University of Minnesota and teaching elsewhere for 10 years, he returned to PLNU in 1998. He currently serves as chair of the Department of Literature, Journalism & Modern Languages.

The ABCs of Developing Successful Readers

My Journey Through the History of Mathematics