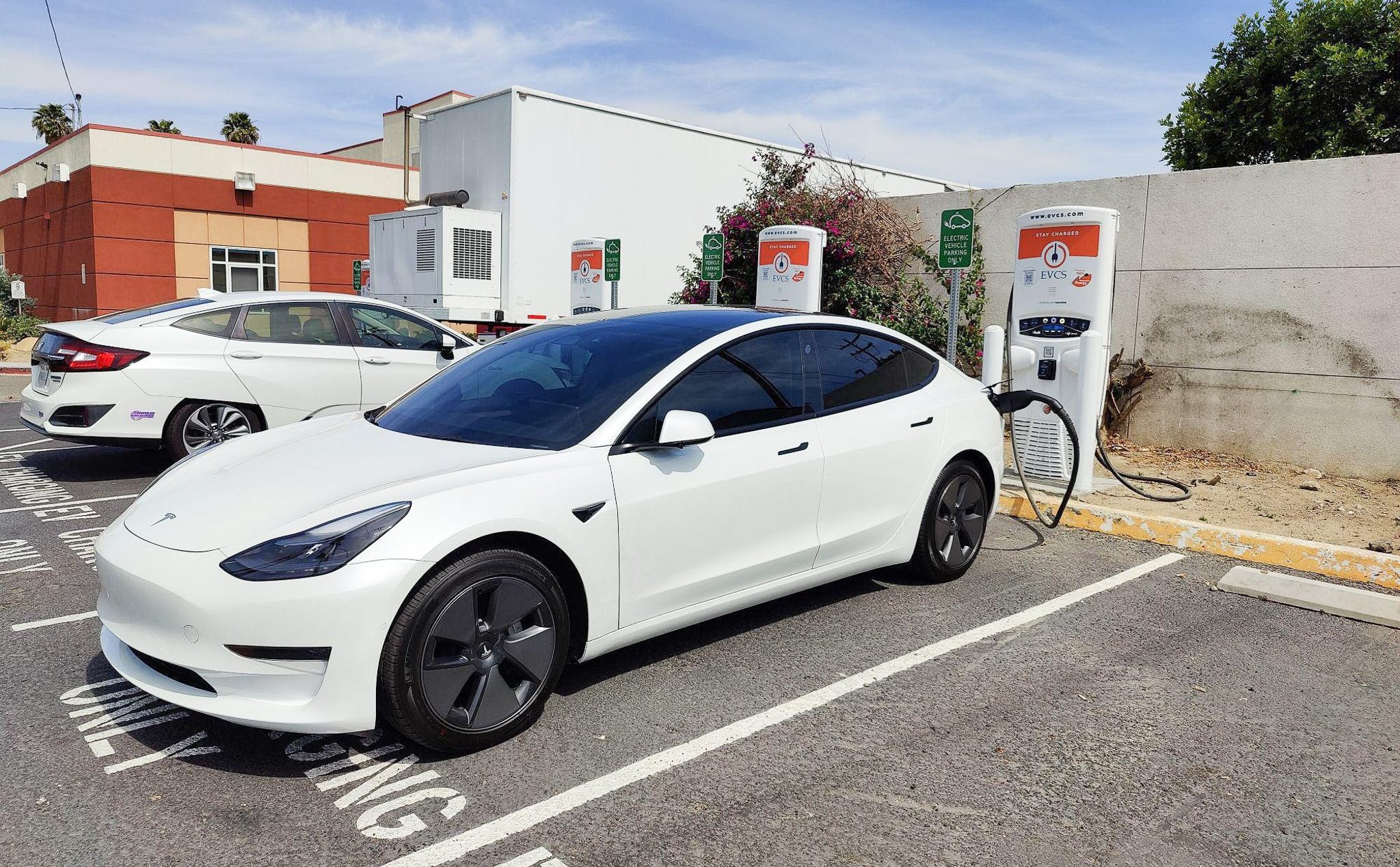 Innovation, timing, and a passion for building businesses have catapulted Gustavo Occhiuzzo as a leader in the electric vehicle (EV) transportation industry. Beginning in 2014, Occhiuzzo’s companies have worked in tandem to quickly become carbon neutral and are moving toward becoming carbon negative in 2023.

“It’s fascinating how everything links together,” he said.

“There’s a way that you can actually capture gasses and use those gasses to generate electricity,” Occhiuzzo said. “And when you do that, now your carbon footprint is negative.”

Occhiuzzo emigrated from Argentina, where he was a junior national champion in the decathlon. He was accepted to several American universities, but none offered him the full scholarship in athletics he needed to attend.

“But all of a sudden there was a university that wanted me, and they wanted me the next month,” he said.

And in January 1994, 20-year-old Occhiuzzo came to PLNU to pursue his talents in athletics and study physical education. While competing as a decathlete for PLNU, he became the national district champion in the decathlon for Southern California and ranked third nationwide in the javelin throw. He qualified for nationals, but three weeks later he was injured and made the decision to stop pursuing track and field. He also realized physical education wasn’t his interest.

“I really realized what I love to do is build businesses,” he said. “That was a pivotal semester in my life where I decided to change course.”

After the end of the semester and his full-ride scholarship, Occhiuzzo would return to Argentina. But he remembers PLNU fondly as a supportive and encouraging community that helped him discover that change.

“It was a great experience,” he recalled. “It was a short period, but at that age, you’re a sponge and you’re so receptive to different things.”

Occhiuzzo’s exposure to business began when he was a child, watching his parents operate a perfume store. He remembers realizing his parents were able to hire enough staff to manage the store so they could be able to spend time together as a family.

“That really got me thinking that if you have employees that can take care of your business, you can free up your time,” he said.

Occhiuzzo applied this business model at 8 years old by mowing lawns, hiring friends to mow the lawns as his clientele grew, and giving them part of the proceeds.

Occhiuzzo also learned at an early age that businesses can care for the environment. At 18, he bought his first business in Buenos Aires, a taxi service with retrofitted vehicles to use compressed natural gas instead of diesel. It was more economical and less polluting.

“If you’re building a business that will generate profit, you might as well do something that is good for the environment,” he said.

The taxi service used a business model similar to Uber, though Occhiuzzo doesn’t take credit for it because the system was so common in Argentina. In place of cell phones, however, customers would call the main office to schedule a pick-up, and drivers would be notified using radios installed in the vehicles.

Three years after returning to Argentina following his semester at PLNU, Occhiuzzo returned once more to California to pursue his passion for building businesses. In 2009 he invested in rental properties outside of Los Angeles, where, driving through the area, he began to notice parking lots would fill up during the week but remain empty on weekends. He realized residents were driving to the parking lots to vanpool, removing vehicles from the freeway, making it much cheaper for the user in the process.

“That opened my eyes,” Occhiuzzo said. “I said, ‘one day I will go back to my roots in transportation and try to do something with vanpools.’”

So in 2014, after running a landscaping business for 14 years, he decided to get back into transportation.

“I really wanted to put my talents to work to something that actually makes an impact on the environment and the economics of other people,” he said.

“I really wanted to put my talents to work to something that actually makes an impact on the environment and the economics of other people.”

Using federal and state subsidies, Occhiuzzo founded the vanpool service Green Commuter with the vision of using only electric vehicles to become the first zero-emission commuter service in the U.S.

To receive subsidies, the vanpools needed to be categorized as public transportation, which required at least seven seats per vehicle. By 2016, the company was using the newly released seven-passenger electric Tesla Model X with a fully integrated app. Due to the subsidies offered by transit agencies and other sources, half of the vanpool users end up paying nothing, which inspired Occhiuzzo to continue working to develop a service completely free for all users.

When the COVID-19 pandemic hit in 2020, however, the business found itself at serious risk.

In response, Occhiuzzo and his team quickly pivoted, developing vanpools focused on federal employees in the military and U.S. Border Patrol traveling from the Riverside area to the U.S.-Mexico border. Using subsidies from the federal government and COVID-relief funding, they were able to grow the business while allowing the federal employees to ride for free.

“Because we focused on that demographic and that type of customer that was not affected by COVID, we were able to keep growing the company,” Occhiuzzo said.

Since then, Green Commuter has remained successful, doubling the number of operating vehicles. However, the team realized the vehicles were only being used for the daily commute in the mornings and evenings. Taking from his 24-hour taxi service business in Argentina, Occhiuzzo wanted to make the most of the vehicles. So he implemented a car-share service offering users electric vehicles to rent on a one-hour basis when the vanpools weren’t operational, making Green Commuter the first company to offer a subscription program, providing unlimited access to charging stations in California, Oregon, and Washington.

As the company continued to grow, Occhiuzzo realized, despite the market for vanpools, there weren’t enough charging stations to meet the demand. This led to a new opportunity and the creation of his second company, Electric Vehicle Charging Solutions (EVCS), in 2018. This coincided with a pivotal year in the EV industry as growing numbers of rebate programs were being offered to install EV charging stations, including $6 million in rebates for Occhiuzzo and EVCS to build charging station sites.

“At that moment, we were very well positioned to take advantage of massive amounts of money made available,” Occhiuzzo said.

The company has since installed 700 electric charging stations throughout California, Oregon, and Washington, typically at shopping centers and universities, with 1,500 more charging stations under construction by early 2023.

Occhiuzzo attributes part of his success to timing, but this time the advantage was being late to the game.

“We were able to really learn from what worked and what didn’t work and create a business plan and business model that is unique,” he said.

In 2020, Occhiuzzo also began using solar farms to source electricity that provides additional carbon credits, which has led to funding nearly the total cost of electricity of his company.

Occhiuzzo believes within the next decade every state will have a carbon credit program.

Continuing his quest to provide beneficial services to the public while decreasing pollution, Occhiuzzo founded Koe Energy (Koe is “cow” in Dutch, named after the large population of Dutch dairy farmers in California). Not only will it be at no cost to dairy farmers, but it will adapt to increasing methane emission regulation. The impact of Koe Energy will also complete Occhiuzzo’s vision of creating a carbon-negative electric vehicle transportation system by using methane collected from the manure of dairy cows to fuel the electricity needed for the charging stations. The process includes a football-field-sized area of cow manure that’s twenty feet deep and covered with a tarp to collect the methane.

As the EV industry continues to grow it’s unknown how long federal and state subsidies will be offered. Occhiuzzo believes opportunities will continue to grow for at least two to four decades. He points out that historically the U.S. government has subsidized transportation as it has with fossil fuels.

“We think that we have a long runway in terms of the transition,” he said. “It’s the tip of the iceberg.”

As California leads the electrification of the transportation industry, Occhiuzzo believes other states will continue to follow and provide endless opportunities.

“Maybe once we’re done building California, we start building somewhere else,” he said.

Occhiuzzo knew at an early age he wanted to build businesses, but beyond that, he didn’t know where his career would lead. Today, he has the same attitude, and his willingness to accept new challenges in business has continued to lead to his success. Occhiuzzo’s made a significant impact in the EV transportation industry, and if a new opportunity arises he’s always open to changing course.