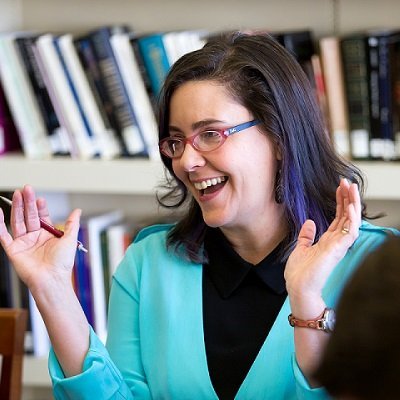 When you sit in a classroom during a discussion led by Heather Ross, associate professor of philosophy, you’ll most likely sit in a circle, surrounded by peers and Ross herself.

Ross intentionally chooses a circle of chairs for learning so every participant is both teacher and learner. Accountability is formed, trust is earned, and respect is fostered, she explained. Because of the deep nature of the subject of philosophy, she added, a strong sense of community is not just helpful but necessary.

“It’s important to me for all of us to be sitting in the same plane, for all of us to be horizontally related to one another,” Ross explained. “The way that the classroom is set up is extraordinarily important for the educational process to be effective. When we have the opportunity to arrange the desks in a circle, it cultivates the atmosphere of education that we’re all looking for.”

“I want to cultivate a pedagogy that supports a vision of education as transformational, opening up learners so they can be disposed toward the other, particularly in matters of justice,” said Ross. “I want my students to awaken to the possibility of enacting justice in the world, and that requires a certain vigilance, wakefulness, and consciousness. That, to me, is philosophy at its best, when it’s making us aware of the questions at the heart of human existence. Philosophy also removes the illusion that we can exhaustively understand and master the human being.”

Ross first experienced the transformative nature of philosophy when she attended Trevecca Nazarene University. She initially studied literature but almost immediately changed her direction toward philosophy after taking an influential general education course on the subject.

“The first time I heard a lecture on Socrates’ apology, I still remember where I was sitting in the room,” recalled Ross. “I remember the feeling in my heart, the passion that was enlivened in me when I realized that education can look like this—that we can talk about these questions. I will never forget that.”

Ross’ current research is focused around the process of education within the study of philosophy, from an ethical perspective.

“What matters is to be disposed toward another human being as though he or she is not to be mastered, consumed, or fully grasped, but is instead a being who is to be loved,” Ross explained. “How can we come to understand education or the study of philosophy as an ethical enterprise? Every single time I’m engaged in scholarship, that’s the question I’m asking.”

Teaching philosophy at a Christian Nazarene liberal arts college has been an ideal environment for Ross, as she grew up in the Nazarene church. Though philosophy as a discourse encourages the questioning of beliefs and ideas, Ross never experienced a dissonance between her love of the subject and her faith. In fact, the opposite occurred.

Ross’ involvement with the church continued to grow as she pursued her career. Currently, her husband is a pastor at the Normal Heights United Methodist Church, where Ross also serves in her free time. Beyond the congregation, she has also been heavily involved with the Wesleyan Philosophical Society, serving as president, program chair, and in multiple other roles.

She is also a part of the National Women’s Studies Association, and in 2015, she traveled to Puerto Rico with fellow PLNU colleagues connected with the Margaret Stevenson Center for Women’s Studies. There, she gave a presentation on the relationship between feminist discourse and Christianity.

While Ross serves in many different areas, her passion for teaching and her students supersedes all.

“The most important aspect of what I do is Christian discipleship,” she said. “The project I care the most about is cultivating in my students a love for God and neighbor. That is my great hope—and it’s a supreme act of hope and faith that our students will go out into the world truly loving God and truly loving their neighbors.”