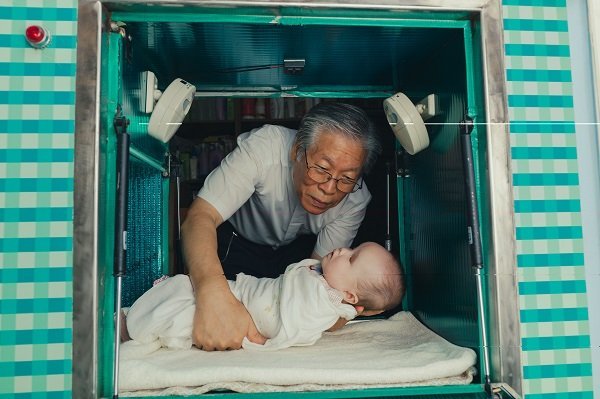 For four months AJ Wolf (14) and Tavis Robertson (14) and Wolf’s father, Eric, set out on a journey to change the lives of abandoned children in Jusarang, Seoul, South Korea. Their campaign, Hike for a Home, was a journey of faith along the Appalachian Trail, a nearly 2,200-mile hike stretching from Maine to Georgia. During their adventure, the three raised more than $8,000 toward the construction of a rescue center for South Korean babies, a project being developed by Pastor Lee Jong-rak.

In 2009, Pastor Jong-rak responded to infant abandonment in Seoul by building an incubated “baby box” on the side of his home, which also served as his church. The box is a padded, heated compartment made to be comfortable for an infant, with a door on the outside and another inside; it enables unwed mothers to safely and discreetly surrender children who would otherwise be left out to die.

Since its inception, more than 500 infants have been delivered anonymously through the box. Pastor Lee has found homes for every abandoned child. The work of his church has become the subject of the acclaimed documentary The Drop Box, created by filmmaker Brian Ivie and his film crew, including Robertson, and the inspiration behind the Los Angeles-based nonprofit Kindred Image, whose mission is to support Pastor Lee’s work.

Wolf, his father, and Robertson paired with Kindred Image on a fundraising campaign to help Pastor Lee achieve his dream of constructing a rescue center to serve children and mothers at risk in his community. In 2012, Eric Wolf was diagnosed with multiple myeloma, an incurable bone cancer, and upon learning Pastor Lee’s story, he, his son AJ, and Robertson sought to uplift, inspire, and help others whose futures were also uncertain.

Here are some excerpts from the journal AJ kept during the adventure:

For most “thru-hikers,” the Appalachian Trail begins at Springer Mountain in Georgia, then winds its way north to Mount Katahdin in Maine. Because of our June start date, we made the journey southbound to avoid harsh weather conditions. Our first day, we hiked a short but grueling 5.5 miles to the sign atop the summit, “KATAHDIN.” We saw etched into the worn wood that our destination was over 2,000 miles away. Not knowing what to expect of the long journey ahead, we held onto our cause firmly. As we started our descent, thoughts of Pastor Lee came to mind. When he built the baby box, he wasn’t sure if any babies would come. But they came.

Day 25. Maine finally fell behind us and New Hampshire lay ahead. We were exhausted, physically and emotionally. On one occasion my father was nearly reduced to tears. Exasperated, he wished that it were easier for him and that his body would catch up with the strength of his heart. I imagined the overwhelming feeling we had was something similar to what Pastor Lee and his team felt as more and more abandoned babies began filling up their church and homes, pointing to the bigger problem of child abandonment in Jusarang. But Pastor Lee didn’t stop there. He kept working toward a long-term solution, and still is.

Wearily, we came to Gentian Pond Shelter in New Hampshire, one of the most beautiful points we encountered along the trail. We soaked in the warm afternoon, the peaceful mountains, and for the first time in a long while, we could breathe deeply. Just like so many nights on the trail, other hikers shared our shelter with us. Many were extremely hospitable, including a hiker named “Head Over Heels” (because he fell off a cliff!) We sat and shared stories and talked about our cause with everyone we came across, many of whom made on-the-spot donations to our fundraising campaign.

Around day 50, we came to a cabin shelter on a lake in Vermont. We had come so far, and the hardest days were over. I experienced a deep sense of appreciation for my father and Tavis, for my fellow thru-hikers, and for the largely unseen community of volunteers who maintained the trail. (Some of these volunteers chose to make pancake breakfasts for hikers who visited the cabin!) Whether sharing a long trail with friends, or sharing hope with a broken world, life is not meant to be a one-person show.

Day 65. We were finally getting our “trail legs.” We had been tested through bitter rain and sweltering heat, over high mountain passes, down steep cliffs and through rocky gaps. We had fought with mosquitoes and hunger and the cold, and now we walked through farm fields and cow pastures on private lands through which the trail wound. The flatter land was easier on us and our momentum seemed to increase, while the open sky mirrored our spirits—clear-headed, happy, and hopeful.

Day 99. On an autumn evening in Virginia, we stopped to watch the sunset. As fall crept in, it seemed to mark a turning point in our trip. Our hike was entering its final chapter. We ate, slept, and breathed the cause. Each day, I watched the colors change slowly, from green, to gold, to yellow, and even to deep purple. Significant changes take time—they can be hard to spot or painfully slow—but when we give witness to change, we see its beauty.

Removed from society and all its comforts, the trail brought us closer. With time to kill, our conversation topics slid from interesting discussions of current events into the most absurd (and entertaining) hypotheticals. Yet even still, I wondered if our remaining days would be filled with the deflation and bitterness so many hikers seemed to experience along the way. Instead, peace and gratitude floated above us, our cause burned in our chests, pressing us forward, and our anticipation grew with each passing day.

Day 110. McAfee’s Knob in Southern Virginia stretched out over a world of undulating forest. God’s providence sat tangibly with us that day. We looked out over the landscape and could see miles and miles of what now lay behind us. After over 1,500 miles, we were hiking like well-calibrated machines; 20-25 miles per day became routine and brought new strength as we raced ahead.

Day 143. On our last day, we laughed and reminisced as we closed the distance to our journey’s end. We walked in a kind of holy silence up the final mile to the summit of Springer Mountain. Finally, we had made it. The day was cloudy and bitingly cold, but as we reached the top of the summit, the clouds parted for a few minutes and the skies shone blue as though God was willing us to rest in the glow of our victory. God had carried us the whole way.

The beautiful thing about finishing a 2,185.3-mile trek is that you’re never finished walking. You get in your car and go home, and you keep walking. Pastor Lee will not live to see a day when children no longer need to be saved and mothers no longer need to be loved. Once the funds are raised for the rescue center, his work—our work—will not be finished. There will always be more mountains and there will always be one more adventure. The invitation to live is our gift from God, who pushes us into a life with meaning. My journey was filled with appreciation for so many significant lives, appreciation for the community I relied on along the way, and for the meaning that is born when people struggle together—and love together. We are never done loving. And we’re not finished walking.

Learn more about the documentary film, The Drop Box.