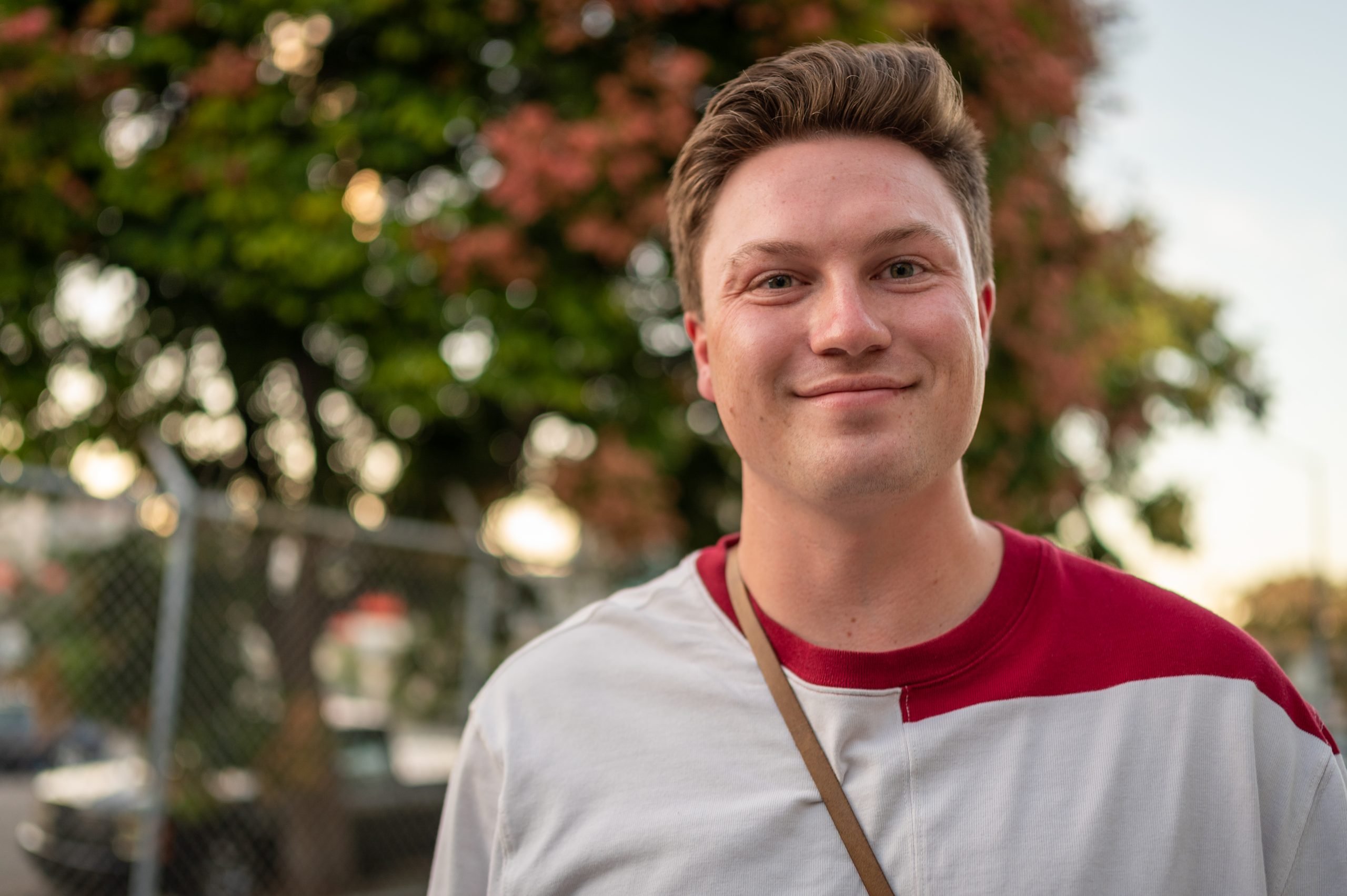 Hunter Scheidt (22), filmmaker, photographer, and videographer, does what any great artist does: he pays attention to the world around him and uses his craft to reflect whatever’s there in a compelling light.

Scheidt directed the short film Tribal Legacy, an eclectic, documentary-style coverage of the Street Legacy art show, celebrating the artists and history of street art in Southern California. For his day job, Scheidt works for an architecture firm, filming projects with architects and interior designers. He has a passion for action sports and has created exciting short films, advertisements, and photos that revolve around biking, skiing, skating, surfing, and more.

Scheidt describes his entry into videography as “unorthodox.” Scheidt grew up ski racing in Washington, and he and his friends would often film each other on the slopes.

Scheidt remembers always wanting a nice camera, and he dreamed of working for Patagonia as a photographer or videographer.

“There weren’t really any portable, inexpensive video cameras that you’d give a 10-year-old at that time,” he said. “GoPro wasn’t quite there yet.”

When the iPhone 5 came out in 2013, he recalled it was a game-changer for taking high-quality photos and videos without an expensive camera. Then, he and his friends would make short edits of action sports, from skiing to flyfishing to mountain biking. He remembers one day with his friends in Spokane when the heavy rainfall had ruined the snow, and they decided to go dirt skiing on a steep hill. They filmed the event and titled the video “Dirt Skiing in Spokompton.”

Once his interest was sparked in film, Scheidt took every opportunity to grow his experience. At Spokane Falls Community College, he became involved in film studies and photography. Although he initially planned to pursue photography in commercial advertising and sports, Scheidt said learning about photographers who documented war and other historical events opened his eyes to the impact good photography can have.

“It was 100% a deep-dive into art,” he said. “I had some fantastic professors who opened my eyes to what photography could be — telling a story beyond selling something or selling a lifestyle.”

“It was 100% a deep-dive into art,” he said. “I had some fantastic professors who opened my eyes to what photography could be — telling a story beyond selling something or selling a lifestyle.”

He worked on several small independent productions in the Spokane area and volunteered many of his evenings and weekends to help complete projects.

“The film industry is nonexistent in Spokane, so anything that was happening, I tried to be a part of that,” Scheidt said.

In Spokane, Scheidt worked on short films like Moon Knight, a 2019 fan-made film about the Marvel comics character (which made his MCU debut on the self-titled Disney+ miniseries in early 2022.) Much darker than its Disney-produced counterpart, the short film harnessed a grim, surrealist, corporate take on the Marvel comics universe. Scheidt joined the production last-minute after working with director Caden Butera on another project. Scheidt explained that the lack of a significant film presence in Spokane helped form him into a “jack-of-all-trades,” helping out on various productions wherever he was needed.

“At one point in time, I’m putting together camera equipment. In another, I’m hanging a light from a ceiling.” He said. “And that was a cool introduction, because there’s a lot of people that want to be in film at Point Loma but haven’t done any [productions].”

After the COVID-19 pandemic caused him to alter his college plans, Scheidt decided to become more proactive about his own film work. He’d recently finished a commercial for a small bicycle company and had received a premium mountain bike as a thank-you. He and some friends he lived with decided to create a film that showcased the bicycle.

“What is feasible for us to do in like a month?” Scheidt remembers asking. “How can we create a time piece for this bike with no equipment?”

After writing the script and planning the production, Scheidt enrolled in a program in Eastern Washington University to complete some general education courses before attending PLNU, as well as making some helpful connections to the film department.

“I took three gen-eds and thought they’d transfer to Point Loma, but then I also took a film class,” Scheidt said. “If I took a film class, I knew I’d have the email credentials to say, ‘I’m making a movie, can I borrow the school’s equipment?’”

Although Scheidt describes the audio as “virtually nonexistent,” dynamic bike scenes and tortoise-and-hare antics are complemented by an intriguing selection of music, which included songs from David Bowie, Dean Martin, and jazz standards like John Coltraine’s “Blue Train,” among others. It helps give the film a fun, timeless edge and emphasizes the pure simplicity of the story.

During his time at PLNU, Scheidt said he was particularly impacted by James Wicks, Ph.D., who was in the process of becoming the head of the film studies program during Scheidt’s last semester. In addition to helping Scheidt with filming Tribal Legacy by setting up lights and capturing b-roll footage, Wicks invited Scheidt to share his experiences as a rising filmmaker and help shape the future of the program.

“We worked on a lot of things together, coming up with projects, figuring out how classes would be taught, even the remodeling of the studio,” Scheidt said. “We worked in tandem a lot together, and he helped me a ton on this movie. It was kind of a masterclass of how to make an extremely low-budget documentary.”

Tribal Legacy, Scheidt’s most recent endeavor, is a short film all about Street Legacy, an art show celebrating some of the Chicano culture’s most captivating — and at times controversial — street artwork. The event showcased the history and future of “often misunderstood” art forms like graffiti art, tattoo art, and low-rider customization, as well as the subcultures surrounding them.

The event was organized by Bobby Ruiz, also known as “Bobby Tribal,” who has been a prominent name in the subculture since creating his own streetwear brand in 1989. His passions lie firmly in Southern California and what he calls the four elements of hip hop: skateboarding, lowriders, graffiti, and tattoos. Jim Daichendt, Ph.D., vice provost for undergraduate studies at PLNU, as well as a prolific art critic, curated the collection for the event. Ruiz and Daichendt, who both feature in the film, worked together to find a diverse array of artists to showcase during the event.

Scheidt said when he first got to the event, he initially felt out of place having no personal roots in the culture.

“I’m a white, middle-class guy from essentially Canada who doesn’t know anything about street art,” Scheidt said. “How did I get involved with a group of Chicano-Hispanic culture in the heart of San Diego?”

Scheidt also said he’s always loved cars — listing Audi and Porsche as some of his favorite manufacturers —  but never understood the appeal of low-riders. As he got involved with the event, however, Scheidt became interested in the roots and history of the low-rider subculture, which has been a staple of Chicano and West Coast hip-hop scenes for over half a century. Tribal Legacy showed the flashy, hydraulic, airbrushed vehicles aren’t just staying around for show — they also have a loving legacy of pride, self-expression, artistic talent, and fun.

“When you get involved with this group of people, you begin to understand the lifestyle,” Scheidt observed. “These people have the craziest families I’ve ever seen, they’re so tight-knit and close to one another.”

The film focused especially on the art gallery, which featured nearly 100 artists who are masters at graffiti, airbrush, tattoo, and mixed-media artwork. Many of the works seemed like they were pulled straight from the 1990 hip-hop scene, and the entire show paid homage to the artists and styles that had come before.

Scheidt highlighted the fact that, in addition to famous artists, the events also showcased lesser-known talents whom Ruiz and Daichendt wanted to celebrate.

“There’s a lot of street art shows, but there’s none quite like this one,” Scheidt said. “You have the best of the best from Mister Cartoon and Shepard Fairey — very famous people — to local tattoo artists.”

Scheidt wanted to clarify it wasn’t quite a documentary — and not a deep-dive piece on Chicano culture, which he feels he wouldn’t have the expertise to create.

“People want to classify Tribal Legacy as a documentary — it’s more of a time capsule,” Scheidt said. “It’s a documentary that speaks about the art show — not about the culture. But they kind of weave [together].”

“People want to classify Tribal Legacy as a documentary — it’s more of a time capsule,” Scheidt said. “It’s a documentary that speaks about the art show — not about the culture. But they kind of weave [together].”

Whether documentary or time capsule, Scheidt succeeded in making the event shine, despite knowing little about the subculture. Scheidt said part of the magic of filmmaking is that by willing to be adaptable, any subject can become compelling. Scheidt’s lived his professional filmmaking life like this so far, and he’s already seeing incredible benefits.

“I think that’s the cool thing about making movies and commercials,” he said. “To paraphrase [Pablo Picasso], you find your inspiration through working: always be doing stuff, because that’s where you’ll find inspiration.”

Tribal Legacy is available now to view on YouTube.