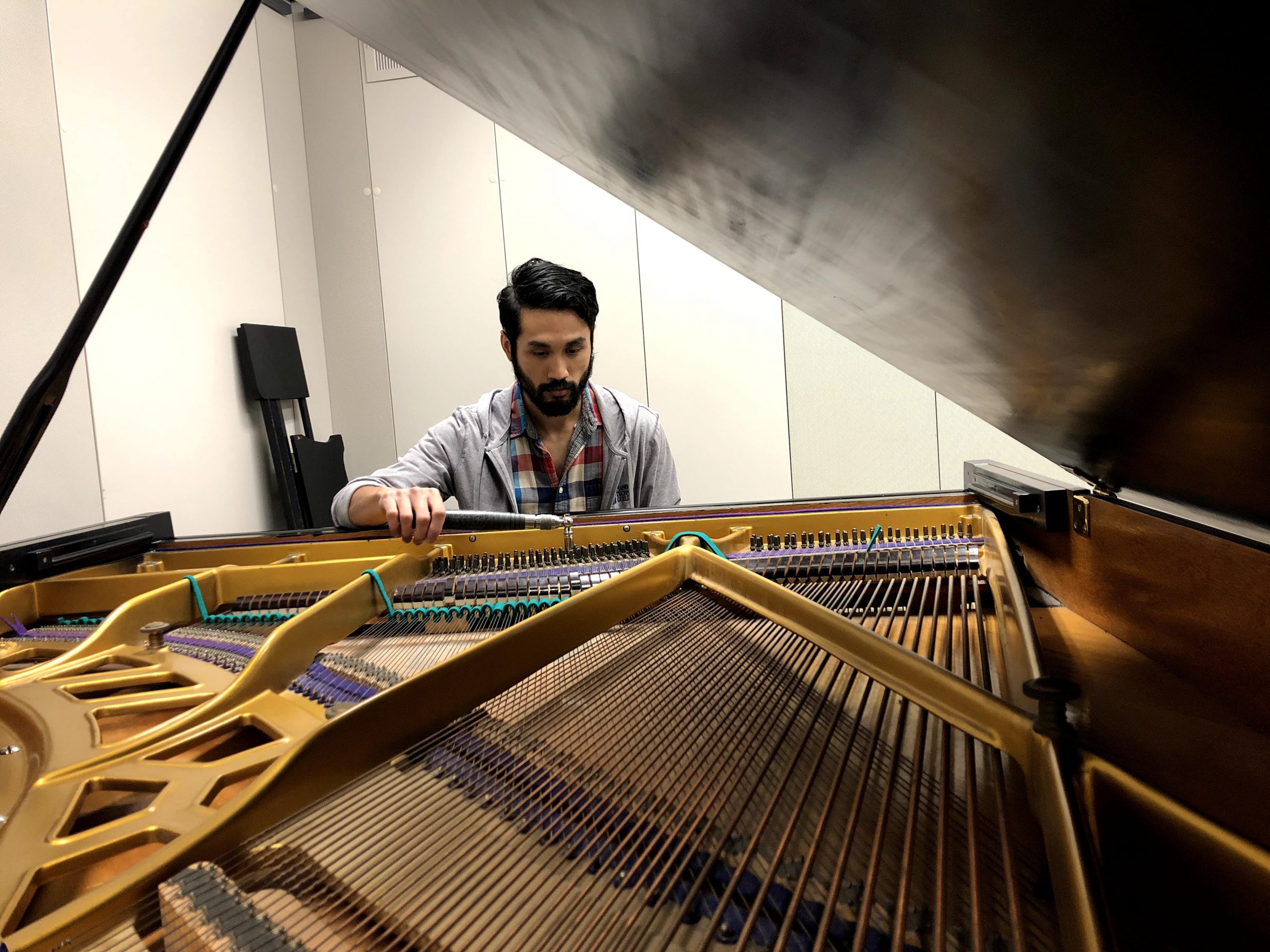 Piano technician, professional tuner, and performer. Of these three titles most individuals are only familiar with the latter, but for alumnus Jarel Paguio, all three are interconnected, mutually reinforcing, and symbiotic.

Paguio graduated from Point Loma Nazarene University in 2010 with a degree in music education before going on to pursue teaching and performing with the piano. He also spent a lot of his time as a piano teacher at the local Recreational Music Center until the global pandemic forced its closure.

“It sounds weird, but teaching at the center taught me how to be a teacher and a student,” said Paguio. “I learned how to continue learning because, as a teacher, you’re also a student, especially the first few years.”

In addition to providing Paguio with regular work, the center is also where he fell in love with teaching the piano. The variety of students and flexibility in programming as well as the opportunity to influence young pianists appealed strongly to his personality.

“Younger students have a moldability and openness about them,” said Paguio. “It’s more ‘I’m going to do this now because you asked me to do it,’ but [for] adults, we’ve found our way in the world … Teaching adults is more about teaching them to be free and open and trust the process.”

“I love taking something that is broken, restoring it and making it sing again.”

Paguio’s teaching process is very reflective of how he hopes to cultivate this kind of freedom in his students. He prefers to rely on in-the-moment instruction and positive feedback which is also authentic to who he is.

“Teaching has shaped me to be who I am,” said Paguio, who tried to create lesson plans early on but found that being himself and playing as an example were better guides.

But these days, that kind of in-the-moment feedback looks different.

In light of COVID-19, Paguio has had to spend time shifting most of his lessons to an online format. He still has some clients who prefer in-person sessions or tunings, but on the whole he’s had to come up with new mediums for communicating the piano to his students.

“Everything’s on Zoom as much as it can be. I’ve come up with some workarounds like using my phone as a second screen and pointing it down at the keys so my students can watch my fingers, and sharing diagrams and my screen as often as possible,” said Paguio.

Fortunately, the shift in his teaching or performance schedule has created space for his other skills in piano tuning and servicing which have come into higher demand.

“I’m getting more clients asking about tunings these last few months,” said Paguio. “The implication there is that they’re probably at home right now trying to play their pianos thinking that doesn’t sound very good.”

The influx in tunings means that Paguio is entering homes fairly often. And while there is some risk involved even with sanitizing and safety measures in place, he also realizes that tuning is important for pianists who use music as their outlet.

“It’s important in the busyness of everything that you’re still able to develop your ear and continue with your lessons,” said Paguio.

Beyond tunings and technician work, Paguio is truly passionate about the 1,000-pound instrument. He wants to see students and clients alike benefit from playing it even during quarantine.

“I love taking something that is broken, restoring it and making it sing again. Naturally [tuning] came about at first because it’s a career, but the people I’ve had the chance to meet are a big part of it now too,” said Paguio, who passed his tuning exam with the Piano Technicians Guild (PTG) and was recently named treasurer for the San Diego chapter.

Paguio says that his investment in the PTG has only grown over the last few months. He believes that “investment begets investment” and this new position has only furthered his commitment to the instrument.

“The piano in particular is a well-rounded instrument because you get the full range of expression with a piano,” said Paguio. “I love being able to harness the language of music in this way.”

The range of the piano might outshine many instruments, but Paguio maintains that some of his most memorable experiences with the instrument are often the simplest ones. They usually take place with students or clients and sometimes get emotional.

“I got finished with a tuning for a piano that had been in this client’s family, and as soon as I looked up she was just in tears saying how this piano hasn’t sounded this good in years,” said Paguio. “And yeah, it’s seeing moments like that. They don’t always happen, but it’s a good reminder that what I get to do here is not just a tune up. It means a lot to the people who own these pianos.”

Paguio plans to continue safely visiting homes for tunings and playing his favorite instrument over the next few months. He’s also been called in to tune a few pianos that were just sold at a virtual auction put on by Greene Music in San Diego.

“The virus has made us hyper focused on a lot of things … but people are still buying pianos, so there’s work to be done and I’m grateful for it,” said Paguio.