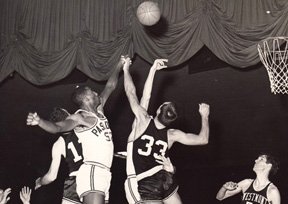 As we begin our first year in the NCAA Division II, we want to look back at some remarkable achievements by athletes who competed for PLNU in the National Association of Intercollegiate Athletics (NAIA).

You may notice that our top-10 list is composed of only nine individuals. That’s because we want you to nominate the 10th honoree. You might also notice that we haven’t ranked the achievements—that’s also your job! Please send your suggestions for the 10th individual and for the top three rankings on the list to editor@pointloma.edu. We’ll weigh your submissions and announce the results in our next issue. 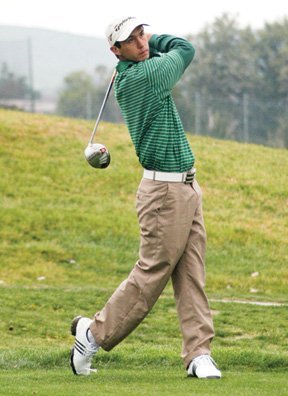 Sam Cyr
Shoots a Round of 60

For two years, Sam Cyr sat atop the NAIA golf rankings, winning the 2008 and 2009 national championships. But his best round came in 2008 at the Grand Canyon University Fall Invitational when Cyr blew up the field with a ridiculous 60-shot second round that tied an all-college level record low round and earned a nod in Sports Illustrated. Cyr ended his PLNU career a four-time All-American and two-time winner of both the Arnold Palmer and Jack Nicklaus Awards. Most recently, he has played tournaments on the Asian Tour.

“To take a look at what Sam Cyr accomplished … as an individual player, may be unprecedented in the history of this school in any sport,” said former head golf coach Ben Foster, who also served as head men’s basketball coach for 17 years. “The level of respect he was able to generate is evidence of that.” 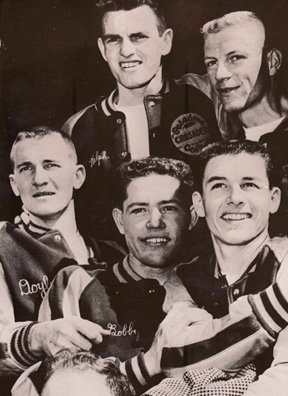 By the end of his basketball career at Pasadena College in 1954, Bob Hopkins (pictured front center above) had established himself as the leading scorer in school history. He just about still is. In three varsity seasons, the two-time All-American tallied 2,323 points, more than anyone had ever scored in a collegiate career at the time, and all in the era before the three-point shot. In 1953, he led the “Firehouse Five” to a 34-2 record, averaging 27 points a game and hitting more than half the shots he took, scoring more than 40 points six times. The team went 86-18 in his time on the team and after graduating, he was drafted by the Minneapolis Lakers in the eighth round. In 1970, he was the first District II player ever inducted into the NAIA Hall of Fame.

“He was the kind of player people would  look at and admire, but he was also known  as a devastating scorer. He knew how to  read defenses and take advantage of them,” said Foster. 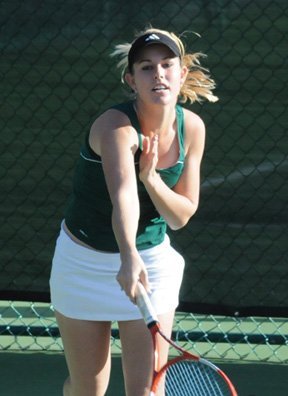 On the heels of her Intercollegiate Tennis Association (ITA) NAIA National Championship in 2011, senior Kristin Strimple swept through the ITA National “Super Bowl” championship, where junior college, NAIA, Division III, and Division II tennis champions are pitted against each other. This capped a career at PLNU where she won a school record-tying 100 singles matches and was named an NAIA All-American four times.

“What made the Super Bowl doable for her is she had such an incredible weapon in her forehand,” said tennis coach Rich Hills. “When you can hit that hard, that consistently, it’s hard to beat.” 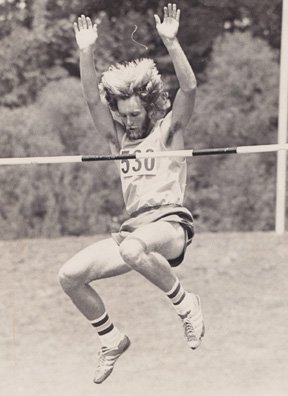 “There was no question he was the big man on campus, yet he never carried himself that way. But you could just see that his focus was off the charts,” said Dr. Karl Martin, who was a freshman the year Waters won his first national championship. 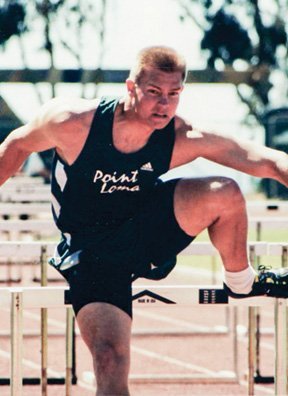 Shane Peterson’s collegiate career culminated in a trip to the 2000 Olympic trials in the javelin, an event in which he won three consecutive NAIA national titles while a Sea Lion. Peterson, a decathlete who finished second in the nation in 2000, has several performances noted in the PLNU record books, including second in the javelin (232-3), third in the shot put (52-5.25), fifth in the discus (161-7), and sixth in the decathlon (7,037 points). He’s now a coach and member of PLNU’s kinesiology department. His colleague Dr. Ted Anderson says Peterson’s transition to mentor makes complete sense.

“What makes Shane a great coach is the same thing that made him a great athlete; it’s his attention to detail. He’s a technician,” said Anderson. 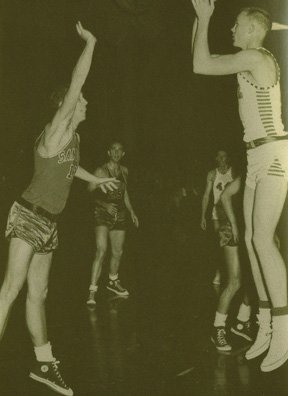 Long before his 14-year tenure as president of PLNU, Jim Bond came from Texas to Pasadena College a highly touted high school All-American basketball player after walking away from Division I football recruiters in 1954. When he left in 1958, “Gentleman Jim” was a two-time NAIA All-American and the 10th most prolific rebounder in NAIA history, averaging 18.3 per game. He still has 250 more rebounds than the next closest Sea Lion and is the third highest scorer in program history with 1,904 points. Bond was drafted by the Minneapolis Lakers with the 48th selection, only to turn the offer down to go to seminary. But the single biggest achievement of his collegiate career may be his selection as an alternate to the 1956 Olympic team featuring Bill Russell and K.C. Jones.

“Jim was a specialist who rebounded, blocked shots, and scored,” Foster said. “He was an athlete who could do just about anything he wanted.” 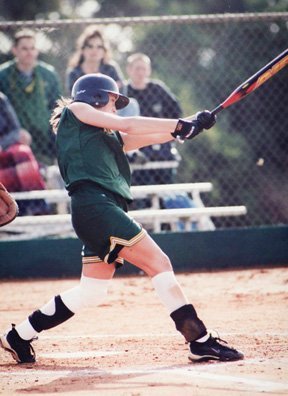 A shortstop and leadoff hitter for Sea Lions softball, Cheryl (Bolding) Schaefer is one of the most decorated athletes in school history. She received NAIA National Player of the Year honors in 2001 and 2002, along with a raft of conference and regional honors. Schaefer holds the school records for most career hits (318) and runs scored (196). Her lifetime .395 batting average, including a blistering single-season average of .478, stands out, as does the fact that she left collegiate competition with the most stolen bases and hits in NAIA history. She also played professionally for two years with the Arizona Heat.

“Cheryl batted from the left and could bunt and hit for power, so defenses couldn’t plan for her,” said former coach Dave Williams, now head coach at Cal State San Marcos. “She had a combination of a passionate attitude, extreme athletic ability, and a really strong work ethic. Usually you only get one of those in a player.” 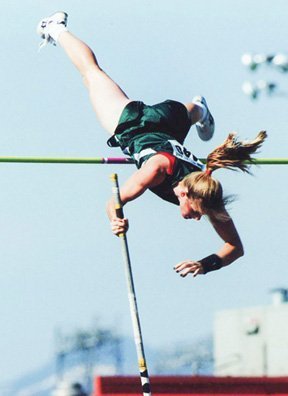 A two-time NAIA champion in the pole vault, Lesa (Kubishta) Matrai didn’t come to PLNU to be a pole vaulter. Instead, she was focused on the heptathlon as well as the long jump and triple jump. But when someone suggested she try vaulting, she was hooked, setting an NAIA record in 1998 with a 14’2” vault and going on to shake off a foot injury to win the 2000 national championship and qualify for the Olympic Trials. Kubishta ended her PLNU career having earned all-conference honors in the pole vault, triple jump, high jump, and 100-meter hurdles. Her vault is still the best in the record book.

“Lesa was just an absolute natural,” said former teammate and current assistant coach Shane Peterson. “She was national caliber and holds a record that may never get touched here.” 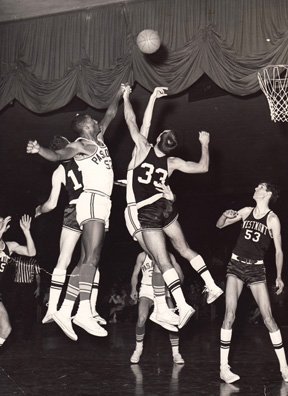 In 1968, Lloyd Higgins was named an NAIA All-American in two sports in the same year, something no other athlete had done in school history. As a senior on the basketball team, he capped a career in which he averaged 22.2 points and nearly 10 rebounds by gracing the cover of the NAIA tournament’s official souvenir program by himself, something that rarely happens. Immediately after the season, he transitioned to track and field where he threw javelin and won both indoor and outdoor national high jump titles. His personal best of 6’10 3/4” is still third-best in school history. Following college, Higgins was drafted by both the Chicago Bulls
and the Los Angeles Stars professional basketball teams.

“Lloyd was just a super athlete who had the ability to do so much in both sports. He was ahead of his time,” said Foster, who played with Higgins during his own college basketball career.