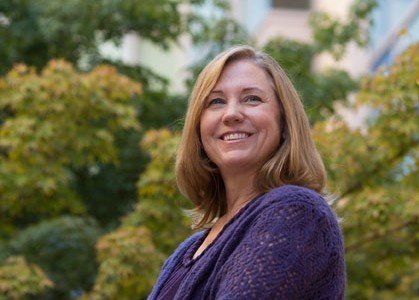 Carol Kibler (87) recalls one clear indication that she was made for the medical field— the thrill of her family’s biannual trip to Oregon to help friends bring their cattle in from pasture. Twice a year since the age of 10, Kibler and her family would administer shots to the cows as well as tag and brand them.

When the cardiac field first began using parts of cows’ hearts in human transplants in the early ’80s, Kibler was in high school. That didn’t stop her from interviewing for a graveyard shift caring for transplant cows. But she wasn’t made for the doldrums of a barn at night; she had adventure on her mind.

Early in high school, she experienced her first professional adrenaline rush during an overnight ride-along on an ambulance. Kibler was hooked. She had suspected that one day she would work in the medical field, but this proved it, narrowing her sights to emergency medicine.

She went to PLNU to study pre-med,  but soon discovered that nursing was her perfect fit.

“I found out just one piece of what nursing could be in college,” said Kibler.  “I fell in love with nursing and being out  on the scene.”

It was only fitting that she took her studies outside the classroom and into the field. Kibler held many jobs in college —serving as a camp nurse in Yosemite, working the night shift at San Diego’s Sharp Memorial Hospital before her 7 a.m. classes, and caring for an elderly patient on weekends—but the most exciting was working as an emergency room dispatcher at Stanford Hospital the summer after her freshman year. There she went on her first life flight. The experience was enough to solidify her career path. Upon graduating, Kibler got a job in the intermediate intensive care unit (ICU) at Stanford Hospital to gain experience in emergency medicine. Following a year in the ICU, she joined the Air Force reserves as a life flight nurse.

But in 1989, after just one year in the field full time, Kibler injured her back lifting a patient on a flight. She left the incident with two herniated discs and an inability to remain in the high-energy, intrepid subset of nursing she’d dreamt of since high school.

“It was a very painful couple of years,” said Kibler. “The first day I didn’t have pain was a year after my accident. It was hard to give up on being an active participant … to be out on the scene of an accident.”
To stay in nursing and still keep the “fast-paced, interesting” aspect that had initially drawn her to her vocation, Kibler transitioned to the neonatal intensive care unit (NICU) at Stanford’s Lucile Packard Children’s Hospital.

“I could lift a baby,” said Kibler.

She still took part in transporting patients, but this time she was keeping close watch over children or babies who were being quickly swept from one hospital to another for transplants.

It’s now been nearly 25 years since she began her work at the children’s hospital. With her passion for new challenges, Kibler made another transition 10 years ago. She now works for Stanford Hospital’s Children’s Home Pharmacy, a program that prepares medications and provides personalized education and training to families about the medications and how to administer them.

This line of nursing may not maintain the rush of emergency medicine, but what it lacks in pace, it makes up for in personal connection. The hurried, raucous environment of an emergency room or a helicopter could never foster the profound relationships she now experiences.

“The long-term connection I have with my patients now is different than any other job I’ve had,” she said.

For example, Kibler’s oldest patient is in her 20s. She was diagnosed with cancer as an infant and has fought through multiple stages of her disease over the years. Her latest round of chemotherapy, a year and a half ago, left her debilitated after treatment. Kibler walked with her through the trauma.

On the day of this interview, Kibler saw her again, leaving an MRI appointment, cancer-free.

The training of families to care for their children, in a way, puts some of Kibler’s work as a nurse in the hands of parents. In the process of reaching out to others, Kibler has experienced her own personal journey—one that is humbling but empowering.

Kibler has seen the best and worst of patient scenarios—in the windy hull of a helicopter and the sacred, sometimes heavy room of a NICU. She has also experienced the joy of career satisfaction and the tragedy of watching a dream fall out of reach. In her latest role, she has discovered a different  type of thrill—one that shows up in the creation of deep and meaningful relationships in the reverent halls of a much quieter hospital wing.