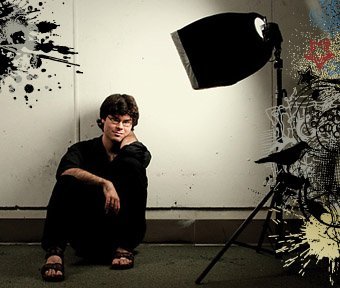 Jeremy Brooks is an artist and an intellectual. He describes himself as an “old soul” and says that he is something of a film buff and movie critic.

Jeremy has big plans, altruistic plans, plans to help other people with autism, plans to educate people not on the autism spectrum. However, he has every reason not to have those plans – to simply look out for number one.

Despite some early signs, Jeremy wasn’t diagnosed with Asperger’s syndrome until he was 7. Even then, his mom, Lori Ciccarelli, says she was in denial about his diagnosis for some time.

Jeremy didn’t find out he had autism until the 6th grade, and at first, he thought his mom said he had “odd-ism” since that’s how his classmates treated him.

“I thought kids just didn’t like me,” he said.

Lori first noticed differences in Jeremy when he was 3. He would distance himself from other children, ignore his preschool teachers, and spin in circles. He had other self-stimulating (stimming) behaviors as well, such as lining up his toys instead of playing with them and flapping his arms when stressed. He had difficulty communicating, which even now, he remembers.

“The spinning was when I was feeling stressed,” he said. “It was calming. I felt anxious at school a lot, which brought out OCD tendencies. It was hard to explain my feelings.”

Jeremy’s childhood and teen years were filled with unkindness from his peers. The intolerance of others toward Jeremy’s differences became more difficult to bear than any of his symptoms. Sometimes he was simply ignored or left out. For example, Lori hosted monthly movie and pizza nights to help create socializing opportunities for Jeremy. Only one friend reciprocated.

Other times, kids were cruel. He was often bullied.

“They basically treated me like a freak,” Jeremy said.

One of the most painful examples of intolerance that Jeremy and Lori experienced came when Jeremy was in junior high. His communication skills were more limited at that time, but he was feeling deeply lonely. Being an artist, he expressed his emotions in a heart-wrenching drawing. He drew a picture of himself being hung with the words “autism – a pariah” written next to it. At the top of the page, he wrote the names of his classmates.

Teachers warned Lori that Jeremy was likely depressed and might be suicidal. In the midst of this already traumatic time, the other parents and children at the school said the picture showed that Jeremy was potentially violent. A rumor started that the names at the top of the picture were actually a “hit list,” and parents said their kids wouldn’t attend school if Jeremy was there.

Lori and Jeremy were horrified. Jeremy wrote a personal letter explaining the misunderstanding and sent it to all the families. Not one person responded.

Meanwhile, many of Jeremy’s therapies were giving him the tools he needed for better interaction with others and better communication. His academics improved, too. Among his interventions were speech therapy; occupational therapy; horseback riding (which helped him with sensory integration); social skills practice such as perspective-taking; and neurofeedback therapy, which Lori said is “like physical therapy for the brain.”

While neurofeedback, also called EEG biofeedback, is still somewhat controversial because it has not been widely studied, Lori and Jeremy feel it made a big difference for him. Another thing that made a difference was what Lori called “rote and repetition.” Learning new cognitive and social skills is a process, she said, and perseverance is key.

Jeremy successfully completed his first year of higher education at his local community college. Though he did well academically, he described the place as “anarchic” and said the other students didn’t have much respect for school or their teachers. He was ready for something more.

Lori had heard about PLNU from Jeremy’s uncle, a pastor. When they visited and met Pat Curley, director of the Disability Resource Center; resident director Rick Engstrom; and Charlene Pate, writing professor and director of the Writer’s Studio, Lori knew PLNU was the right fit.

At PLNU, Jeremy has found a place where tolerance is much more the norm. Lori says that although it still isn’t easy for Jeremy to connect with young people his own age, the students have been nice to him. Jeremy confessed that living on his own, in close quarters with other students (he has a single room in the residence hall), being away from his mom, and managing college successfully have been adjustments. He said he’s had to think in new ways.

Jeremy has formed a strong bond with Pate, who describes him as very “self-actualized.” Jeremy visits with her regularly, whether to discuss literature or life or to get a hug from someone he knows cares.

“He’s so aware of his condition,” Pate said. “He really knows how to position himself. He has a goal to raise awareness about autism. It’s one of the ways in which he is really beyond his years. He really wants people to understand.”

Lori and Jeremy have been featured on NBC news and on Oprah.com and OprahsAngelNetwork.org. They also speak regularly in schools and at conferences to share their story. Lori is being named alumnus of the year at her alma mater.

“My mom and I have talked about starting our own company or nonprofit to raise money for scholarships for autistic people,” Jeremy said. “That’s something I think I would like to do.”

Jeremy, a graphic design major with a minor in writing, would also like to create a graphic novel – perhaps one that tells his own life story. One of his inspirations is PLNU alum and video game creator Doug TenNapel (88).

“I’m not too into the cure movement,” he said. “Autism is just another way of being. The world is a bag of mixed nuts that’s always being shaken up. We need to be open-minded and take the perspective of others. And we need to support the positive things we believe in.”

It’s clear that Jeremy is taking his own advice, doing all he can to support tolerance for people with autism and other differences. He’s taken his trying past and turned it into motivation for helping others.