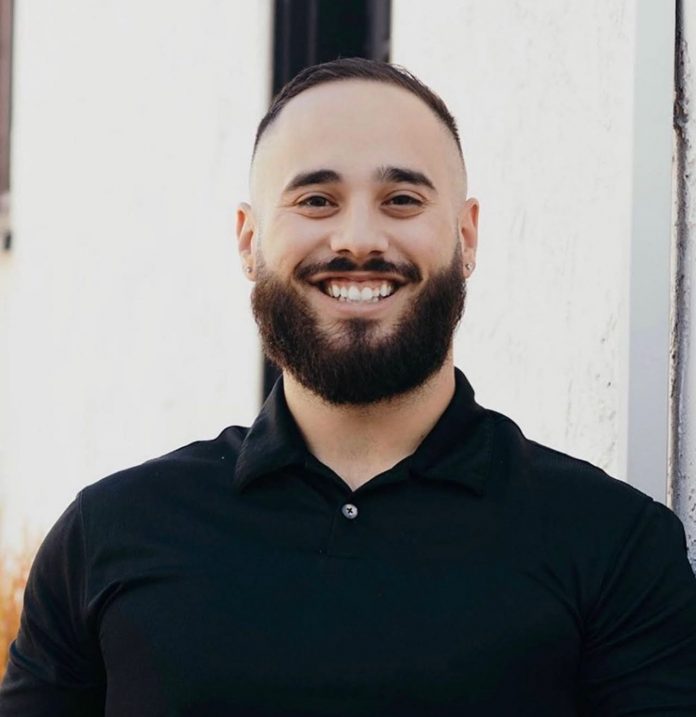 PLNU alum Jessie Schmitte (20) always envisioned going into law enforcement. That changed for him, however, after living through the heightened civil unrest of 2020. Schmitte explained that the climate COVID-19 stirred up and the social injustices that were amplified made him want to pivot in a different direction.

Inspiration for his new path came when Schmitte stepped into his Constitutional Law class — part of PLNU’s Criminal Justice, B.A. program — taught by Geneviéve Jones-Wright, who would have a life-changing impact on him.

“She has guided me to where I am today,” said Schmitte.

Jones-Wright, a former public defender for San Diego County, is the executive director of the impact litigation nonprofit, Community Advocates for Moral Governance (MoGo). MoGo works to achieve racial and social justice and holds the government accountable in its treatment of all people — especially those who are marginalized.

When Jones-Wright shared an internship opportunity with MoGo during class, Schmitte jumped at the chance to work with her.

During his internship, Schmitte worked with Jones-Wright on a number of criminal justice reform projects. One such case was advocating for Amaurie Johnson, a young Black man who was sitting at a trolley station when “an officer walked up to him, forcefully put him under restraint, and handcuffed him when [he] was doing nothing wrong,” explained Schmitte.

“We were at those press conferences advocating for Johnson and his family,” Johnson’s lawsuit is currently pending in federal court.

Schmitte would also have the opportunity to litigate a case for one of MoGo’s clients. “Geneviéve asked me, ‘wanna litigate this? I think you can litigate it,’” recalled Schmitte. Despite having no trial experience, Jones-Wright had confidence in Schmitte to present the case for a taxi driver named Gilberto whose license had been suspended — his only income source.

“[Gilberto] came here from Mexico and he had been harassed for years by someone who he believed may have been associated with the cartel,” Schmitte explained. “When he went to file police reports, we learned that the police failed to do a complete investigation. So not only did he have his taxi license revoked, but he was also charged with assault because he used his cane to defend himself while he was being harassed.”

Schmitte and Jones-Wright appealed this ruling for Gilberto to try and get his license reinstated. “We went to the board of supervisors where I litigated in front of an administrative judge, and I basically laid out the evidence,” Schmitte said.

Two weeks later, the ruling came in: Gilberto’s taxi license was ordered to be reinstated immediately.

“The judge came down hard on the police department and the taxi administration for the way that they handled the case,” revealed Schmitte. “[The judge] complimented our team for the way that we were able to organize [the evidence] and put it together in a way that proved somebody in the community was wronged.”

Gilberto was unhoused at the time, but because of the appeals ruling, “we were able to get the criminal charges dropped which allowed him to seek housing through P.A.T.H., an organization that helps with housing,” said Schmitte.

Since then, Schmitte’s visited Gilberto at his new apartment several times for coffee. “He’s very grateful for the work we did.”

As for Schmitte’s career, that was the fire that lit everything. “I wouldn’t have gotten that experience anywhere else; I don’t think anybody would’ve trusted anyone who’s never litigated before,” Schmitte confessed. “I was very nervous — it was a long three hours. But those three hours were impactful and helped change who I am today.”

“I wouldn’t have gotten that experience anywhere else; I don’t think anybody would’ve trusted anyone who’s never litigated before. those three hours were impactful and helped change who I am today.”

While attending PLNU for his B.A. in Criminal Justice, Schmitte was working full time doing business analytics. His job provided some tuition assistance and allowed him to work remotely since the spread of COVID-19, but he wasn’t deeply passionate about it.

“I would work day and night for MoGo for as many hours as they needed. If they needed me out in the community to go to events or press conferences I said ‘don’t hesitate to call me.’”

“Something that I learned was if you’re not willing to do something for free in life, you probably won’t love it,” said Schmitte.

After graduating with his B.A. in Criminal Justice, he discovered an opening for a job as an assistant for California State Senator Ben Hueso, which Schmitte saw as his next step. Impressed with Schmitte’s internship experience while attending PLNU, Senator Hueso’s chief of staff Ana Molina, offered Schmitte a different position altogether, district representative, “which was much more in the area of what I had been doing,” Schmitte explained.

As Senator Hueso’s district representative, Schmitte is out in the community a lot, meeting with stakeholders, and basically Hueso’s eyes, ears, and mouth within California District 40.

“I’ve learned so much working for him,” Schmitte continued. ”There’s no limit on what I get to learn here in the district.”

Since taking his role of district representative, Schmitte said he’s learned to “never make assumptions about the people that live in your community.”

Having the opportunity to be paid to serve the community he grew up in is something that continues to hit home to Schmitte.

“I now get to change our communities at a level in which we can actually start to change them,” he said. “It usually starts bottom up really because the community’s the one that goes to the government. But now I’m in a place [as a district representative] where I’ve seen my community and I can start to work in ways we maybe have not imagined before.”

“I’m in a place [as a district representative] where I’ve seen my community and I can start to work in ways we maybe have not imagined before.”

Working in South Bay San Diego as a district representative, Schmitte noticed “we don’t have a whole lot of nonprofits that specialize in social justice work or bridging gaps in the low-income communities.”

This led Schmitte to launch his own nonprofit to give back to the community he grew up in — Revolutionary Generation Athletics (RevGen).

RevGen’s mission focuses on cultivating the athletic and academic performance of student-athletes in low-income communities. “RevGen works with many partners in the community to bring colleges into our local high schools and show them the talent,” explained Schmitte.

“I grew up playing football my entire life,” he continued. “And then I started coaching in Pop Warner. So I wanted to be able to do something that focused on athletics and social justice and bridging the gap between our low-income communities.”

“Sports is one of the main resources that we can utilize to really bridge that gap,” said Schmitte. “Kids that come from low-income communities go to sports as an outlet for what’s going on outside of school and inside their personal [lives].”

Schmitte started RevGen Athletics with his best friend of over 10 years, Esteban Perez, who’s a certified strength and conditioning coach.

“We both attended Otay Ranch High School, and something we learned is that just because you go to what is looked at as a well-off school, [it] isn’t always a reflection of the demographics of the students that go to that school,” said Schmitte.

Many of Schmitte’s and Perez’s classmates were in a similar situation, attending a seemingly affluent school but living in a poorer area with less resources to prepare them for college and adult life.

“Could we have learned better financial skills if we were introduced to the right people and [given] the right information in high school?” Schmitte wondered.

“Our program provides an outlet for students to come to, to get athletic training and be able to get assistance in school,” explained Schmitte.

RevGen requires participants to maintain a progressive GPA but not a specific GPA limit. ”Because some students that want to come into our program, they may have a 2.2 and they may have great athletic ability. They just might not have the proper resources to help get them to that 2.5 and then the 2.6.”

Anyone whose GPA slips is set up with a tutoring center free of charge so they can get it back up.

“We’ve learned that when schools set a GPA minimum and kids don’t meet that GPA and they have sports taken away, numbers start to decline everywhere else in their life because now they don’t have to maintain a GPA to be able to play,” said Schmitte. “They usually just quit.”

Students in the RevGen program get access to work out in a state-of-the-art fitness facility and they also get to work with football coach Rolando Rivera, who’s helped over 400 high school students get into different colleges on athletic scholarships.

“Having access to those proprietary equipment setups is gonna be key to helping develop our students and getting them to that next level so that they can play in college,” said Schmitte.

“Our goal as a nonprofit is to get each and every one of these students to college on a scholarship, whether it be athletic or academic.”

RevGen Athletics has raised the funds to launch and will soon be recruiting its first class of baseball student-athletes. “Our goal as a nonprofit is to get each and every one of these students to college on a scholarship, whether it be athletic or academic.”

For those wanting to get involved with RevGen, Schmitte said: “Our community can serve us whether it be through donations, volunteering their time, or simply coming by to meet our future student-athletes.”

Schmitte’s faith is also something that nudged him to pursue a life helping others. “I had a pretty traumatic childhood growing up, as a lot of kids do,” he continued. “But that is something that I used as a focal point and who I was letting God develop up and hone in on.”

Schmitte is thankful he’s been able to work on “both sides of the coin” as he puts it.  “I come from the community and now I’m getting that government experience to be able to transform the community in ways that nonprofits and people like you and I may not be able to do.”

Going to PLNU was a dream of Schmitte’s before he graduated from high school. He made that dream a reality by completing his B.A. in Criminal Justice in PLNU’s Adult Degree Completion program.

“Having the opportunity to go to PLNU was a calling for me. I feel like becoming a product of Point Loma has helped accelerate [my career] in ways I wouldn’t have before.”

A message from Schmitte to his fellow Point Loma alumni:

“We have a large community and we have the capability to reach out, make connections, and talk to people. And as followers of Christ, I would encourage all of our alumni to do that. Get plugged in and connected to better serve our communities.”