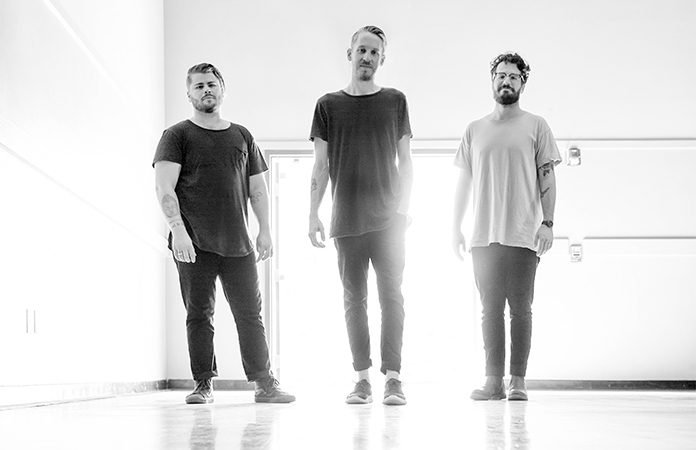 When Jordan Frye (08), lead singer of the band Urban Rescue, had a panic attack while surfing in the ocean — a sacred experience and environment for him — he knew he needed help. Feelings of anxiety had developed in his life over the past few years, and seeking counseling was the necessary next step in his journey toward healing.

He shared some of this with current students in chapel on Oct. 25, as his band, Urban Rescue, led in worship.

The vulnerability and authenticity that came through him that morning silenced the crowd in Brown Chapel. A self-proclaimed perfectionist, Frye shared a question asked by a counselor that resonated with him: Do you believe God loves you? Even though he grew up in the church and always believed God loved him, it wasn’t until he reflected on that question with thoughtful examination that he realized no matter how hard he tried, he didn’t always feel he deserved God’s unconditional love. But his faith in God, who can do the impossible and break us free from all chains, was clear.

After he prayed over the students’ relationships and time here at PLNU, he joined fellow alumnus and band member Nolan Sisk (13) on the stage, where they both first played as students and where Frye became the first intern of George Williamson, PLNU’s director of worship arts. Also joining them on stage for this time of worship was Meaghan Maples (08), spoken word poet Mike Nelder, and several other musicians, making a seven-piece band altogether.

The keyboardist played a steady beat, introducing the song “Freedom” from the band’s recently released live album, City Sessions. Frye’s voice echoed softly throughout the room with the opening lyrics, “Step out of the shadows, come out of the grave,” calling all listeners into a space of acceptance and fearlessness in the presence of the Lord, wherever they were in their journey. It was a time of pure and genuine worship.

When the band played their hit “Never Stop,” about God’s fierce love that never ceases in chasing after us, almost every person in the room was on their feet — many jumping with joy and abandon. Frye raised the energy of every person in the room, including staff and faculty. As he jumped and spun across the stage, smiling ear to ear, he looked at home.

Related Article: From the fiery loss of his home to composing a rhapsody of beauty.

Urban Rescue first formed on this campus almost 10 years ago, and has since gone on to tour with some of the most well-known Christian artists and bands, including Rend Collective, Kim Walker-Smith, Chris Quilala, Hillsong UNITED, and Phil Wickham, to name a few. Most might know Urban Rescue for its 2016 studio album, Wild Heart, which took the #1 spot on both the U.S. and U.K. Christian music charts. Now, the band is collaborating with more artists, using more creative and innovative techniques, including spoken word poetry, and bigger instrumentation. But even as the band expands its influence and creativity, the members often make time to reflect on where they’ve been and express gratitude for the people and places that have shaped their journey.

“It’s very meaningful to have Jordan, Nolan, and Meaghan come and lead us, knowing that they sat exactly where our students sit and went through the same highs and lows in this same room.”
—George Williamson

“There’s a lot of connection when the student body and the campus as a whole feels like these [people] are some of ours,” said Williamson. “It’s very meaningful to have Jordan, Nolan, and Meaghan come and lead us, knowing that they sat exactly where our students sit and went through the same highs and lows in this same room. It’s also meaningful to us that they actually want to come back here, that this campus, this chapel, is a place of significance for them still as they remember the many times and ways God met them as students.”

As a mentor, Williamson played a key role in Frye’s spiritual development here at PLNU, and the two continue to stay in touch. Together, they worked on finding a date when the band could return to PLNU to lead worship and spend the day interacting with students. Urban Rescue led worship in the morning chapel and Frye held a workshop in the afternoon for aspiring student songwriters, sharing some of the beauty and struggles of songwriting. In the evening, the band led worship again at Time Out chapel, during which Williamson shared with the student body about his own journey as a PLNU undergrad, his immense gratitude for the grace poured out on his life here, and the role this place had in transforming his life.

Before Williamson shared his story, students were encouraged to take a few minutes to pass the “Peace of Christ” to one another. This glimpse of life at PLNU showed students not only turning to greet those near them with hugs and high-fives, but also running across aisles and rows to hug friends and strangers alike. As a loud and joyful murmur set in across the room, it was clear the accepting and transformational nature of this loving community was always readily available to everyone — including those who are current students, those who have graduated, and those who serve as staff and faculty.

At the end of the service, Urban Rescue played an encore of “How He Loves Us” by David Crowder Band, for their last song of the day. Lyrics like “If grace is an ocean, we’re all sinking,” were sung by both the band and students in unison. After the band left the stage and the lights dimmed, signaling the end of the evening, students reluctantly walked back to the residence halls, humming the chorus on repeat as the waves crashed just beyond.