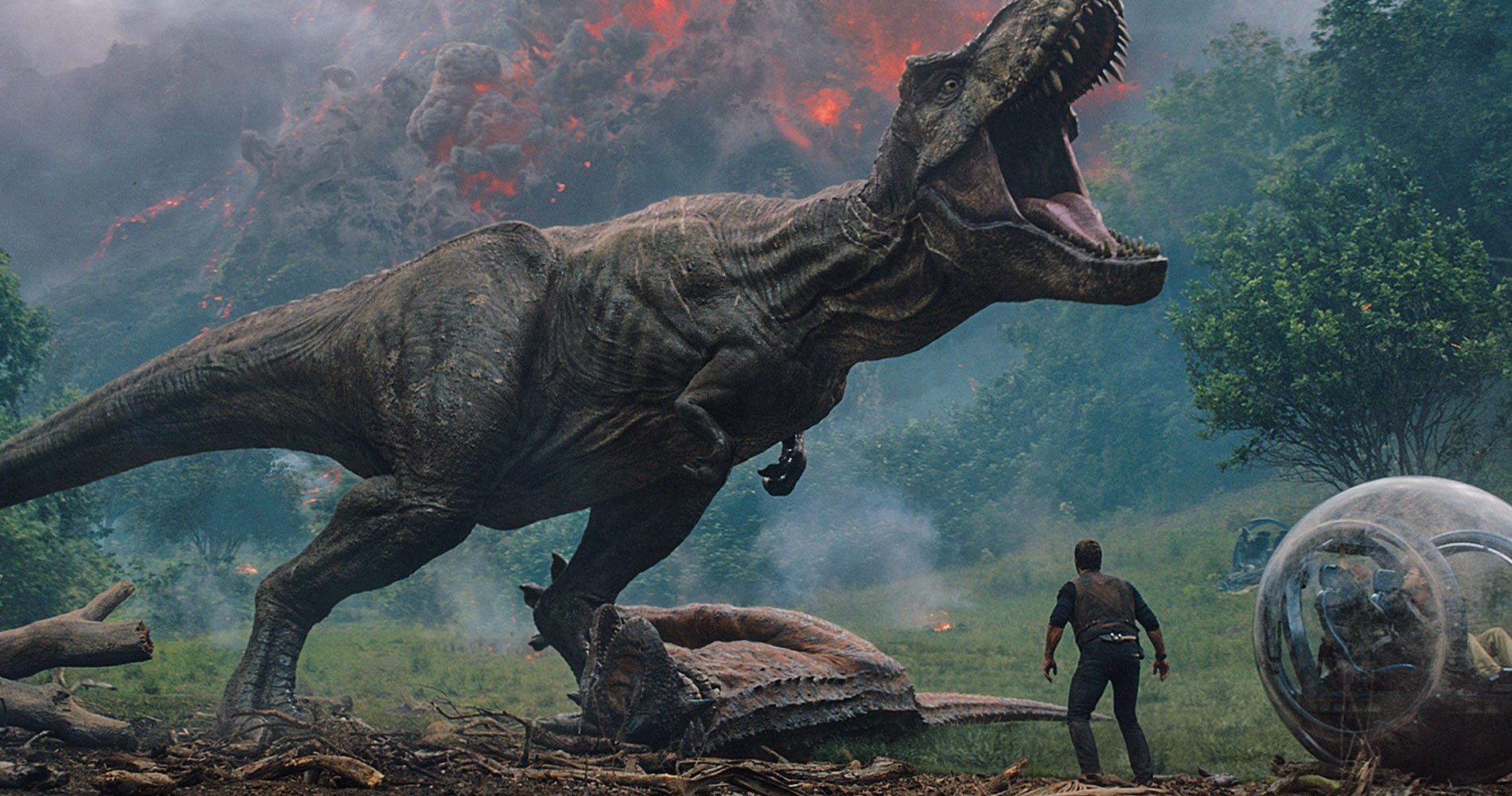 The film’s plot follows the duo as they embark on a mercenary mission to rescue the dinosaurs from Isla Nublar, the island location of both Jurassic World and its predecessor, Jurassic Park. As we are informed, shortly after the events of the first film caused the amusement park to be shut down, the volcano on Isla Nublar, long believed to be dormant, was reclassified as active and is in danger of erupting. This launches a global debate as to whether or not the cloned dinosaurs that inhabit the island deserve the same protections afforded to other endangered wildlife, or if the best course of action is to allow nature to take its course and once again eliminate the entirety of the world’s dinosaur population in one fell swoop.

Since I was young, Spielberg’s 1993 original Jurassic Park has been one of my personal favorites, and I have thoroughly enjoyed both installments of the franchise reboot so far, for little other reason than dinosaurs are pretty cool. Each film in the franchise brings similar themes to the table, among them the dangers posed by human greed, hubris, negligence, and a hungry Tyrannosaurus Rex. But Fallen Kingdom and, more specifically, the inciting conflict of the film, has a relevance to contemporary issues that allows the film to speak more seriously than usual. As our modern technology gets closer and closer to replicating what we see in films like Jurassic World, the films begin to serve as a cautionary tale that prompts us to consider the ethical implications of the scientific power we have. During my viewing of the film, I was especially moved upon seeing the mass destruction of Isla Nublar and the reality of these dinosaurs’ lives being taken by something beyond their control but was within the power of humanity to stop. This prompted me to emerge from the theater pondering this philosophical question: how do we orient ourselves ethically toward the natural world, particularly towards those endangered species that we ourselves may have placed in harm’s way?

Earlier this year, it was announced that the world’s last male northern white rhino had died. The rhino, named Sudan, was 45 years old and lived in the Ol Pejeta Conservancy in Kenya. Only two female members of the subspecies remain. Naturally, this means that the northern white rhino is on an unalterable track to extinction. However, National Geographic reports that scientists have harvested and saved genetic material from Sudan and both remaining female northern white rhinos, and are attempting to sustain the species by manually creating offspring by fertilizing an extracted egg in a lab and then transplanting the embryo to the uterus of a living female, a process known as in vitro fertilization (IVF). While IVF technology is still being perfected and is fairly expensive, it is leaps and bounds beyond our earlier capabilities, and could effectively allow us to bring the subspecies back from the brink of extinction.

Related Podcast: In addition to saving near-extinct species, we might be on the brink of being able to customize our children’s genes and increase our life spans by hundreds of years thanks to technology. But should we simply because we can?

How do we orient ourselves ethically toward the natural world, particularly towards those endangered species that we ourselves may have placed in harm’s way?

From one perspective, this human intervention could be seen as foolish or dangerous, perhaps even unnecessary. Why should it be our role to step in and interrupt natural processes taking place in the world, altering the course of history? In Fallen Kingdom, the U.S. government takes this stance, reasoning that some cosmic or almighty force was responsible for the extinction of the dinosaurs in the first place, and is simply correcting the course of history. On the other hand, perhaps human actions have been the cause for many forms of harm in the natural world. Throughout the Jurassic Park franchise, it is clear that the human attempts to make money off of the de-extinction of dinosaurs had caused them to become short sighted and negligent towards the overall care and safety of the animals. In the case of the northern white rhino, it is poaching, an illegal form of hunting, that has been responsible for a vast majority of the animals’ deaths. In this instance, if human actions were the cause of this harm, should it not be human responsibility to work within our power to mend it?

Related Article: PLNU Professor Dave Gladson explains how we can convert small actions like bringing a reusable water bottle to work or biking on our commute into a lifestyle change that makes a real difference around the globe.

Is the natural world around us meant for us or for something greater?

Those who identify as Christians are most likely familiar with the biblical passage that affirms that man and woman are tasked with subduing and having dominion over God’s created world (Gen. 1:26-28). Now, more than ever, we should thoughtfully consider the interpretations and implications of this passage. Does it instruct us to have a free-use attitude toward our environment? Has God given us a world for us to appropriate for our self-gain? Or are we to occupy the role of steward and caretaker, acting within reason to protect and, when needed, restore that which is in jeopardy? Is the natural world around us meant for us or for something greater?

Jurassic World: Fallen Kingdom illustrates the dangers of the commodification of the natural world. When the only things we consider as a result of life are wealth and profit, we can lose sight of the sanctity of that life. The haunting image of a brachiosaurus stranded on Isla Nublar as the island is engulfed in smoke and fire is one of the most poignant shots in the film. Though the scene is fictitious, it depicts the event of extinction that is altogether too real in our world today. As contemporary technology advances, we are going to be faced more and more with difficult decisions regarding how and when to use it. We can choose to move into the future as bystanders, if not aggressors and destroyers of the natural world, and act only when it is within our self-interest to do so. Or we can instead consciously make an effort to see the life on this planet — human, plant, and animal — as precious and worthy of preservation and care. We may not yet be dealing with cloned dinosaurs, but perhaps that’s for the better.

Tyler Ellison is a student at PLNU.