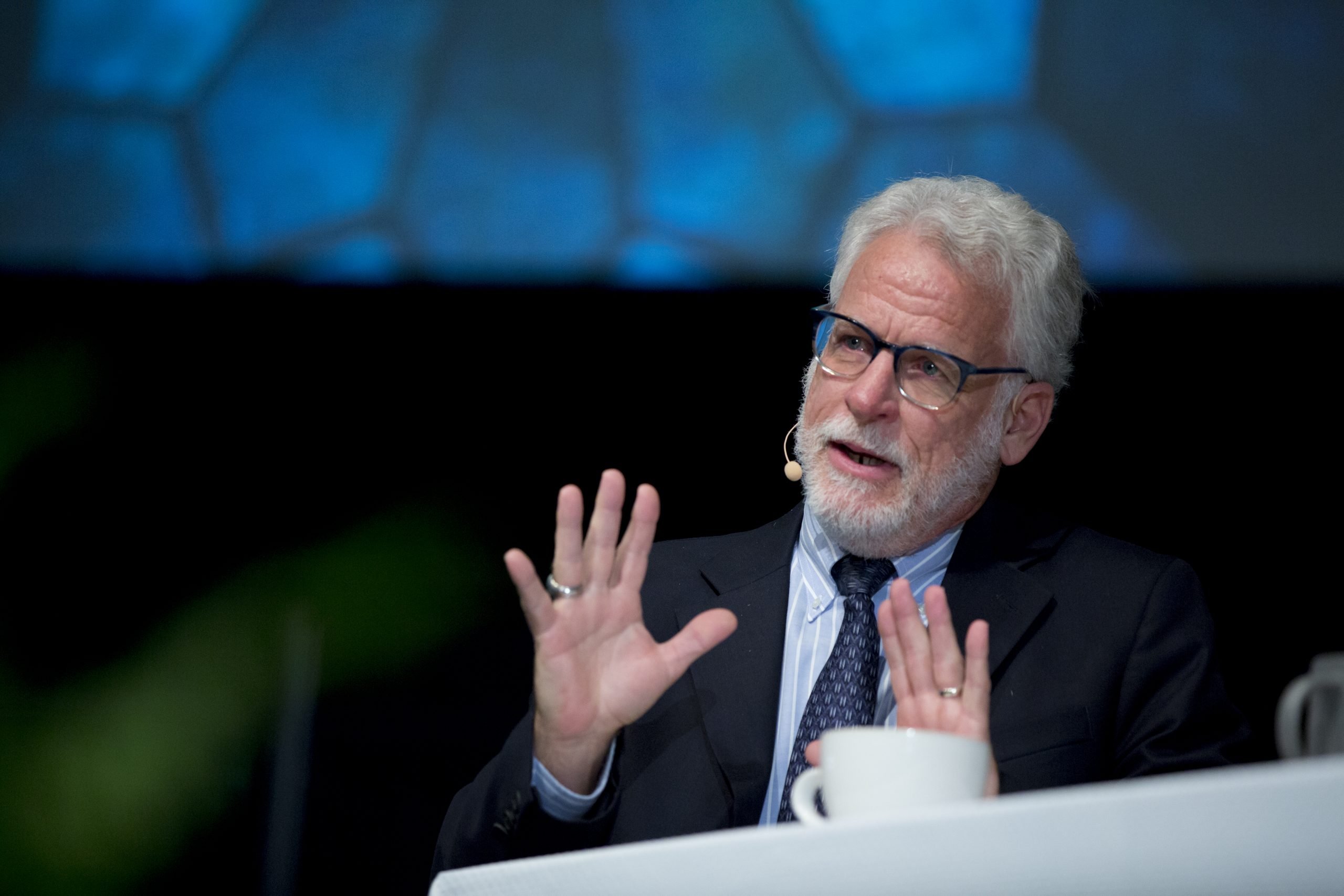 You might see him walking around campus with Leslie Marmon Silko’s Ceremony in hand or sitting outside Bobby B’s enjoying lunch with his nose in Kate Chopin’s The Awakening. As you get to know Karl Martin, Ph.D., what you encounter is the fantastic repertoire of books he’s read and analyzed throughout his career both inside and outside of the classroom.

From the Marvel cinematic universe to poetry to theologians, Martin has a knack for synthesizing the connection points between pop-culture media, religious writing, and classics amid an ever-evolving society. He’s published essays and given presentations in a variety of places across the globe, including the summer of 2022, for example, when he traveled to Amsterdam to present his research on the Shang Chi comic book arc.

According to Martin, books have been a big part of his life since the days he walked the palm-tree-lined sidewalks of PLNU as a student himself.

Martin has been teaching at PLNU since 1998, continuing what he realized he wanted to do as a student.

Coming to PLNU as a student for Martin was a no-brainer, following in his siblings’ footsteps. But deciding what to study required more time and thought.

“I was a religion major when I first came [to PLNU],” he said. “I think partly because one of my older brothers was a pastor and we were really a lot alike. I was always bouncing back and forth between that and literature.”

A fluke schedule change in his first year led him to American literature.

“It was really designed for upper-division students but I didn’t care. I absolutely loved it,” said Martin.

Amid the literature classes, he was still torn between literature, religion, and a new hobby he’d taken up: journalism. During his senior year, Martin was originally wanting to teach, but due to a lack of jobs, he decided to pivot. After writing a bi-weekly column for the campus newspaper, he chose to give journalism a whirl. He got into the University of Missouri’s journalism master’s program and transplanted from San Diego to Columbia, Missouri.

“I hated it,” exclaimed Martin. “What I realized in retrospect was that the kind of journalism that I wanted to do would take so long to get there to do that kind of work. I think I was coming home every day from school complaining about it. My roommate said, ‘Why don’t you quit?’ It had never crossed my mind that I could even do that.”

So that’s exactly what he did. But quitting journalism was not the same as giving up. Martin explored religious studies again at Nazarene Theological Seminary but didn’t feel a calling. Still, he persisted. An epiphany struck him, coincidentally, while he was working at PLNU for a summer.

“I was missing reading fiction. So I thought, ‘This is pretty clear. This is a good path.’”

He headed to SDSU as a master’s student in American Studies.

“The minute I started that program at SDSU, I thought, ‘This is what I had been looking for.’”

Although literature came to him naturally, Martin’s journey to becoming a teacher was less fluid. When he first graduated from PLNU, there were few public education teaching jobs in California which didn’t make it a viable career. It wasn’t until SDSU that he realized teaching was his calling.

“During the last week before classes started, I got a call from the chair of the department who said they had a basic grammar class,” said Martin. “They said, ‘We need someone to teach it.’ I got out a grammar handbook and figured it out. I absolutely loved it. It didn’t feel intimidating; it felt incredibly natural interacting with students at that level.”

“I absolutely loved it. It didn’t feel intimidating; it felt incredibly natural interacting with students at that level.”

He followed the teaching track and ended up going to the University of Minnesota for both his master’s degree and Ph.D., checking another state off the list in his academic journey. That’s where he first wrote about the intersection of pop culture, American literature, and faith.

“O’Conner wrote that a writer’s vision must be a prophetic vision,” said Martin. “I was so puzzled by her work. It was really deeply Christian and also really violent but funny. How do you bring this all together? I remember thinking, ‘I wonder if what she means by prophetic vision has anything to do with what Bruggemann means by prophetic imagination?’ I set down O’Conner and began reading Bruggemann’s book and it really opened up O’Conner in a way I hadn’t thought of before.”

Martin ended up analyzing the two through how they answer the question: How do you balance prophetic criticizing (speaking out about violence, injustice, and loss) and prophetic energizing (affirming God’s renewing power) as a Christian in American culture?

After completing his Ph.D., he continued to ponder that question as he wrote analytical pieces for anthologies and publications.

From dramatic movies like Magnolia and 28 Days Later to graphic novels like Watchmen, Martin discusses the connections in pop culture to the arguments of some of the most remarkable activists and thinkers.

“I’m fascinated that these films, without knowing it, are participating in a larger cultural discourse,” he said. “Pop culture seemed to be open to prophetic voices. Especially voices from the margins that gave voice to people’s experiences who were not enjoying the fullness of American life. What ties it all together for me is I’m trying to balance what it means to be a citizen of the U.S. and what it means to be a disciple of Jesus.”

While writing all these pieces, Martin’s pedagogy with teaching was also starting to take shape. After teaching at Northwest Nazarene, he came full circle becoming a professor at PLNU in 1998. His goals with teaching have ebbed and flowed with each new class of students, but, fundamentally, he says he’s dedicated to empowering students to think critically and comprehensively not only in the classroom but outside too.

“My strategy is to first put the material in their hands, ask them to read it, give them enough cultural background to understand it, and try to be as explicit as I can be that my highest commitment is to the gospel of Jesus Christ,” said Martin. “I just want to put good stories, well told, into students’ hands and have them wrestle with the fact that their American reality is not everyone’s reality, that the system has worked better for others. I have no interest in lecturing about literature, or in telling students what I think about literature. I am interested in what they think.”

For Martin, navigating the darker sides of U.S. history — rife with sexism, racism, violence, and loss — in context to the books he teaches is a necessary and vital part of the learning experience. It’s led him to recognize and deconstruct terms like privilege and representation that students are trying to understand in the classroom as they read authors like Frederick Douglass, Karl Marx, and Albert Camus.

“[We must] be honest about the ways we have marginalized people based on race, class, and gender,” said Martin. “Until we’re honest about our past, you can’t move forward as a society.”

“Until we’re honest about our past, you can’t move forward as a society.”

As he’s moved forward working with different students, listening to and including marginalized voices in his curriculum, and analyzing contemporary books and movies, the lived experiences Martin’s carried with him as a Point Loman through and through are what’s informed his path.

“What was Paul’s admonishment to Timothy? What faithful people I’ve entrusted to you and so you trust others — that’s how I feel,” said Martin. “This community poured so much into my life in many ways before I got here, through my siblings, while I was here as a student, and since I’ve been back, that there’s no way I could repay it. I don’t know who I would be without Point Loma. It’s a sacred privilege to be here and to be one of the people who tries to pay that forward for students.”

Since undergrad, Ellipse chapel parking lot looking down on the city, has been his favorite place.

“It reminds me of the reason we are here: to prepare people to live.”

Ki’s Restaurant off of Highway 101 in North County.

“I took that book to England with me because it was an English novel (and to make Dr. Bettina Tate-Pedersen happy). I’ve enjoyed that book more than I’ve enjoyed a novel in a long time.”

“I’m not listening to any particular artist. I’ve been trying to listen to Rolling Stone’s Top 50 Albums from 2021. I started with 50 and worked my way up. I’m into the low twenties now.”