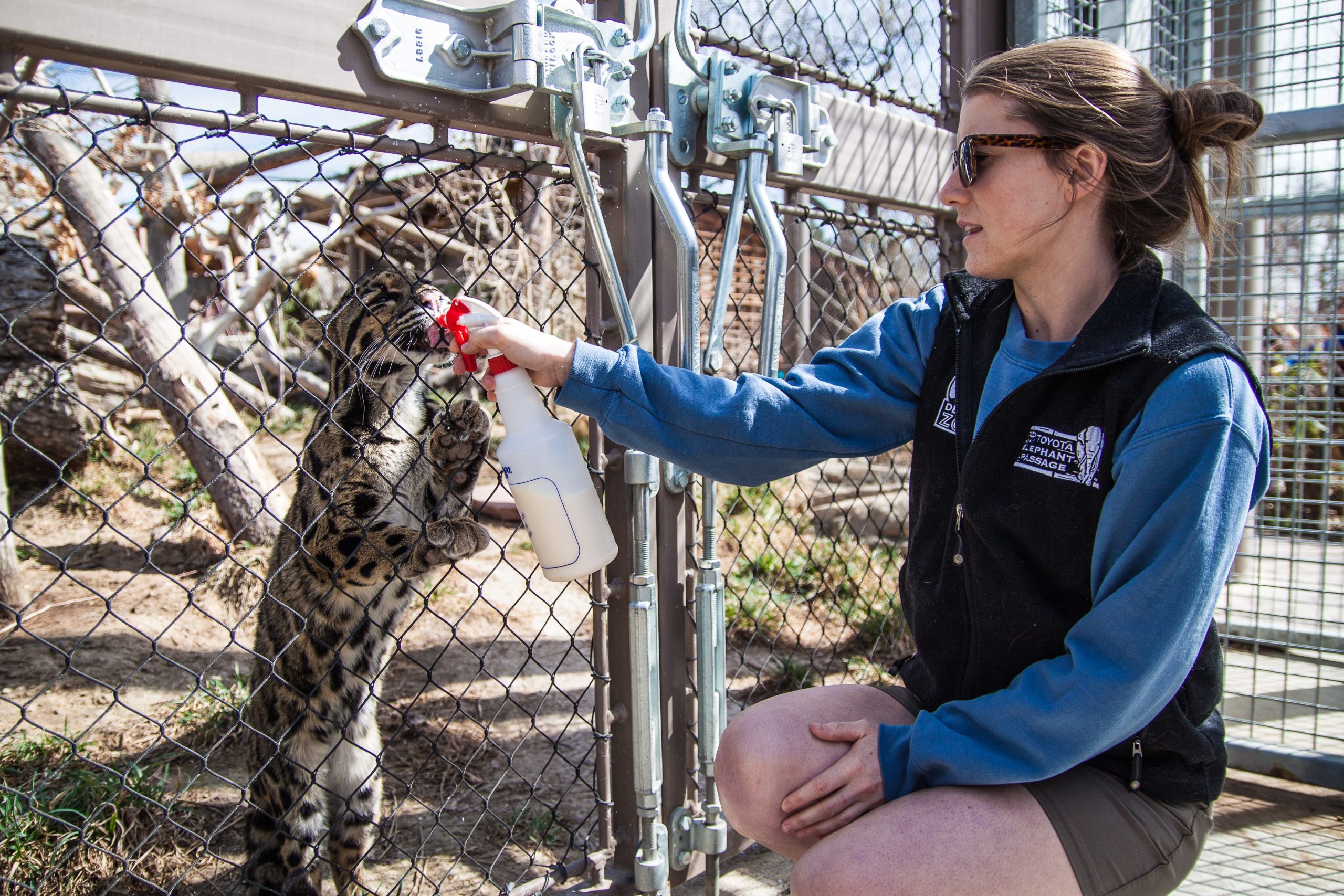 Lions, tigers, and bears oh my! For Denver Zookeeper Kelsey Eggers (14) taking care of animals was never a childhood dream, but during college at PLNU it became her goal.

Eggers was admitted and originally declared to study athletic training at PLNU, until one day in her high school biology class.

“We watched a documentary in my biology class about whales and I was like, ‘I want to work at SeaWorld,’” said Eggers. “SeaWorld is obviously close to PLNU, so I switched my major from athletic training to biology before I got [to campus].”

Although whales were the first animal to pique her interest, it would take several years of learning, interning, and finding her strengths before she’d find her career calling with carnivores.

“I feel like a lot of people I work with grew up working with animals,” said Eggers. “They had horses or have always liked working with animals. While I love animals and feel connected to them, it wasn’t this thing I had known my whole life I wanted to do. It was weird to pivot so late in my life and have this draw to a career I hadn’t really been exposed to my whole life.”

During her sophomore year at PLNU, Eggers got her first hands-on experience with animals. She began interning at The Wildlife Company in Vista on the weekends where she cared for small cats, monkeys, birds, and reptiles, and taught kids about them.

“I was fascinated, and there was so much to learn. I felt like I could never know everything,” said Eggers. “It had this educational piece of teaching kids and also [helped me] learn how to take care of exotic animals.”

As she continued in her biology courses at PLNU, Eggers soaked up all the animal experiences she could get through internships at The Wildlife Company and Wild Wonders, gaining experience in both handling animals and teaching audiences.

When graduation hit, the next step in her career was intimidating. She wasn’t sure which animals she wanted to work with or where she would end up, but she put her name out into the wilderness.

“Out of college, I applied to I think 50 different jobs, and I had a handful of interviews out of those 50 applications,” said Eggers. “I was offered two jobs. One was an unpaid internship and one was a paid temporary job which is pretty typical for getting your foot in the door in zoo work.”

She took the paid job and moved to Colorado where she got to work with elephants, rhinos, hippos, tapirs, clouded leopards, gibbons, and other Asian species.

“I learned I really like elephants — they’re fascinating — but I just really enjoyed the variety [of working with many types of animals],” said Eggers. “I realized I don’t think I want to be an elephant keeper. I don’t have a major animal preference, I just want [to care for] a variety.”

Eggers spent the next few years taking internships and jobs mostly in California and Colorado where she explored her newfound desire to work with different types of animals. She even made a full circle trip back to SeaWorld in 2015 where she served as the aviculturist and provided daily enrichment and medical care for the flock of flamingos at Aquatica park.

However, Egger’s big break finally came in 2015 when she joined the Denver Zoo, getting to work with the variety of animals she always desired. She started out working with rhinos. Then, the zoo was restructured and she added lions, hyenas, wild dogs, and small Asian animals. Now, in her current job, she works with tigers, bears, sea lions, and wild dogs. Her job is extensive from cleaning up to feeding to training and administering vaccines — these duties are also known as husbandry.

“Husbandry is a term we use for overall care for animals — all-encompassing, holistic care,” said Eggers. “We’re looking at overall welfare. As zookeepers, we really do everything. A lot of people are like, ‘You’re a zookeeper. You pick up after the animals, but who feeds them?’ We do everything. Zookeepers are very intentional when they take care of animals.”

Although zoos were originally a symbol of social class and wealth, Eggers said her job and zoos have evolved to be integral in the conservation and education about wildlife.

“We have these animals in a zoo and we want guests to come and see them because if they … have a moment that connects them, then they’re going to be more likely to want to learn more or take care of that animal and the environment that animal lives in,” said Eggers. “While I am not on the frontline of education anymore like I used to be in my first job, if I don’t do my job well, people might not see a certain animal when they come to the zoo.”

Accessibility is at the heart of her work and the zoo’s overall mission.

It’s a demanding job both in the duties required and the stress it can induce.

“Especially working with social carnivores, it can be high stress,” said Eggers. “Social carnivores fight. It’s natural and to be expected, but it can be really intense and hard to watch, especially if you feel like there’s something you should do about it.”

However, she’s learned through trial and error how to cope.

“The way I’ve learned to handle the stress has changed over the years,” said Eggers. “Initially, I felt like I needed to do something, be solution oriented, and problem-solve. Now, I’ve learned that if you react right away, you can add to that stress. To be calm, watch, communicate, and think about what’s in my control [is how I respond now].”

Kelsey Eggers’s goal that took shape on PLNU’s campus came to fruition by being bold, putting herself out there, embracing variety, and caring for her environment — a story truly part of the zoo experience.