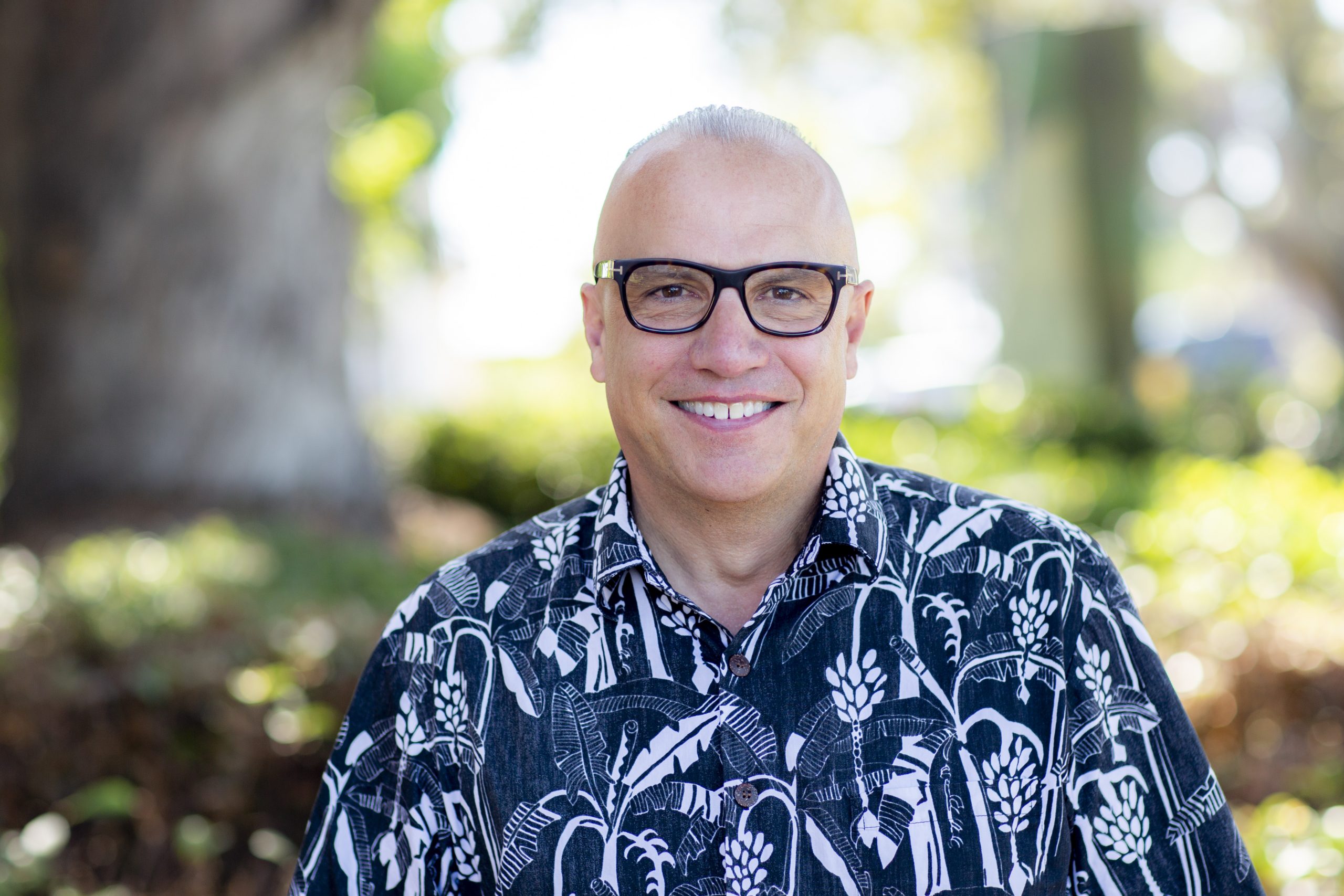 When you enter one of Kim Schaeffer’s, Ph.D., classes, you’re guaranteed to be welcomed with a smile — whether from the students or Schaeffer himself — that only models a fraction of his courses’ positive energy and intentionality.

Schaeffer’s classroom buzzes with conversation, an invariably collaborative and relational environment. Since 2012, the psychology professor has incorporated Team-Based Learning (TBL), a teaching method where groups of students collaborate on real-life application exercises and exams, eventually sharing their ideas with the entire class. This strengthens the relationships between students while fostering a deeper understanding of the course’s content.

“We are all in this learning community together, and it is so exciting and positive.”

Schaeffer was first introduced to TBL at a conference held by the Center for Teaching and Learning in San Diego. Sparking his interest, he slowly brought it into the classroom, starting with a psychology research class.

“After I did the first application exercise and I saw students get passionate about statistical design, I felt like I struck gold …. I mean when does that happen?” Schaeffer said. “When people enjoy themselves, they are learning, and they are applying.”

Watching his students’ interest in psychology reminds Schaeffer of when he was an undergraduate student himself.

The Road to Psychology

As the son of first-generation high school graduate students, Schaeffer always knew he wanted to attend college. However, he entered Eastern Nazarene College (ENC) with a different career path in mind.

“When I went to college, I really felt that I was called to be a minister. I was raised in the Church of the Nazarene and had such a positive experience growing up in it,” Schaeffer said.

The Church instilled the importance of helping others in the Pottstown, Pennsylvania native. While he aspired to fulfill this vocation in Massachusetts, higher education was new territory for him.

“I was a first-generation college student, and I really did not know what I was getting myself into in college,” Schaeffer said. “I’m taking this biology class and the person teaching it has a doctor of philosophy degree. I told my mom, ‘this school is not any good; why do they have a philosopher teaching biology?’”

He recalls grabbing stacks of books at the Boston Public Library to work on research papers for personality theories.

“It was a great experience just to be among people that are studying and thinking hard in this grand old beautiful building with ceilings that are a hundred feet high,” Schaeffer said.

Schaeffer’s love for psychology began during his first semester at ENC while taking a general psychology course.

“When I studied how the brain affects the mind, I just fell in love. It helped me understand the human experience better.”

“When I studied how the brain affects the mind, I just fell in love. It helped me understand the human experience better,” Schaeffer said.

This prompted his decision to switch from studying psychology instead of ministry. Schaeffer then transferred to Southern Nazarene University (formally known as Bethany Nazarene College) in Oklahoma, stating this as one of the best decisions he’s ever made.

He reminisced on the small-town cowboy culture of Oklahoma City and had fond memories of attending Oklahoma University football games.

“I had a professor at Southern Nazarene University who cared so much. He really gave compliments and built up my confidence so I could think that I could go on to graduate school as a first-generation college student who had no idea what psychology was until his freshman year of college,” Schaeffer said.

Once completing his undergrad, he was accepted into the Ph.D. program in Biological Psychology at the University of Oklahoma Health Sciences Center and received a four-year fellowship from the Oklahoma Medical Research Foundation.

After graduating from that program, he earned a Ph.D. equivalent in clinical psychology at Oklahoma State University to work as a certified counselor. This included a one-year psychology internship at the University of Tennessee Veterans Administration Medical Center in Memphis.

With each advancement in his education, Schaeffer fell more in love with psychology and the support he received from his Nazarene-affiliated institutions.

“Here I was, not knowing what psychology was before I went to school. I can’t thank the Nazarene Church enough for having outstanding colleges across the country,” Schaeffer said. “I would have it no other way than how it happened, in terms of my education, because of the caring professors at the Nazarene Colleges that were so influential.”

The support Schaeffer received led him to PLNU.

As those who attend a Nazarene university are well aware, the professors foster meaningful relationships with students that can last well beyond graduation. This experience was no different for Schaeffer. After receiving his doctorate, Schaeffer planned to become a clinical neuropsychologist, yet this all changed after calling his SNU history and psychology professor, Dr. Forrest Ladd.

Ladd mentioned an open position in PLNU’s psychology department, but at the time, Schaeffer had already accepted a year-long psychology internship in Memphis.

Schaeffer called the university, which flew him out the next week and offered him the job for the following year.

During his first year at PLNU, Schaeffer reflected on what path would suit him best. At the time, he was in high demand for research and clinical neuropsychology positions once completing his research program. Yet PLNU still stood out as the right decision.

“It was clear for me to help mentor students like I was brilliantly mentored as an undergraduate. If not for my mentors, I do not think that I would be where I am as a first-generation college student.”

“It was clear for me to help mentor students like I was brilliantly mentored as an undergraduate. If not for my mentors, I do not think that I would be where I am as a first-generation college student,” Schaeffer said. “They really took an interest like the professors here at Point Loma.”

When Schaeffer started at PLNU in 1989, the department had three psychology faculty members. Today, the university has eight full-time faculty and many adjunct professors.

After nearly 35 years of teaching at PLNU, Schaeffer has undoubtedly made a lasting impact on the department.

In 2011, he and his sisters started the Sara Beideman Memorial Scholarship for first-generation college students, a tribute to his aunt who wasn’t able to finish high school.

“She would like going out to restaurants and ask the servers if they were going to college,” Schaeffer said. “If they were, she would be so happy. Everybody needs a good college education, and I just remember that growing up.”

In the fall of 2005, Schaeffer started the PLNU Psi Chi tennis tournament. Photographs from the past 33 biannual tournaments are hung throughout the Psychology department and his office, serving as a testament to the community it has enriched.

The tournament has grown in popularity throughout the years.

In most tournaments, there are 12 teams of four, composed of students from all departments and psychology faculty. Standing above the PLNU tennis courts on the morning of the tournament, you can see teams dressed up in various costumes conversing, smiling, and playing tennis.

“It is an amazing experience for the faculty to spend time with the students and vice versa, just to see each other in a different context,” Schaeffer said. “The tournament in and of itself is more about fun and positivity instead of who wins.”

He loves how the psychology department encourages self-expression and is open to each faculty member’s particular teaching style. To Schaeffer, implementing TBL-influenced application exercises and storytelling has suited him and his students best.

“In my opinion, this is so much better for the students, especially in the psychology classes,” Schaeffer said. “Psychology encompasses so much, and it helps us think about ourselves and laugh about ourselves. It is such a strong and powerful discipline, and the positive psychological approach just magnifies that.”