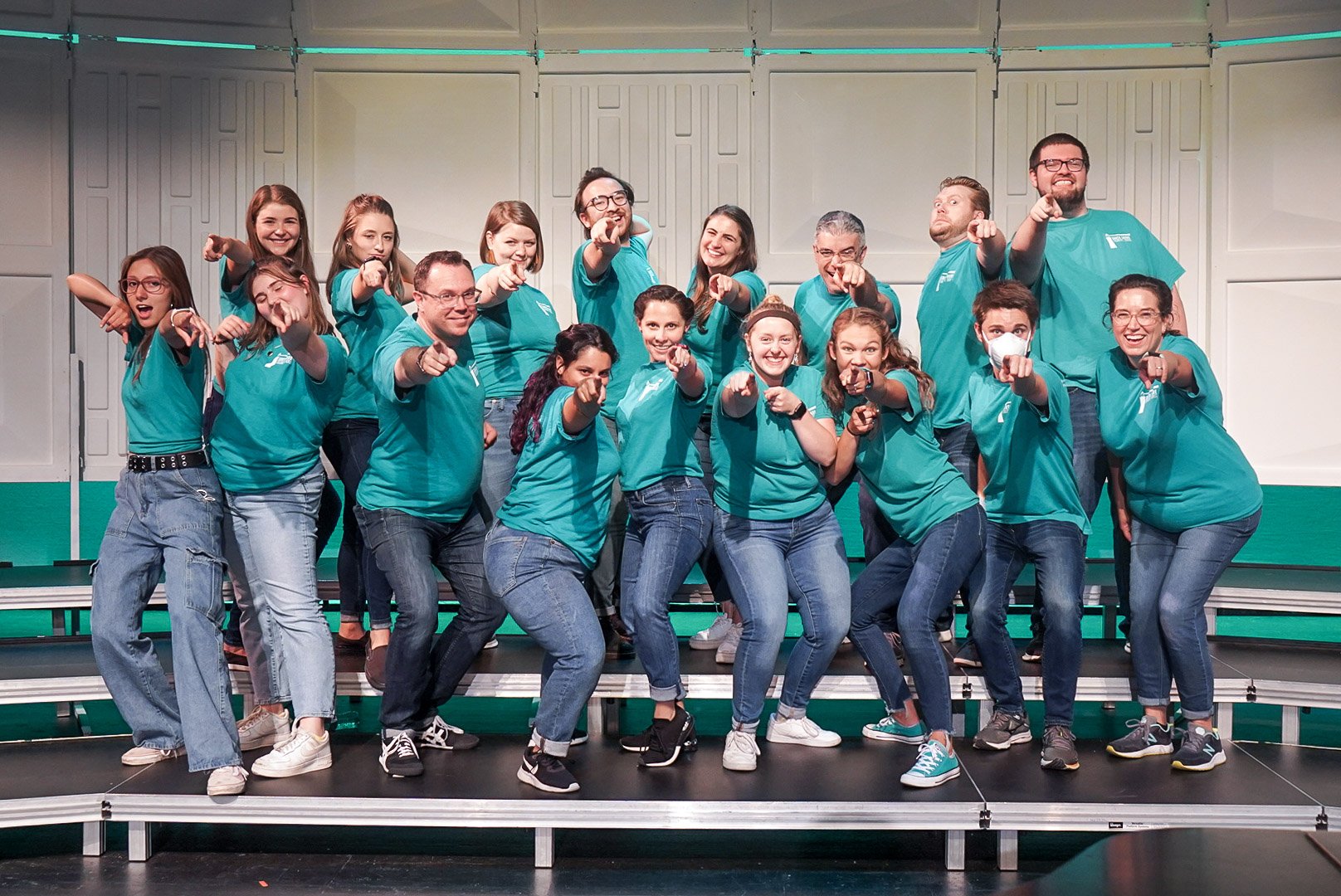 Kirsten Oberoi (13) believes singing should be for students of every skill level. Oberoi is the founder and co-director of South Shore Children’s Chorus (SSCC), a nonprofit choral program for students that emphasizes culture, community, and inclusivity. Originating in Quincy, Massachusetts in 2016, SSCC now serves in four locations and has grown from 60 to 175 singers in grades K-12.

Unlike other outside-of-school musical groups, South Shore Children’s Chorus doesn’t audition its singers before entry. Instead, the club is “sign-up, show-up,” so students don’t feel like they need to compete with others for a spot.

“We’re starting a culture that gets rid of elitism,” Oberoi said. “It’s all about enrichment, engagement, and inclusivity in music.”

Describing the dynamic as “a club soccer for chorus,” Oberoi emphasizes qualities she’s enjoyed most in music groups growing up. The end goal is to help students engage with the music and each other, rather than to extract the best sound possible.

“The individual is the priority; the music is the vessel, and excellence is the byproduct,” Oberoi said.

“I spent a good amount of my teenage years saying I would do anything other than being a public school music educator, because I had to be different from my parents,” she said. “Later on, I did it, and of course fell in love with it.”

At PLNU, Oberoi studied music composition and was involved with PLNU’s vocal groups, including Point Loma Singers and Vocal Jazz. The director of these groups, Keith Pedersen, Ph.D., made a huge impact on Oberoi’s life — partially because she had so many classes with him.

“There was one semester where I had Dr. Pedersen for conducting, music history, chorus, vocal jazz, and Thursday-night choir,” she said. “I would wake up that semester on Thursdays and realize I couldn’t miss any classes — he would know.”

Oberoi described her relationship with Pedersen and his family as the most influential part of her time at PLNU. She said Pedersen would often challenge her on her leadership skills and encourage her to always improve, no matter how much she’d achieved.

“Pedersen did shape me as a musician, but more importantly, he shaped me as a human being,” Oberoi said.

Pedersen often said Oberoi would be an exceptional high school teacher; however, she was still set on doing something other than teaching. She did nonprofit work, helped direct before-and after-school choruses, and sang professionally in churches and local groups.

“I was still going to do anything but music education,” she said. “I cobbled together some things for a couple of years.”

When Oberoi was 25, her husband went back to school, and she took on more of the financial burden, leading her to finally apply for her first teaching job in the summer of 2016.

“I thought I should probably try to bring in some more money,” she said. “I decided that I can’t just freelance my life away.”

Oberoi briefly became the artistic director of what she called a “fancy children’s chorus” in Boston. However, the competitive, stressful nature of the group didn’t sit well with her.

“I was set to prepare these kids for a big performance with the Boston Symphony Orchestra in Symphony Hall, and I absolutely hated it,” she said. “It didn’t feel right to me that the kids were competing for roles, and they didn’t even like each other, even though they were in the same chorus.”

In 2016, Oberoi decided she would create a new choir. She initially created the South Shore Children’s Chorus using space at Quincy Point Congressional Church, with the mission to embrace the fact that students have different goals and encourage an environment of kindness and inclusion. At the start of each year, Oberoi explains to the students that some of them have had more singing experience than others and that it’s a place for musicians of every skill level.

“I say to my students, ‘if you don’t have chorus at your school, raise your hand,’ and about a third of my group raises their hands,” she said. “I ask the other kids if those that don’t have chorus at their school are any less worthy of being here, and that’s an easy answer for them.”

Oberoi said this moment is great to call back to if more advanced singers feel the others are falling behind or ask simple questions. It helps encourage the students with more experience to come alongside newer musicians and help them.

“I’ve written a lot about music educators embracing that people are there with different goals and come from different musical experiences,” she said. “I have kids that have chorus twice a day and are singing all these masterworks, but I also have kids who go to vocational schools with no music background but want to sing.”

Oberoi explained she’s talked to a lot of educators who struggle with the idea that there’s no audition process or placing based on vocal skill level, which is rare for high school groups not to have. Instead, Oberoi asks the simple question: ‘do they want to be here?’

“If they want to be here, it’s my job to teach them,” she said. “Then, I’ll take them from wherever they are and make them slightly better — it’s not their job to already be good.”

“If they want to be here, it’s my job to teach them. Then, I’ll take them from wherever they are and make them slightly better — it’s not their job to already be good.”

The lessons Oberoi learned with SSCC also informed her teaching in public school. Especially during the COVID-19 pandemic, Oberoi had to dramatically shift how she viewed herself as an educator. When the pandemic restrictions were set in place, choirs were not allowed to sing indoors because of its heightened risk of spreading the virus. Due to Massachusetts’ cold weather, they were also unable to meet outdoors. Oberoi said being in charge of a room full of students who loved singing but couldn’t sing was discouraging.

“One day I walked into my shared office and asked, ‘What do I have to offer students if I can’t teach them singing,’” Oberoi remembered. “One of my colleagues looked at me and said, ‘I think you probably have a lot.’”

Oberoi said she didn’t fully see what she had to offer as a teacher until her area of expertise was stripped away. Although lessons often weren’t fully planned, she filled her class time with meaningful conversations about mental health and other topics. She made the most of each class period by determining what would be most beneficial for the students’ lives, addressing big challenges they were facing during the COVID-19 pandemic.

“There was one particular group of students that was really struggling during the pandemic, so I spent a night writing each of them an encouragement note,” Oberoi said. “Last summer, one of the girls that was in the class said she was planning to get a tattoo of one of the lines in that note, because it impacted her so much.”

“There was one particular group of students that was really struggling during the pandemic, so I spent a night writing each of them an encouragement note. Last summer, one of the girls that was in the class said she was planning to get a tattoo of one of the lines in that note, because it impacted her so much.”

Although she made more of an impact than she imagined as a teacher, Oberoi has recently ended her time as a public school teacher to commit more fully to directing with South Shore Children’s Chorus.

“I jumped with both feet and see where it lands me,” Oberoi said. “I have put in the work of organizing the board for South Shore, and they’ve offered me a salary for this year.”

South Shore Children’s Chorus has experienced exponential growth, particularly in the past year. Oberoi believes this growth was possible because of the time and energy she and the other directors have been able to pour into it. They’ve been able to expand to other locations, with a fourth location coming this fall. Within the first decade of SSCC, they hope to include students from all areas of the south shore.

Oberoi believes the heart of South Shore Children’s Chorus continues to teach students with a mindset of making music an enriching, fun experience. She loves that SSCC helps students enjoy music without imposing heavy expectations or competitive structures on them.

“Even if you don’t work hard to reach your fullest potential at something, that doesn’t mean it’s any less beneficial,” Oberoi said. “Make sure you define success by your own terms, not what other people want.”