Home 2015 Spring Kissing the Witch Doctor: What Love Does (with Bob Goff) 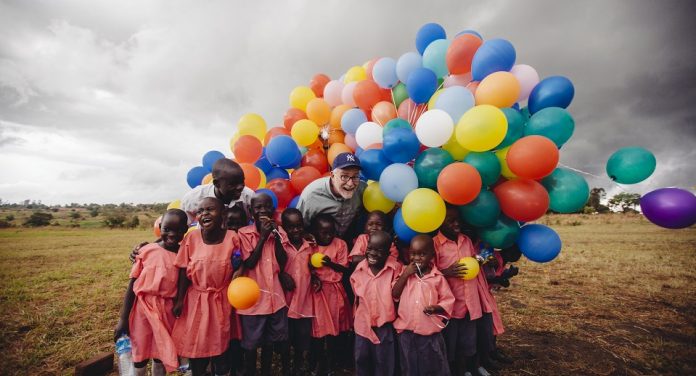 “I don’t think anyone aims to be typical, really. Most people even vow to themselves some time in high school or college not to be typical. But still, they just kind of loop back to it somehow. Like the circular rails of a train at an amusement park, the scripts we know offer a brand of security, of predictability, of safety for us. But the problem is, they only take us where we’ve already been. They loop us back to places where everyone can easily go, not necessarily where we were made to go. Living a different kind of life takes some guts and grit and a new way of seeing things.” –Bob Goff, Love Does

Every Wednesday, Bob Goff, PLNU adjunct professor of business, author of New York Times bestseller Love Does, and founder of Restore International, a nonprofit human rights organization operating in Uganda, India, and Somalia, goes to Tom Sawyer Island in Disneyland. He is a lawyer, and though it has not been identified as such to the Disneyland staff, the island is his office.

Restrictions, normality, and the impossible are foreign concepts to Goff. He follows after God with the understanding that Christ calls us not only into a life without borders or limitations, but perhaps more importantly, into a life of adventure—a life beyond our imaginations and inhibitions—and a life of action with others.

This whimsical and atypical way of following after Christ has led Goff on countless adventures, many times to Uganda. He learned of a common practice of local Ugandan healers, or witch doctors, who abducted, mutilated, and killed young children for ritual religious sacrifices. Goff ’s horrified reaction was not uncommon, but his response was. As the Honorary Consul for the Republic of Uganda and an attorney, Goff was the first in Ugandan history to bring a witch doctor to trial for attempted murder, and he won. The guilty verdict set a precedent in Uganda through which justice and change could be enacted.

Goff did not stop there. He began to hold meetings with a multitude of witch doctors throughout Uganda to not only stop their brutal and atrocious acts, but to also find out what it was they needed. Their response was almost unanimous: “an education.”

He and several graduates from Restore International’s Restore Leadership Academy, a primary and secondary school established in Northern Uganda by Goff, started an in-class educational program for witch doctors.

“One of my favorite images is when I get to see them write their ABCs for the first time on a piece of paper, when they used to be out there killing kids,” Goff shared.

In November 2014, he and his team also started a mobile school in Gulu, Uganda, through which they travel into “the bush” to gather and educate witch doctors they otherwise would not meet. As part of the class, Goff takes the witch doctors up into the trees and together they complete a fun yet frightening ropes course. While 80 feet up in the air, Goff asks them to stop the violent acts they have committed, and sometimes, his requests come with a few harmless pushes.

Goff understands that to make significant change, everyone needs to experience the love of Christ. Standing in a room with a class of graduates from the academy, Goff expresses love in a way most would deem unfathomable—he shakes the hands of each witch doctor, cups their faces in his hands, and kisses their foreheads. He then warns them that there will be ramifications if they choose to hurt any more children.

Goff frequently enters into situations of conflict to love those labeled unlovable, untouchable, and even enemies. Although this love can be tough, he is adamant in his attempts to validate and encourage others, always seeking to know and call them by their names, as Christ did. Every chance he gets, he also takes off his shoes while in conversation.

“It reminds me to be humble,” Goff explained. “There’s something so beautiful about that. It’s an acknowledgement that He is here and that this is holy ground. It also makes it so we can literally go toe-to-toe with each other!”

Goff believes that if we make situations about being on a specific side, we aren’t going to get anywhere. As a way to express his servanthood to the Ugandan witch doctors, he asks to wash their feet after every meeting filled with tension and potential danger. Goff’s love for his enemies is evident through his actions and through his continual attempts to lay himself down before them.

On the cover of Love Does is an image of balloons, intended to remind others of the adventure open to all. This illustration is indicative of Goff ’s desire to be purposeful about his actions and his commitment to launching people into the world. Believing in the importance of accessibility, Goff also published his personal cell phone number in the back of every copy. His imagination, curious heart and mind, and joyful spirit (which lead him to believe the streets of Heaven will be lined with Dippin’ Dots!) keep Goff on his toes and always desiring to be on his knees before Christ.

“Being engaged is a way of doing life, a way of living and loving,” Goff wrote in Love Does. “It’s about going to extremes and expressing the bright hope that life offers us, a hope that makes us brave and expels darkness with light. That’s what I want my life to be all about—full of abandon, whimsy, and in love.”