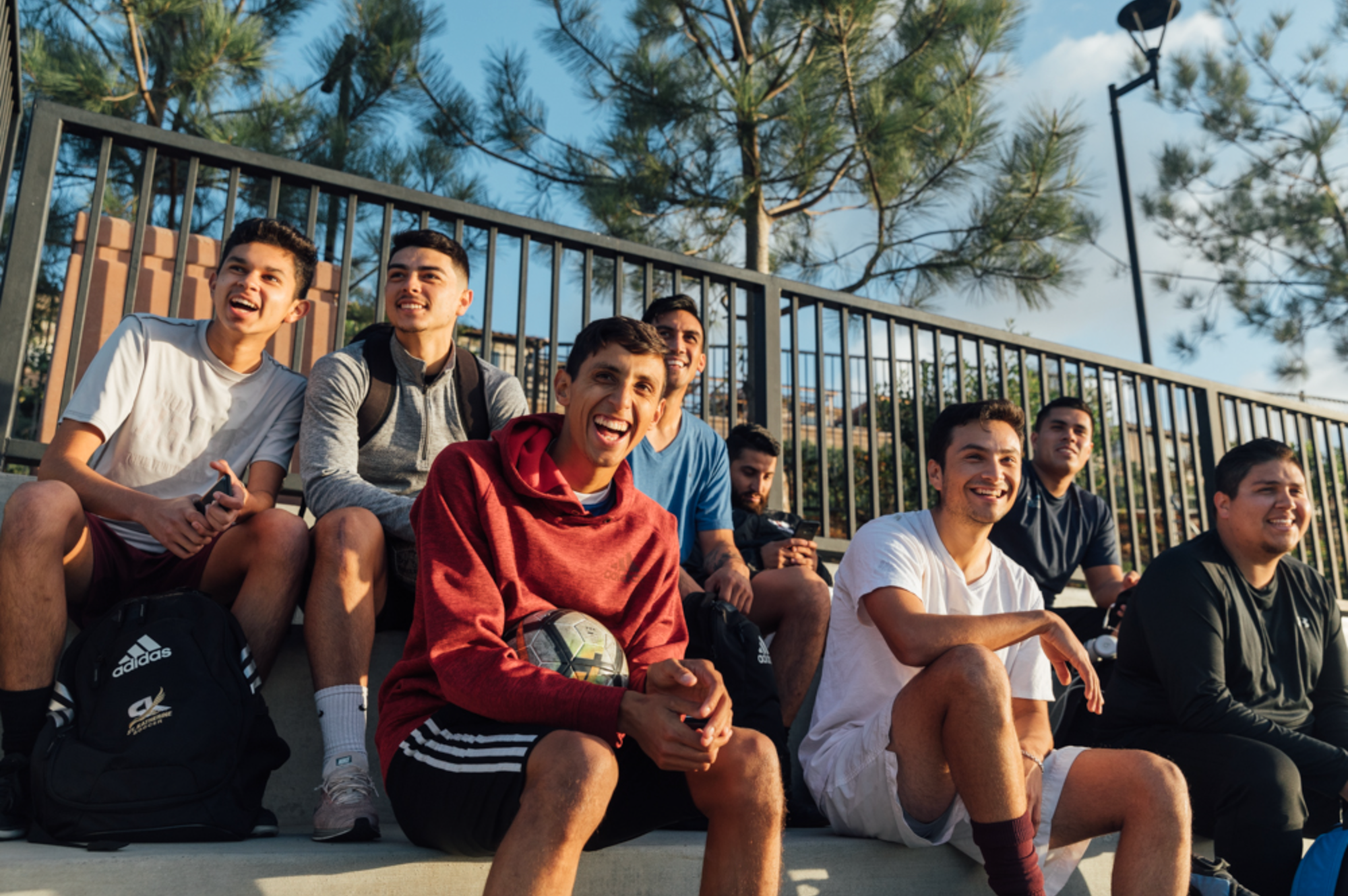 Home Topics Leadership & Business Leaving “Futprints” Inside and Outside the Classroom

When Alex Ramirez (19) stepped onto the soccer pitch at age 5 for the first time, he had no idea how much it would transform his life and the lives of those around him.

From playing semi-professionally to starting his nonprofit organization, soccer (or fútbol) has been the grounding force that connected Ramirez to people from all different backgrounds. And now, he participates in it with the goal of making a difference.

Ramirez says it was clear from the beginning that becoming a leader on the field was part of who he was.

“As a young kid, I always knew I was going to be a coach,” said Ramirez. “My dad tells me stories of when I was a little kid — 8 years old or 9 years old — I’m on the field telling kids what to do. And not in a way like, ‘I’m the best player on this team. You have to listen to me.’ My dad said it was always in a way like, ‘I’ll lift you up. I’ll take you with me.’”

This recognition led Ramirez to pursue soccer, hoping to become a professional player. But his goal was not without hardship. The cost of paying for tournament fees, equipment, jerseys, etc. took a toll.

“Behind the scenes, it was really hard for my family to pay for those fees,” said Ramirez. “We struggled. I was selling candy bars in front of the stores on the weekends.”

Amid this continual grind of working to become a professional soccer player, Ramirez wasn’t sure what his next educational step would be after high school.

“I wasn’t really out of the gate like, ‘I’m going to college,’” he said. “I kind of meandered my way through the community college world, not really knowing what I wanted to do.”

This period of finding his way also included a series of trips across the globe to Panama, Portugal, Sweden, Denmark, Spain, and Costa Rica, just to name a few.

Ramirez said that in those adventures, his “bubble” was popped and he experienced a new way of looking at his life and career.

When he came back, he realized that instead of pursuing a professional career, it was time to step into the inner calling he’d felt since he was a kid. And a talk with his dad ended up propelling him into the coaching realm.

“My dad called and said, ‘You know I don’t think this is working out for you. You’re not making any money. I think you should come back and focus on school.’ And that’s what I ended up doing,” Ramirez said.

The person that left and the person that came back were two completely different people. It opened my eyes to the world outside of our little bubble.

One day while listening to his favorite sports talk radio show, the Mighty 1090, an advertisement for PLNU’s adult degree completion program aired.

“Everything they said I was like, ‘That’s me,” said Ramirez. “I ended up inquiring and having a consultation.”

By the time he became a PLNU student, he had over 120 units completed through his years at community college which helped him get his bachelor’s in organizational management.

After PLNU, Ramirez continued to coach kids locally, and he became an instructional assistant for students with special education needs.

His experiences as a coach and teacher ultimately impacted how he’d find his true calling and create his nonprofit organization.

“As a coach, all of a sudden you see the other side of the coin,” he said. “You see all the families and kids you want on your team, and then you realize they don’t have the financial resources to pay, get extra training or private training. Once I walked through that door, it opened up a whole new perspective on kids like me whose families didn’t quite have the resources to be able to play.”

Another pivotal learning experience outside of the classroom made Ramirez think further about the sort of impact he wanted to make through soccer. Some of his friends he grew up playing soccer with came to him in their twenties and shared that his father had helped them make ends meet in paying for soccer fees, school supplies, etc.

“They said, ‘Hey, I just want to tell that your dad made such an impact on my life. If it wasn’t for him, I never would have played soccer and got into college,’” said Ramirez. “I literally almost cried. I was like, ‘Oh my gosh.’ It was mind-blowing. I think all of that culminated into like, ‘How can I use this platform that I love, and how can I positively impact the next generation?”

How can I use this platform that I love, and how can I positively impact the next generation?

One day, while getting a haircut and seeking a restart amid some tough times, Ramirez’s barber helped him answer this question.

“It was during the winter of 2019 and I’m sitting in his barber chair,” said Ramirez. “I’m ready to go to Oregon and clear my mind. He says to me, ‘I think you could do so much more with soccer. You’re not doing what you’re capable of doing in soccer.’ I was really kind of standoffish. He goes, ‘Have you ever thought of starting a nonprofit?’”

Although he hadn’t thought about going that route before, Ramirez immediately knew what he would name it: Leaving Futprints.

Ramirez got the non-profit approved on Jan. 17, 2020. And from the get-go, the energy and excitement about getting this going were driving its creation. However, like many other nonprofits and outreach organizations experienced, COVID-19 changed the game plan.

“I was on the cusp of creating a spring soccer league that ran from early March to April,” he said. “We had 16 different teams in different age groups. Going into that summer, based on the projections, we were going to bring in $10,000 to $15,000 dollars. And then, COVID-19 [happened]. Everything got completely shut down. We refunded everybody. It destroyed months of work and it was heart-wrenching.”

Although Leaving Futprints’ first event started with setbacks and delays, it has since bounced back, reaching its community through soccer camps, an annual golf tournament, and scholarships donated to the Vista soccer club.

The organization is dedicated to empowering children through guidance, mentors, and positive influences. Specifically, their outreach is targeted at helping kids who struggle financially or have disabilities.

Ramirez said this organization was the product of seeing and surviving through hardship in his life and watching others also pursue their dreams with resilience.

“With respect to helping the kids who struggled financially, I think the big one is because that one was me,” he said. “It’s like I’m looking in a mirror at these kids at myself when I begged my parents every season: ‘Can I please try out for the competitive team?’ The answer was no so many years in a row. I knew why it was no but I begged and begged. The financial part of it, I see myself in those kids.”

With regards to programming for students with disabilities, Ramirez’s time as an instructional assistant and also seeing the Vista soccer club’s disabled league led him to see the value and importance of supporting these students.

“Every Friday they’d meet up for an hour with a buddy and we’d just do an hour of soccer,” he said. “It was a way to close out my week every week. The kids’ recognition of who you are, the smiles, the high fives, no matter how tough that week was, that hour somehow filled my week. I was like, ‘Okay, I’m good.’”

These experiences have informed and paved the way for Ramirez and his nonprofit to also change the lives of others.

At the center of Ramirez’s work is not only instilling life lessons through coaching but also allowing students to teach and champion each other.

“Kindness is huge,” he said. “It’s something we need so much right now. Passing on those core values I have — commitment, community, integrity, respect — I’ll be honest, it doesn’t really happen at the young age; it happens with the high school kids. Whenever I have an older team, I give them opportunities to get their community service and internships with me during our summer camps. Be that big sister. Be that role model. They really get a sense of, ‘Wow, this feels good to show the next generation.’”

Ramirez’s story didn’t take the conventional route of high school to college to career, and he says that’s something he is proud of and wants to encourage others in.

“There’s so much more than just going to college and getting a job and picking your career,” said Ramirez. “There’s so much more to becoming a well-rounded person that contributes to society. Teaching these kids about giving back and other things you don’t learn in school is so valuable.”

Ramirez has since begun pursuing a teaching credential and hopes to ultimately make Leaving Futprints a free, after-school program for the Vista community in the future. On top of this, he serves as a head coach for the Cardiff Sockers and works for San Dieguito High School Academy.

Although his professional soccer dreams never panned out, he’s been a champion in exacting change in the Vista community by empowering the next generation to make their mark on the world.