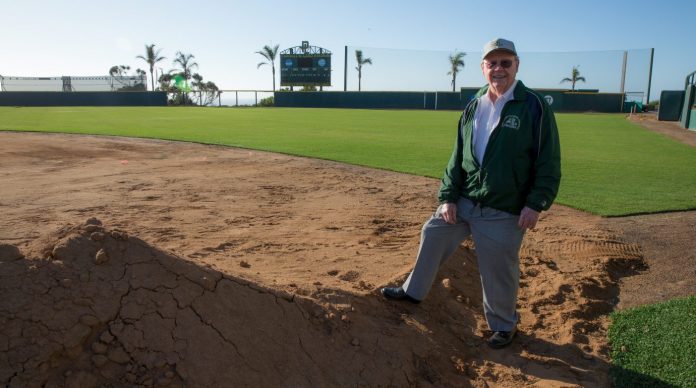 This summer, PLNU made “America’s Most Scenic Ballpark” even better.

The Carroll B. Land Stadium has long been lauded for its incredible view overlooking the Pacific Ocean, but recent improvements to the surface have garnered new pride for the field within the community—for professionalism and sustainability.

Within just a week of the final game of 2016, the 40-year-old turf around home plate and the 60-year-old outfield grass were removed. More than 50 truckloads and 1,300 cubic yards of soil were brought in to level the entire field. And after having teams play on its surface since the school moved from Pasadena to Point Loma, PLNU’s outfield—and somewhat newer infield—received new sod similar to that at Petco Park.

Carroll Land, the ballpark’s namesake and beloved former coach and athletic director, said the actual outfield playing surface has needed to be done for a
long, long time. He cited places where flooding had occurred during heavy rains, hampering practices or causing cancelled games. “That’s an exciting thing: to have the field back in pristine playing shape,” he said.

The sod isn’t the only professional upgrade; the mound is also being rebuilt to the standards of a major league baseball diamond. And the field turf behind home base was extended from the end of the dugouts to the end of the infield dirt on both sides, further improving the drainage of the field.

Athletic Director Ethan Hamilton is proud of the improvements. “When completed, the surface will be as nice as most college and professional fields,” he said.

But that isn’t the only reason for excitement; improvements to the field are estimated to save 500,000 gallons of water conservatively each year. Irrigation lines were rerun and improved, and the system controls are now completely digital, which allows for more specific watering patterns. They are even equipped with moisture sensors, allowing for optimum maintenance for the health of the grass, and decreasing water use by 20 percent.

Keeping with PLNU’s long-standing value of environmental stewardship, the infield sod was also repurposed around the west end of the track.

More work is still to be done before the team takes the field for the first time on Oct. 5, but Hamilton wants to make sure credit is given where credit is due.

“We are deeply appreciative for the support of the university and a variety of donors for these significant improvements, including the playing surface and new scoreboard,” he said. “I am also thankful for the great work done by Steven Riddle, our assistant athletic director for facilities and events, and his staff for overseeing the operation and for this top-notch facility improvement. I am con dent that 9-year baseball coach Joe Schaefer and his team will be even more excited and proud as ever to play in ‘America’s Most Scenic Ballpark.’”