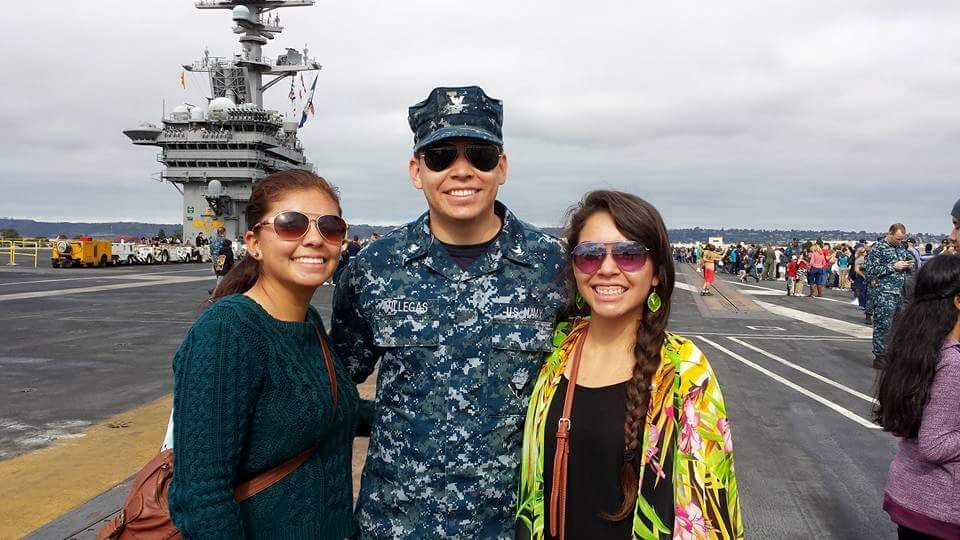 Home Topics Voices of PLNU Life After Service: Veterans Work Towards Their Degree

College is a milestone for many; it is typically a stepping stone for young adults transitioning into the next stage of life. For those who delay a secondary education, it can be intimidating to reenter the school system after so much time away from the classroom.

This is the case for many of PLNU’s veterans who honorably served their country and are now coming back to earn their degrees. Although Macarena Cardenaz, Aaron Villegas, and Doris Rubio each face unique challenges in pursuing their education, they are united by their military experience, their faith, and their commitment to complete their degrees at PLNU.

Macarena Cardenaz was a Staff Sgt. in the Army. She retired in 2016 after 20 years of service. While it is true many people have to find ways to balance their family life with the desire to obtain a secondary education, Cardenaz has had to cope with an even greater challenge. Her husband was also a soldier, killed in Kunar, Afghanistan, Feb. 20, 2010. During her time in the service, she had been working towards a degree, but all of that stopped when she became the sole guardian of their three children who were one, three, and five years old when it happened.

“The most difficult [point in my military career] was when I received the knock on my door — yes, it is just like in the movies. After seeing those two men in my door, I certainly knew that my life was about to change, that my girls would grow without a memory of their father.” She explained that this grief has not left her, “but my strength is that I need to continue for my daughters … I have kept his memory alive ever since.”

The Cardenaz family has made many sacrifices for their country.

The last few years of her military career had been a matter of simply getting through each day and taking care of her kids while adjusting to life as a single mother. When she left the Army, she became inspired to set goals for herself again. PLNU offered her hope, as a welcoming school that gave her a new community. Now, she is set to graduate in 2021 with a double major in nutrition and Spanish, as well as a minor in criminal justice.

She says that despite there being an age gap with many of her peers, “I love for them to teach me new technology and new trendy things … because my kids can communicate with me in the new way of a changing world. [It] also makes me more aware and ready for when it’s their turn to start with the college experience.”

Prioritizing the schedules of her children while navigating her own as a full-time student has not been easy, but she has found a great support system with all of her professors and the faculty who have helped to make things easier in any way they can. Cardenaz is looking forward to working within the community of San Diego after graduation as she continues a life of service even after her military commitment. Her faith and positivity act as a source of inspiration to those around her as she seeks to learn from and help to teach those she goes to school with.

There is a bond that develops among service members because of what they endure during their time in service, and it can sometimes be hard for anyone who has not gone through the same thing to understand. Aaron Villegas joined the Navy in 2013, serving as a nuclear mechanic. He was deployed twice during his four-year contract, undergoing long periods of time without sleep and extreme amounts of pressure that came with his demanding job.

“They are deciding who they want to be, but the veterans have to recreate themselves; we have to rebuild who we are.”

With plans to graduate in 2022 with a bachelor’s in physics and philosophy, he explains that after finding a space at PLNU’s Student Veterans Organization (SVO), where he is now the club president, he has been able to find community again. At times, he has felt a disconnect from the majority of students because, as he explains, “they are deciding who they want to be, but the veterans have to recreate themselves; we have to rebuild who we are. It’s a level of understanding, being able to listen to what they have to say and know we took different paths.” He believes that allowing everyone the space to tell their own stories showcases the intersection of so many incredible narratives across the campus.

Doris Rubio left the Marine Corps in 2017 and decided to pursue her degree as a full-time student. During her time at PLNU, she has made an impact on the community through her work as the vice president of the SVO. Rubio says, “The SVO helps bring us together” because, as she explains, there are a lot of similar challenges being faced for these service members coming back to school so much later than their peers. “I might have learned chemistry five years ago compared to a student that just graduated,” she adds. “I was stationed in Japan for two and a half years. I took classes on base, and it was different because I was working over 40 hours a week plus class. I had to stop school a lot of the time because of different operations, but I never gave up because I knew I had this mentality of wanting to go to medical school.”

Rubio distinguished herself during her service, earning the rank of Sgt.

She is now pursuing a Bachelor of Science in biology. “Being able to bring my science background and faith and merge it together is by far my favorite thing about the department,” she said. Being at PLNU has allowed Rubio to put her education first and focus on the direction she wants for her life. “I’ve hit walls before with being active duty but I want to inspire those who don’t think they can go to school because they are not following this traditional path … You can do it if you have the grit.”

These three students represent a growing population of veterans on campus who are striving to meet their educational goals. PLNU is committed to serving those who have served our country.

Related Article: More adults than ever before are heading to college to earn their degree. If getting your bachelor’s has been on your mind lately, here are some questions that can help you determine if now is the right time.