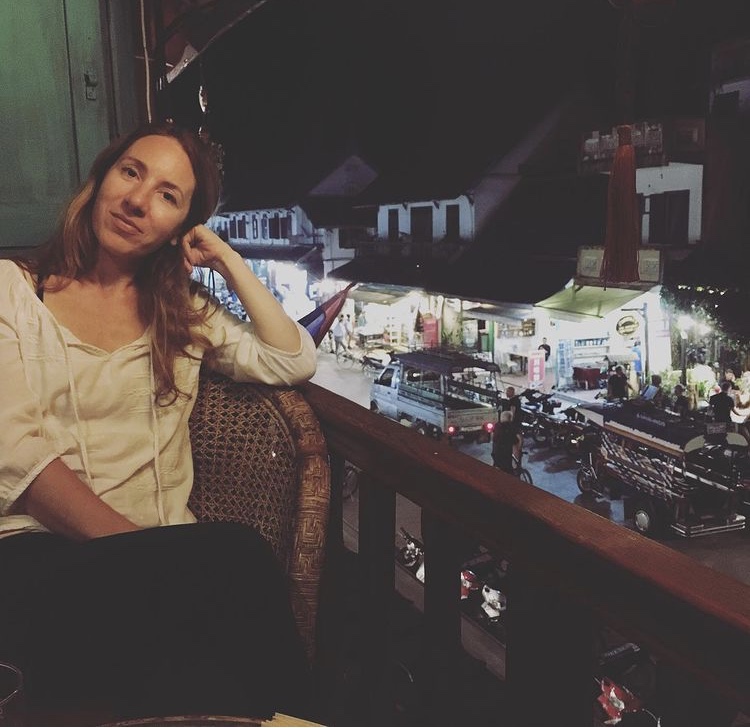 On a recent episode of the podcast “Talking Policy,” PLNU alum Lindsay Morgan (01) interviews a political scientist about why some countries are more war-prone than others. In another episode, she asks an expert about the psychological consequences of war and displacement.

Asking questions like these is part of Morgan’s work as the managing editor for the University of California think tank the Institute on Global Conflict and Cooperation (IGCC), where she is a podcast host and writer. Morgan is not new to questions of global policy and justice—she has been asking them since her undergraduate days at Point Loma, and as she lived and worked in countries throughout the world.

“The seed of my interest in global development came from when I was a little kid, being raised in a church that cares about the outside world, and participates in that world,” Morgan said. “I think of that core tenet of Wesleyan theology, this idea that we should participate in transformation. When we participate in the world, it also affects our own personal worlds.

After studying history at PLNU, Morgan earned her M.A. in politics at the University of Durham in the UK. She became interested in Middle East politics, but then returned to global poverty when she got a job at the Center for Global Development (CGD) in Washington, D.C. which “changed the trajectory of my career,” she said.

“It was a secular community, but people were deeply committed to transformation,” she said. “In the church we spiritualize that a lot, but at CGD, that’s not how they approach it, and it had a huge impact on me. From CGD, I ended up working in global development for 15 years.”

Through the next several years, Morgan lived in Tanzania while working for the World Bank, and worked in Afghanistan, Burundi, Indonesia, Kenya, Liberia, Malawi, Mozambique, South Sudan, Uganda, and Zambia. Living in Tanzania and traveling to countries in sub-Saharan Africa and Asia, she said, taught her “the importance of not making assumptions about other countries, other places, other people based on the small bit you might see when you are there. We tend to be really attentive to the complexities of our own lives and reduce other peoples’ lives. Over the years I learned, and continue to learn, that it’s a gift being part of each other’s lives, but at the same time, we should be very cautious about prescribing what is best for other people.”

Over the years I learned, and continue to learn, that it’s a gift being part of each other’s lives, but at the same time, we should be very cautious about prescribing what is best for other people.

For Morgan, talking to people and being curious about their lives is part of the process of communal and individual transformation. Over the course of her travels, Morgan has interviewed many dozens of healthcare workers, government ministers, people who work for aid organizations, and locals.

“We like to imagine that in poor faraway countries, there are saints and there are villains. But there aren’t. There are ordinary people, just like here. And each person I met was very brave in their own way, in what they were trying to do, often in very difficult circumstances.” she said.

Part of Morgan’s work at IGCC is hosting the podcast “Talking Policy,” which brings her love for interviewing and global policy together in a way that engages with audiences of many backgrounds. The demand for information on global conflict is growing, she said.

“Right now there are a number of phenomena that are converging globally,” Morgan said. “The rise of populist nationalism, climate change, countries where democracy is backsliding, migration, disinformation. I do think they will shape the future in ways we can predict and ways that we can’t. What we are trying to do as a global policy think tank is to help [people] who care about the world make sense of what’s happening.”

Morgan plans to continue to “translate” research through the podcast and writing to help people think critically about global issues.

“There are a lot of big challenges ahead, and I’m sure your [Gen Z] generation feels burdened by them, and I do too,” she said. “Our job is to figure out how, in these very difficult times, we can contribute to making both the wider global world and our small local worlds better.”