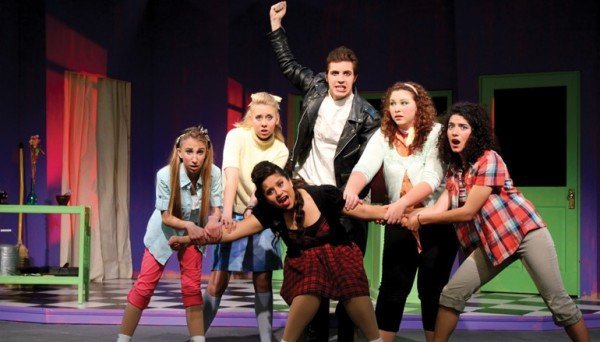 As a junior theatre major, I was beyond excited when I found out that we were doing Little Shop of Horrors as the musical for our 2012-13 season.  In addition to getting to act in this great show, I also served as publicity manager. I knew it would be a lot of work. Building sets, finding props and costumes, and accommodating the space for a musical takes time, but I also knew that it would be fun work. The set was bright, almost illogically so, and the music was silly. If we did question the brightly colored set, then the set designer, Brian Redfern, would say “It’s a musical!” and, for some reason, that made total sense to everyone.

For those not familiar with the play, Little Shop of Horrors is a musical comedy show about a florist working in the slums of Skid Row, Seymour Krelborn, who is lured by wealth, success, and getting the girl he idolizes by the man-eating plant, Audrey II, that promises him every desire of his heart. The musical is based on a black comedy film by the same name from 1960. Like Marlowe’s Doctor Faustus and Goethe’s Faust, Seymour must decide what his “soul” is worth. This very pertinent message is packaged in a wildly fun rock ‘n’ roll musical send-up of sci-fi B movies and some of our greatest fears—dentists, aliens, and romantic rejection. It tells a serious message about the corrosive nature of compromise on our souls.

Our version of the show ran from April 9-13 after several months of preparation.

I personally would say that I enjoyed the performances the most although it was bittersweet. We put so much time and work into this musical, and it really came out beautifully. I will say that the puppet of Audrey II, the man-eating plant, was another favorite. The actor inside, Luciano Gallegos, used his entire body to move the puppet. I think by the end of show week, he had lost almost 20 pounds because of how labor intensive the puppet was! It paid off though; there were times when we thought the plant was real.

The most challenging parts for me were the mechanics of my role. I was Chiffon, one of the sassy urchin Greek chorus girls who help narrate the story. There were five of us singing and dancing together, and we had to look completely uniform in our moves, which is a really tough thing to do when dance backgrounds vary. We also had three-part harmonies and sang in almost every musical number. I remember that in both the dance and vocal rehearsals, we had to focus on being a unit rather than soloists while each giving the energy of a soloist. It really tested our abilities to listen to each other and be independent simultaneously.

Being in Little Shop of Horrors was a growing and stretching experience for me. Dr. Ronda Rice Winderl is an amazing director, and every time I work with her, I learn something new about myself as an actor. In Little Shop, I really learned that you can only go as far as you let yourself. If you’re shy about dancing or singing a solo and won’t give yourself the freedom to try, then you’ll never be better than before.

In addition to all the hard work, we also had a lot of laughs. I think one of my favorite moments was during a smaller vocal rehearsal where it was the five urchins and the two leads, played by Austin McKinley and Jené Johnson. We were rehearsing the big love song, “Suddenly, Seymour,” and at the end we all sing “He’s your man” (or “my man,” alternatively, for Jené). We got to the end of the song, and everyone sang the right lyrics, except Austin, who sang “He’s your friend.” We all laughed really hard because it had completely changed the tone of the love song. I remember Jené looked at Austin (in character) and said, “Seymour … I’ve been receiving a lot of mixed signals from you if we’re just friends.”

Another thing that had the cast almost in tears the first couple of times it happened was when one of the actors, Nick Clarke, wore drag on stage (twice as two separate female characters). He was in full makeup, heels, dress, and a wig (for the first character, he even wore a pregnant belly). For a while, no one could get through the second number in the show without giggling because it was so unusual to see our friend wearing a dress and heels

The entire cast was very supportive of each other, which was a blessing to all of us. We’d start every rehearsal and show with prayer, including praises we had and prayer requests. People always say that your cast is your family and it sounds cliché, but it’s very true. We all made our own weird family on Skid Row.

Alyssa Salter has performed in Much Ado About Nothing and Eleemosynary at PLNU and has stage-managed Doubt, All I Really Need To Know I Learned In Kindergarten, and Eurydice. She also performs other duties in the theatre such as serving on stage crew, as house manager, in the box office, and as publicity director. As for her future career, acting professionally is the ideal goal. She would also like to earn her Ph.D. and teach at a university, following in the footsteps of her mentor, Dr. Ronda Winderl.