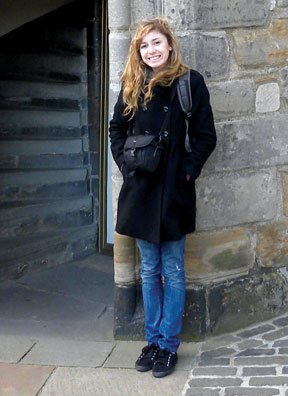 As I sat in Café Nero off High Kensington in London, sipping my mocha and letting my eyes wander over the pages of Hamlet, I couldn’t help listening to the conversations of those around me. Hearing their distinct British accents made their words so captivating. I watched them, interested and curious about their mannerisms, how they drank their coffee or tea, and what kinds of thoughts they had. The rain rhythmically dropped outside as we sat in the warm and cozy coffee shop. Though the weather was nothing new to them, to me, it was a beautiful-sounding backdrop to their musical voices. I stayed there all afternoon, listening as a foreigner, and it was one of the most pleasant moments during my semester abroad in London.

I was one of 20 students to travel on the PLNU London Study Abroad trip in the fall of 2010. Led by professors and spouses Drs. Ronda and Carl Winderl, the trip lasted four months, beginning Aug. 1 and ending Nov. 17. I was a junior at PLNU, and I had never been outside of the United States. Before my flight across the pond, I remember sitting in the airport in New York, hands clasped, waiting nervously for the plane. Though I knew a few of the other students going on the trip, I wasn’t really good friends with any of them at that point. I knew that going to London meant going without a worldly safety net, without my close friends and family for support, and I knew with all of my being that who I was, my character, and my perspective, was about to drastically change.

When I stepped out of the taxi and up the cement stairs to Lee Abbey, a Christian hostel in Kensington and my home for the next two months, I was welcomed with smiles and an overall warmness. The nervousness subsided as I saw where I was going to be living, and it was soon replaced with excitement. Settling in to my bedroom was a breeze, and I could definitely get used to having my classes only a few rooms away in the same building. We all had a moment to breathe and take it all in, and then it began.

Almost every week was packed with events: plays, castle-viewings, museum outings, and long weekends to explore the city and travel on my own. We spent 10 days touring the United Kingdom, visiting Shakespeare’s home in Stratford-Upon-Avon, the Beatles’ stomping ground in Liverpool, and a weekend in Canterbury learning all about Chaucer’s Tales. Ronda and Carl even planned a few out-of-country travels for our group. We went to Paris, France, for a weekend and spent some time at a beautiful village in Wales as well. In the middle of all our traveling, we also moved to The Highbury Centre in Islington for the last two months of studying abroad.

It seemed as though we were always running to catch a train, or a bus, or the tube to get to the many adventures that lay ahead. The 15 units of coursework I was taking barely, and surprisingly, fit in to my hectic and exciting schedule. One class in particular focused solely on British culture, which allowed me to complete assignments by talking to locals on the streets of London. Another was entitled “Theatre and Drama in Great Britain,” and it was the reason I had the opportunity to attend more than 30 theater productions while I was there. One production was especially beautiful; it was held on the outskirts of London, and the entire play was performed in the forests and rolling hills of Regent Park. Our group and the other audience members followed the actors and actresses of a Midsummer’s Night Dream as they chased each other all over the area. I was immersed in the brilliant arts and culture of London, and I soon found the creativity within myself inspired and beckoned forth. My desires to create, act, and write came to fruition during my experience in London. Who I was and what my talents were became questions that began to blossom within me. I desired to come to at least some sort of idea about my place in the world. Without a close support system, however, and in a place far from home, those questions often turned into doubts.

On many weekends when nothing was planned, the constant movement of the group slowed down, and I was able to focus on the strong changes happening to me. To learn and listen to the voice inside of me, a voice I trusted as truth, I needed time to explore London on my own. It was during these moments that I grew the most. I allowed myself to feel alone in a place I didn’t know, with nothing to fall back on but my trust in truth, in love, in God.

I remember walking the busy streets of London at night, passing by the fast lights of signals and cars. It was almost winter. Though I wore a large black coat and gloves, I could still feel the cold all over my body. Teeth chattering, I rushed to get out of it, to the warmth I could already see of Westminster Abbey. Through an open door, the music from a free organ concert resonated from the church out into the night. I entered slowly and took off my coat to sit among many others, quietly joining them in listening. People from all walks of life and areas of London surrounded me, taking in the harsh melodies. I sat alone in a crowded room, a foreigner, observing and listening to the sounds of truth and meaning. The complexities of the instrument filled the room with a startling beauty, a particular kind of beauty that only comes through such severities.

Looking back on it now, it feels as though it all happened so fast, and yet was simultaneously structured with so much meaning. It’s almost as if I was rushing through a tunnel of challenges and continual moments of growth, reluctant and determined at the same time, to get to a stronger, lighter place. Questions of identity, purpose, life, and what it means to love all sprang up around me, and I walked through them. My time in London was a challenging journey full of moments of change, difficulty, and inspiration that synchronized into a complex arrangement of meaningful pieces, which formed a beautiful and distinct period of my life.