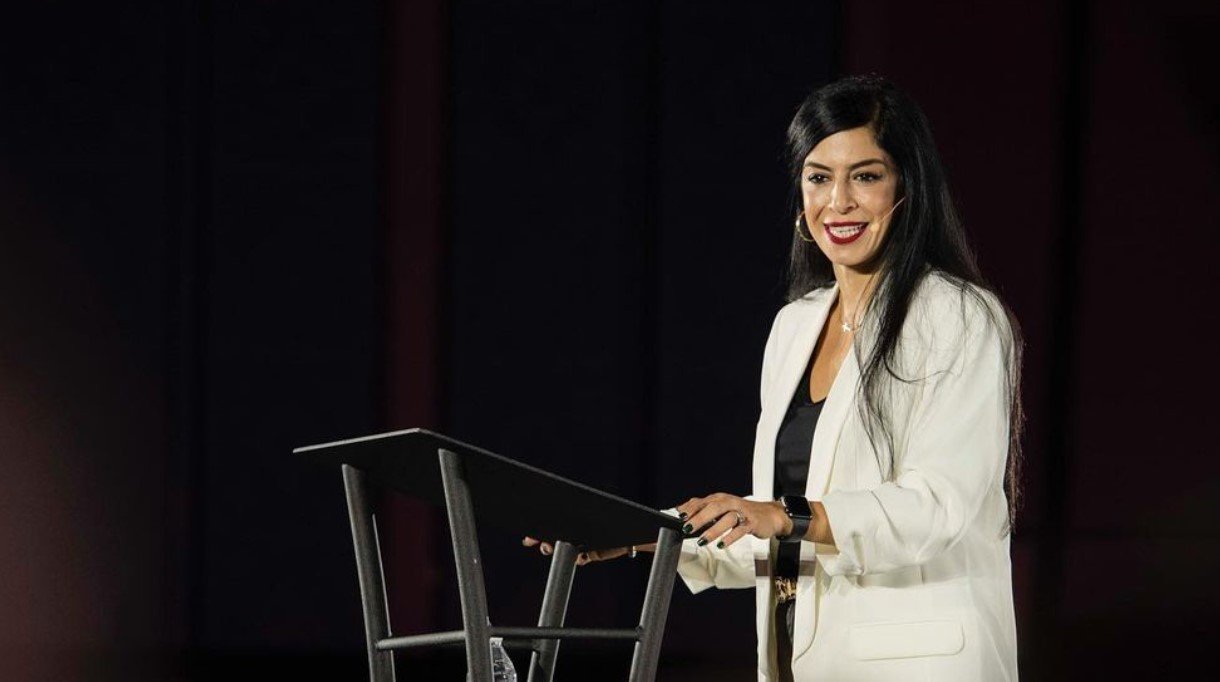 As an Arab-American growing up in San Francisco, California, Luma Haddad (00) struggled at first to discover her identity.

“I was an Arab-American student trying to figure out where I fit in,” she said. “I was too Arabic for my school experience in San Francisco but I was also rooted in the Arab culture, food, music, tradition, and church.”

Her parents had moved from Jordan, a country in the Middle East, and raised Haddad with Orthodox Christian values.

At the age of 14, Haddad was invited to attend a Nazarene church, and it was there that she discovered a new way of relating to God.

“I discovered that Jesus had died for me personally and wanted a relationship with me,” Haddad said. “It was in that discovery where I began my journey of asking questions and digging into the Scriptures to learn more about the Savior named Jesus.”

As an avid participant in the church youth group, Haddad grew in her faith as she received mentorship from pastors.

“It was through being discipled by my youth pastors that I really understood what it meant to walk with Jesus and have a relationship with Him,” she said.

Haddad first visited Point Loma Nazarene University (PLNU) when she was 15 years old as a part of an urban youth group trip for a conference. During that trip, she received a special calling from God to pursue ministry.

“It was through being discipled by my youth pastors that I really understood what it meant to walk with Jesus and have a relationship with Him.”

“I heard the Spirit of God at a young age pretty much tell me that I was going to be working with youth for the rest of my life,” Haddad said. “I was still a youth at that moment, but it felt like a very clear calling.”

She began to consider attending PLNU after graduating high school, but soon enough plans changed as her family decided to move back to Jordan.

“God dropped a big surprise on us,” Haddad said. “We ended up moving back to Jordan my senior year of high school.”

The year Haddad spent in Jordan was difficult at first because she felt like she would be missing out on the high school experiences American teenagers typically have. When her dad first told her they were moving, Haddad said she didn’t even know where Jordan was.

“I thought Jordan was like in the Midwest,” Haddad said.

On the plane ride over, Haddad took a moment to read her Bible and pray about the big move.

“I was really crushed about leaving my senior year,” she said. “But I was reading the Scripture that says that when you leave things behind for Jesus, He will bless you a hundredfold. I decided to trust that Jesus had a plan and had something in store for me.”

In Jordan, she ended up attending a private high school for Arabs and Arab-Americans of both Christian and Muslim backgrounds.

In school, students were offered religion electives in Christianity or Islam. “All the Christians went to Christian class and all the Muslims went to Islamic class,” Haddad said. It was in one of these classes that Haddad got the opportunity to live out the calling that God had placed upon her life.

“I had started building a relationship with so many students on campus and a lot of my friends were Muslim,” she said. “They would often sneak into my Christian class.” Haddad said that the students were very rowdy and overwhelmed the teacher, so she decided to offer help teaching the class.

“I was so excited and passionate about my discovery of my faith that I wanted to help,” Haddad said. “She let me teach every Friday for the rest of the year.”

Soon, other students found out about the class and began attending. “I started to have really deep and meaningful conversations about faith and Jesus with my Muslim and Orthodox classmates,” Haddad said. “I knew that this was God’s calling manifesting before my eyes.”

Despite these impactful moments, Haddad still struggled with her identity as an Arab-American even while living in Jordan.

“I felt like when I got there, I was too American to fit in,” she said. “Once again, I was struggling to find my identity.”

That struggle followed her to PLNU where she began her college career as a broadcast journalism major. Haddad said it was challenging to navigate a space with a predominantly white student body.

“I was a dark-headed, olive-skinned girl trying to figure out where I fit in on campus,” she said. “When you’re the minority, you kind of look for people of your minority group, so I was like, ‘Is anybody else out there?’”

Haddad said that despite the challenges, she decided to make the best out of her experience.

“Because of my personality, I jumped right in and tried to figure out how to be a bridge where I was,” she said.

Despite being the only person of color in her hall, she saw it as an opportunity to share her background with her friends.

“I became really good friends with the girls in my hall and was able to share some of my perspective as an urban, international youth,” Haddad said. “I was also able to share my experience with roommates, classmates and professors.”

Haddad said that at PLNU she realized that being different was what would allow her to make the most impact.

“I realized I’m not really made to fit into this world,” she said.

Haddad still considers representation to be important, but she finds comfort in her identity in Christ.

“My identity has to be in Christ, so where I go I can still be me and I can still celebrate my heritage, bringing all of who I am into every single room,” she said.

Haddad’s time at PLNU afforded her the opportunity to pursue ministry in significant ways. She was involved with the juvenile hall and prison ministries in the first few years of school. “I kept asking God to open a door for me to work with youth because I knew that he had placed that calling,” Haddad said. “As I was going into juvenile hall, my heart was breaking over these students.”

Soon she got recruited as a volunteer into Young Life, the largest youth organization in the United States with chapters in over 104 countries. The ministry began in 1940 with the vision to reach youth on their school campuses.

Haddad began renting out vans PLNU provided for ministry and would travel to San Ysidro where she’d host Young Life Club at a youth center near the Mexico border. The experience made an impact in Haddad’s life, offering her a new perspective on ministry.

“It blew me away,” she said. “For one hour a week, these kids could laugh and experience love and safety and hear the gospel. Our mission at Young Life is to earn the right to be heard and meet kids where they’re at and those two things I hadn’t experienced in church growing up.”

Since then, she’s been a part of the Young Life staff and now works as a Young Life South Bay director in that same community. Many of the Young Life teenagers that she mentored are now adults and serving as volunteers and leaders in the organization.

“So many of the kids that I met while I was at PLNU are married with kids now,” she said. “It’s been a really beautiful full circle to watch. Half of our leadership team are kids from the neighborhood who had a Young Life experience that changed their lives, so they came back to serve.”

As a Young Life director, Haddad continues to mentor urban youth from marginalized communities, ensuring that they are plugged into churches, receive support, and attend Young Life camps.

“We take students to winter and summer camp, which gives them an incredible experience,” she said. “They are able to experience the love of Christ through Young Life leaders who go to camp with them and then also go home and journey with them.”

“Young Life Club invites the students to a weekly event where they are provided with food, music, games, and a Gospel message,” she said. “We then invite them to attend the summer or winter camps.”

One of the most significant, yet challenging, aspects of Haddad’s job is fundraising. Originally, the Young Life fundraising model relied on assistance from parents since most Young Life clubs were in the suburbs.

“That is now not the case if you’re in an urban area,” Haddad said. “Those families cannot help support you financially, so I have to go outside of my area to fundraise.”

Haddad typically visits churches in Del Mar and La Jolla to raise funds for the ministry.

“If it wasn’t for their support, there is no way I’d still be here 20 years later,” she said.

The South Bay area now has about 40 volunteer leaders and several staff members. The ministry is able to provide support for their leaders that includes therapy, financial assistance, a sense of community, and a family.

“I think that a holistic spiritual view is what’s impactful in Young Life ministry,” she said. “It really is a family atmosphere, especially because a lot of these young former students don’t have a family model.”

Haddad said she is grateful for the volunteer leaders she gets to work with who often have to juggle jobs and other responsibilities in addition to the hours they put in at Young Life.

“They’re working through their own childhood trauma, and they have a social life,” she said. “On top of all that they seem to find time to be a part of discipling a teenager.”

“Youth are our future and if we don’t see the importance in mentoring them then the future is not going to look as bright as we’d like it to,” she said.

Looking back, Haddad said that if it weren’t for her multi-faceted background, she wouldn’t have been able to do all the important work that she does now.

“Youth are our future and if we don’t see the importance in mentoring them then the future is not going to look as bright as we’d like it to.”

She said that growing up in inner-city San Francisco, attending a majority-Muslim high school in Jordan and studying at a university with a predominantly white student body were key factors in her journey.

Haddad stresses that it’s important to invest in youth.

“I am working with inner-city youth, all my donors are white and Christian, and all my community is still Arab,” she said. “God used all three of those things to help build who I am today and who I’ve been the last 20 years so that I could effectively be a daughter of God, a sister in Christ, and a minister.”

Her advice to anyone who is struggling with their identity as a minority is to not be afraid to embrace one’s full self.

“Do not try to fit in,” Haddad said. “Bring all of who you are to the table and be proud of who you are in Christ. Be proud of your cultural heritage. We’re all image-bearers of God, but God is the one [who] has allowed us to come from different cultures and different countries, so let’s not dim who we are to fit in.”

On Life and Change with Sylvia Potter

Julius Obregón Jr. and the Search for Prayer