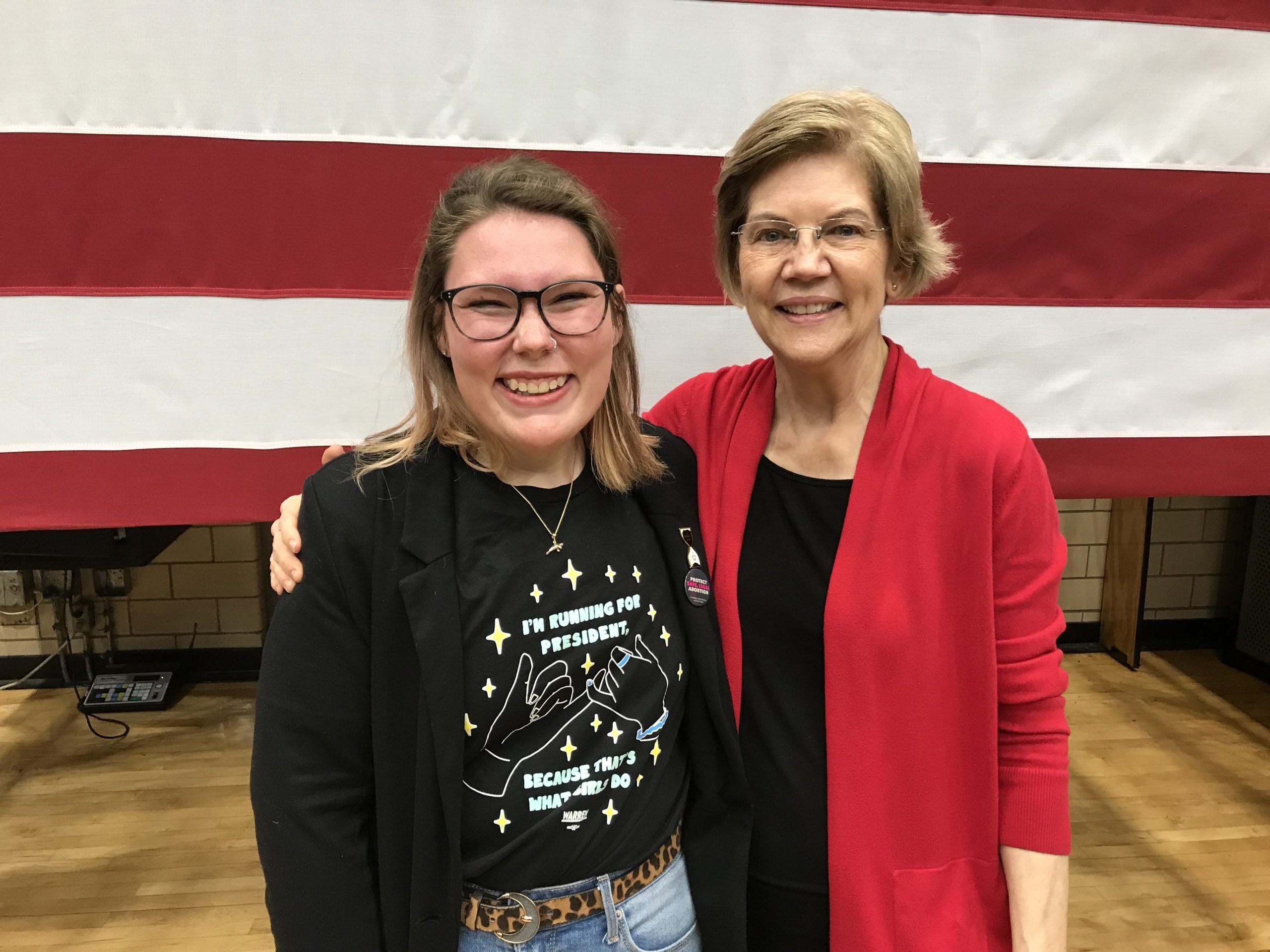 In response to what advice she’d give to young women today, Ruth Bader Ginsburg once said, “Fight for the things that you care about, but do it in a way that will lead others to join you.” This quote is what PLNU senior and political science major Maggie Valentine lives by. “I felt a calling to do something to make a difference,” Valentine says. And through her difference making, she aims to fight the good fight while uplifting others along the way.

Valentine is one of Point Loma Nazarene University’s 2021 Homecoming Rising Alumni Award winners for her resilience and continual fight for social justice. She has taken advantage of the opportunities that college offers with a myriad of internships and extracurriculars while maintaining good academic standing.

Her passion for politics came from a local 2016 election in her home state of Oklahoma, months before she was set to start college. The day after the election her high school US government teacher explained that the educational funding ballot measure they had been rallying for did not pass. “I saw the defeat that a lot of my teachers were experiencing,” Valentine said, having witnessed the teachers going door-to-door on weekends to campaign. “We really thought this measure was going to pass, and then it failed. And that was really a turning point for me.” This moved her to change her major from exercise science to political science so she can continue to fight for change within her community.

Valentine chose PLNU not only because her sister was already a freshman in Lomaland, but also for the university’s unique kayaking opportunity. (With a younger sister already committed to attend Point Loma in the fall and the youngest sibling set to follow suit, this won’t be your last time hearing about the Valentines.) Maggie started her college career attempting to juggle kayaking and participating on the debate team, but eventually chose the latter.

But debate isn’t her only extracurricular activity. Valentine also resurrected the College Democrats club and has helmed as president since her sophomore year. “I felt like something was missing,” she said. “It didn’t feel like there was a place for progressives to go on campus.” So, starting with two members, she has helped it grow to over 15 — including members still attending meetings via Zoom during remote learning. Now, there’s even underclassmen ready to take the reins after Valentine graduates in the spring: “It really gives me hope.”

She continued to explain how inspiring young people’s recent involvement in politics has impacted her. “Looking at the elections in 2016 and 2018, youth voter turnout was at an all-time low,” Valentine said. “Young people didn’t feel like they had a voice, so they didn’t go out and vote.” She compares this to the most recent Senate run-off in Georgia: “It was record numbers because young people feel like they have a voice now.” Valentine explains that it starts with having outlets on campuses so all people — regardless of party affiliation, regardless of level of knowledge of policy — can be educated and engage in fruitful discussions. “If people are able to learn more in a judgment-free space, form their own opinions, and have these conversations, they’d be able to find their voice on an issue.”

“If people are able to learn more in a judgment-free space, form their own opinions, and have these conversations, they’d be able to find their voice on an issue.”

With this passion for politics in tow, Valentine set to fill her semester abroad requirement in Washington, D.C. last spring. It was cut short due to COVID-19, but in the three months she was there, her experiences were able to solidify her goals. “The first week I was there, I was like this is where I’m meant to be,” she explained. “Going into the Capitol, I said ‘I want to be here.’” Witnessing the hustle and bustle of D.C. and suits swiftly walking through government buildings fueled her passions even more.

In combination with her enthusiasm for young people, the lack of representation of women in politics also intrigued her. Valentine minored in women’s studies and classes taught by Linda Beail, Ph.d., for example, made her question the status quo. “There are a lot of issues that women in politics face that people don’t really acknowledge,” Valentine said. “I think the best way to break them down is to support women who are doing what I want to do politically, and helping them.”

Before the 2020 election, Valentine landed an internship with the campaign of Sara Jacobs, a San Diego democratic candidate who ran for Congress. Valentine got to talk directly with voters during that October to November 3 sprint where she got to be a part of the community. She felt it was really important to get involved in her local politics and “to find people that represent what I want to see in the future.” Jacobs ended up winning the election and became the youngest person from California to serve in the House of Representatives. Valentine also served as an intern for Representative Ajay Pittman of Oklahoma’s 99th district during the 2018 election; she too became one of the youngest state-elected officials.

After graduation, Valentine will continue to empower young voices through the prestigious Teach for America program as a fellow. She plans to teach social studies in Tulsa, Oklahoma. “One of the paths that I was considering was teaching because it was my social studies teacher who got me into political science,” she said. Now she gets to return the favor by equipping America’s future voters and future leaders with the right tools to fight for things they care about. “Just as much as I am teaching my students,” she says about her future class, “my students have so many different experiences than I do and have just as much an ability to teach me.”

Valentine’s future career goals has her moving back to Washington, D.C. but this time to the White House. “My dream job is 100% being president,” she said. “And I want to have an all-female ticket, a female VP.” (Valentine 2036, anyone?)

But first, she says, she’d want to move back to her hometown after her Teach for America fellowship and run for office locally in Oklahoma’s House District 91. Within four years we could see Valentine on the ticket, fighting for change in her hometown, and going up against the incumbent: “I’m going to give him a run for his money.” RBG would be so proud.

“Service Above Self” — A Favorite Phrase of Alum Stephanie Perez