Home 2017 Spring Making a Musical: A Glimpse Into the Life of Hamilton Resident Director... 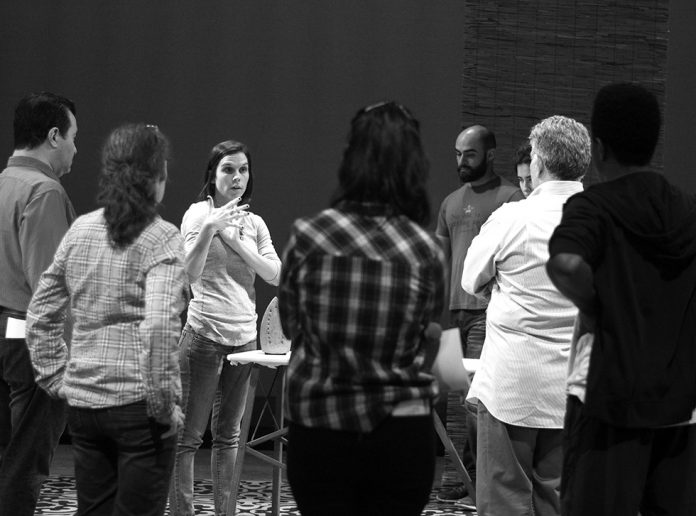 Morning light breaks. Before getting ready for the day, Hannah Ryan (08) makes her way to her computer, where she edits notes she took from the previous night’s performance of Hamilton: An American Musical. On the subway ride to the theatre, she reads scripts for other projects she is developing.

She arrives at the theatre for a “put-in” rehearsal, or dress rehearsal for new company members. The actors get into costume, after which she meets with them to go over dance lifts, turntable moves, or high-traffic staging moments. The actors take their places, and the show is run from start to finish. Ryan, along with the associate music director and choreographer, takes notes, paying close attention to details of spacing, lighting, character development, character relations, physicality, and story. The run-through is complete, and Ryan meets with the new actors for one-on-one reviews.

She grabs a quick dinner before making her way back to the theatre, where she checks in with the cast members as they prepare for the evening’s show, going over the notes she prepared that morning. She takes a seat to watch the evening’s performance, paying special attention to the actors in their debut. The curtain closes. Ryan heads home after another long, successful day.

While no two days are ever alike for Hannah Ryan, resident director of the Broadway hit Hamilton: An American Musical, this scene depicts what a typical day might look like. The setting for her fast-paced, New York-based career starkly contrasts that of her childhood, which took place on a farm in central Ohio. Ryan, who now travels all over the country helping manage the Tony- and Grammy-winning production, grew up watching her father harvest 500 acres of corn and soybeans, raising farm animals alongside her brothers, and showing sheep and calves at her local fair. It was actually this upbringing, one steeped in responsibility and hard work, that Ryan says helped her get where she is now.

Drawn to a different setting after her rural high school days, Ryan moved to San Diego, where she majored in theatre at PLNU. With a background in theatre from her grade school years, as well as a long history starring in Ryan family productions, she was initially drawn to acting. But, after a semester abroad in London with Drs. Carl and Ronda Winderl, her focus shifted.

“In London, we would read plays for class, discuss those plays by day, and then by night see the finest productions of those plays,” Ryan said. “There were three productions in particular that had a lasting effect on me for one common reason: they were all directed by fierce women. I changed my emphasis from acting to directing after that, hit the ground running, and to this day haven’t stopped.”

In addition to helping with PLNU productions, Ryan began working at a community theatre, starting as an assistant and working her way up to co-artistic director. After graduating, she interned at La Jolla Playhouse, where she worked on over a dozen productions; directed one of her original works; and connected with her mentor, Des McAnuff — best known for directing the musical Jersey Boys. According to Ryan, this pivotal connection is a prime example of how life in the theatre industry works.

“So much of theatre is networking and who you’ve worked with,” she said. “Staying connected and working hard are the most important things in this business. Your work ethic is your ongoing resume because it is a very small, very interconnected community.”

It was that hard-working reputation that landed Ryan her current role as resident director for Hamilton, a critically acclaimed musical that centers on the life of American founding father Alexander Hamilton. Ryan oversees the production in its permanent homes of Chicago and New York City, as well as its national tour, which will begin with long stints in San Francisco and Los Angeles in March. As the show continues to rise in popularity, recently winning the 2016 Pulitzer Prize for Drama, Ryan’s hard work and position are even more integral to the production and especially to the sustainment of the show’s artistic integrity — her primary focus.

“It’s important to allow the actors to make the show their own, but there are some facets of the production that cannot be changed or altered, like the text, the music, and design elements like lighting and costumes,” Ryan said. “I have to make sure they aren’t taking liberties with these areas, while also keeping the process as fresh as possible for the performers.”

Ryan’s multifaceted career comes with many challenges, among them long hours and an unpredictable schedule, but for her, these obstacles are far outweighed by the perks of the job.

“Absolutely nothing compares to the joy that comes from seeing actors in costume for the first time standing in the wing about to walk out on a Broadway stage for their debut,” Ryan shared. “I love that pep talk, looking in their eyes and saying: ‘You got this.’ When all the pieces finally come together, I get chills.”

When she’s not serving as teacher and mentor for the actors in Hamilton, Ryan is busy working on other projects, including collaborating with other artists as part of a creative catalyst called Nettleworks and developing her own theatrical pieces. In each of her artistic endeavors, Ryan has witnessed firsthand a performance’s ability to bridge the gap with the audience and speak into numerous personal experiences.

“Theatre explores both the grieving and healing process,” she said. “Through a performance, the audience can experience great freedom and a sense of relief that their story is being told. It exposes their pain and emotion and brings those things to life on stage. Hamilton, for example, represents the American story, and there is so much room within the piece for audiences to connect and empathize, feeling the story is their own. People watch the show and they see themselves on that stage no matter the color of their skin, their economic standing, or their social status.”

Recognizing the effect a performance can have on the lives of those watching, Ryan takes her part prepping the production very seriously. From aesthetics and timing to each actor’s level of comfort and proficiency with his or her part, Ryan stays dialed in to every detail, making sure each show is of the highest quality. Aware of the potential to sink into the minutia, she is thankful for the support system she has in her husband, Rick; the ever-present voice of her parents; and her faith — all working together to remind her what’s truly important.

“I attribute my upbringing for the understanding and constant reminder that the world is larger than me and my current circumstance,” she said. “That and my faith both ground me and provide much-needed perspective. The arts and theatre touch people in a way that no one person can, in a way that can only be attributed to the presence and power of the Divine. I feel incredibly blessed to get to play even a tiny part in that process.”