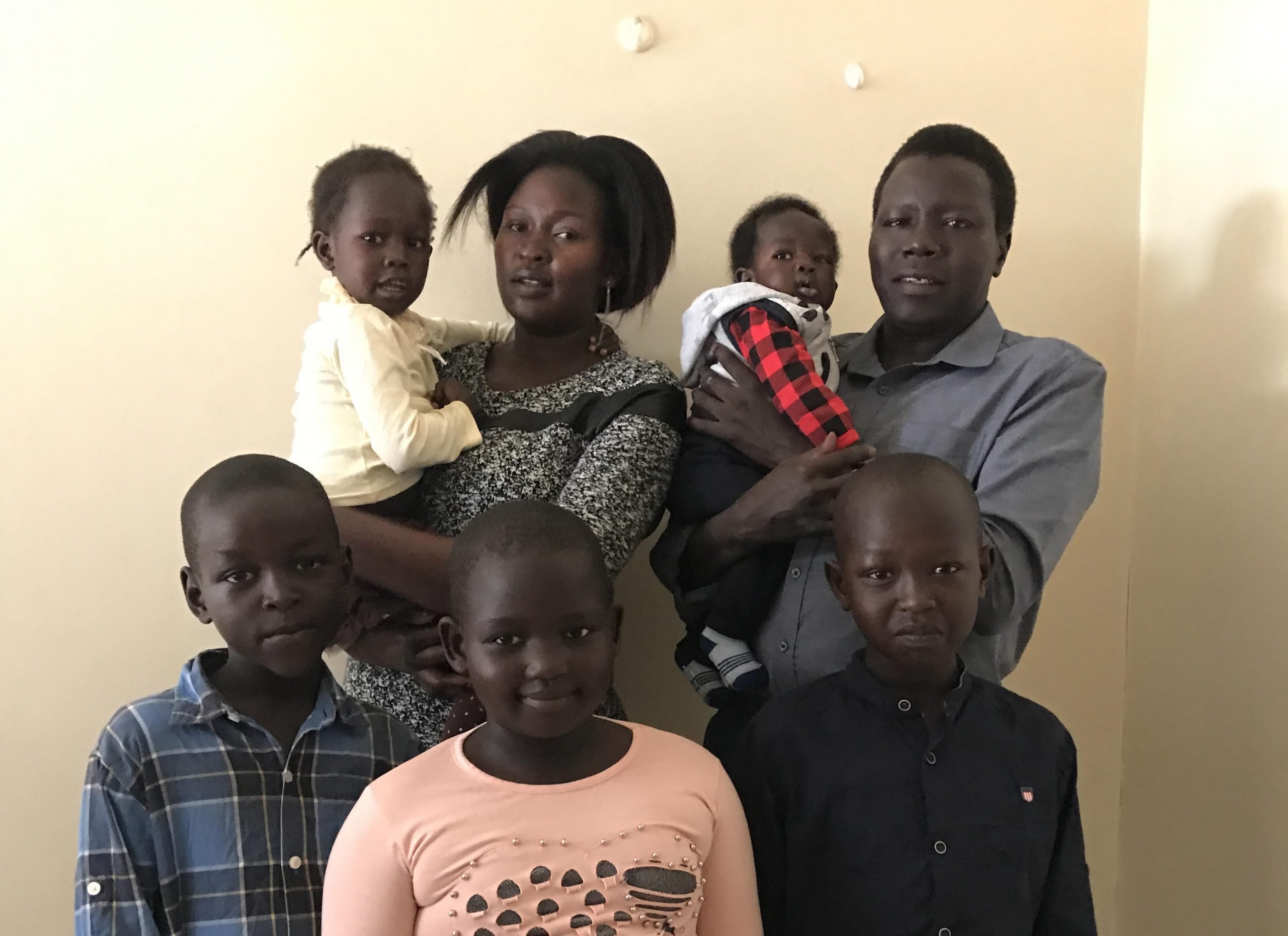 Mamer Ajak (07) arrived in the U.S. on March 13th, 2001 from the Kakuma Refugee Camp in Kenya. He was one of 100 boys known as the “Lost Boys of Sudan,” orphans due to conflict in the Sudan region.

He worked hard to learn English, complete his GED, and take care of his living expenses by serving as a dishwasher at Seaworld and warehouse receiver at Sears. Eventually, Karen Richards and her family connected him and a few other “Lost Boys” to Point Loma Nazarene University, where he eventually enrolled. Ajak graduated from PLNU in 2007, enabling him to reach his dream of acquiring a college education in order to help his people achieve peace in Sudan. After working for a few years in the U.S., he returned to South Sudan to help local communities through clean water initiatives, sustainable farming practices, and more.

Where are you currently living and working?

I have been living in Kenya since the war erupted in South Sudan in 2013. It has been hard getting a job in Kenya. My heart has always been with the people of Sudan who have suffered from protracted wars and geographical displacement. While I have been hoping that peace will return to the country and I will be able to go back to help, that has remained a wish. I keep praying for peace for the people of South Sudan.

What is the current situation in the Sudan region?

The situation in Sudan is still volatile, particularly in South Sudan where conflict has been raging for the last eight years. In 2005, Sudan reached a comprehensive peace agreement, which enabled the southern region of the country to vote on a referendum on whether to secede or remain part of the greater Sudan region. The vote occurred in 2010, and the southern region voted overwhelmingly to leave to become a sovereign state. In 2011, South Sudan became an independent country and the 193rd member of the United Nations.

However, another war erupted in 2013, which continues to rage. This war has changed everything I had hoped to achieve for the people of South Sudan. Most of the people have been displaced and it is hard to carry out activities within the country because of the levels of lawlessness, especially in the remote villages where many of these projects were originally implemented. Clean water projects and community peace initiatives were rapidly taking shape in various remote villages, but when conflict erupted most of these projects were either destroyed or became inaccessible to the rural population.

What is life like for the average member of these communities?

South Sudanese people have experienced war, displacement, and destitution more than they have peace. Most parts of the country have never had a single tarmac road, health facility, or school as well as other basic modern amenities. Due to the lack of road infrastructure and communication technologies, delivery to remote villages is especially difficult during the rainy season. In fact, 2019 brought a devastating rainy season, causing flooding that has displaced close to four million people. These people are now susceptible to hunger, diseases, and exposure to more conflict. But the people of South Sudan are very resilient people. They are still hopeful that peace will return to the country and still believe that their suffering is only temporary and will end soon.

South Sudanese people have experienced war, displacement, and destitution more than they have peace. But they are very resilient people. They are still hopeful that peace will return to the country and still believe that their suffering is only temporary and will end soon.

Can you explain the work you are doing with the AgSudan project in the Trans-Nzoia County of Kenya?

The AgSudan project’s goal is to connect youth and farming households with small-scale farming, allowing them to cooperate with each other as producers participate in domestic markets that can pull them out of poverty. South Sudan’s prolonged wars have negatively affected people’s traditional affinity to the land and there is a growing perception that agriculture is an unprofitable industry. AgSudan is striving to change such a mindset so that South Sudanese who live in poverty can adopt agriculture as their base to rebuild livelihoods.

AgSudan was established in 2007 as a pathway for improving food security and sustainable farming practices for households in southern Sudan. The farming initiative focuses on motivating roughly 1,500 rural youth and families to adopt market-oriented farming as well as income-generating and sustainable production.

In most sub-Saharan African countries small-scale agriculture supports 70 percent of the population through food, income, and employment. Therefore, it’s important to motivate youth and households to transition from producing for immediate consumption to producing for a larger market, which can generate higher levels of production, income, and employment. In certain parts of Kenya, for example, huge markets have been set up where farmers can trade directly or through cooperatives. This allows producers and farmers to sell within a market and gain purchasing power to use toward critical services related to health, education, and more. This allows producing families and individuals to more easily get out of poverty.

AgSudan was established in 2007 as a pathway for improving food security and sustainable farming practices for households in southern Sudan. The farming initiative focuses on motivating roughly 1,500 rural youth and families to adopt market-oriented farming as well as income-generating and sustainable production. In South Sudan, not only does this have the potential to increase income and employment, but also to reduce polarization among youth and their propensity toward conflict. This occurs by helping them adopt sustainable strategies like tractor plowing, improved seeding, post-harvest techniques, and so on.

What are some of the major challenges and barriers to the work you are doing?

There are many challenges. Poor roads are a major barrier because farmers are often unable to reach higher-price markets due to road inaccessibility and the high cost of transportation. Kenya is working to connect these various farming areas to urban centers.

However, our main challenge is acquiring funds to lease parcels of lands, buy improved seeds, and hire tractors for plowing in order to demonstrate to the community that farming can improve welfare if done sustainably. Currently, we are pooling our little financial resources to cover legal and documentation fees. In South Sudan, AgSudan would have been able to partner with UN agencies like WFP or UNFAO, but being a non-resident in Kenya makes it hard for these agencies to engage with us directly (this is because the funding they provide would be earmarked specifically for Kenya’s benefit as opposed to South Sudan’s).

How has your faith played a role in the work you’re doing?

Faith continues to play an important role in my life. I’m always hopeful that this current situation will pass like others that I have been through. God has always been my guiding light and He has made many things that looked impossible at the outset possible.

My PLNU network is an important global family that I cherish for their unrelenting love and support of my service-oriented work for the people of Sudan.

Faith has also kept communities together. In the case of South Sudan, faith has united people of different tribes and backgrounds to overcome deep political divides and work as one people of God.

What are some of the things you experienced or learned at PLNU that continue to help you with the work you’re doing today?

PLNU is not just my former university but a place I met a lot of people that are still important in my life today. Due to my relationship with PLNU, I have met people like Pastor John Calhoun, Esther Sprague, Pastor Barry Brown, Benson Brown, Bryan Kellerer, and many others. They helped me obtain an internship with the U.S. Senate. I interned for Senator Sam Brownback during the summer of 2004 and I helped congressional senior staff understand the issues in Sudan and prioritize their resolution. In 2005, a comprehensive peace agreement was reached, which led to the referendum and South Sudan’s secession. My relationships from PLNU also enabled me to get a job with Humanity United in San Francisco. Immediately after this, I was offered a job at Omidyar Network and worked with Dr. Randy Newcomb until 2009 when I returned to Sudan.

My PLNU network is an important global family that I cherish for their unrelenting love and support of my service-oriented work for the people of South Sudan.

Can you share a story of how your work has brought healing and wellness to a community?

The impact of my work before the war erupted was immense. In the Akobo area of the Jonglei State in South Sudan, clean drinking water was a major challenge to families and young girls couldn’t attend school because of needing to travel hours back and forth to fetch water from the river. While I was working with Pact South Sudan we were able to build boreholes with solar enabled submergible pumps. We also built a number of water tanks with a central container that could distribute water to different locations. This all not only provided clean drinking water but increased female enrollment in lower primary schools. It also improved the health of the community by reducing incidences of cholera, Kala-azar, and other water-borne diseases.

Is there anything else that you feel is important to share?

Many helping hands have been extended to me and it’s my hope to replicate the same to the communities I work with. The AgSudan farming project is an opportunity to cultivate the land using innovative and modern techniques that are easily adaptable and easy to use. I was lifted up by others and it’s my daily prayer to create opportunities for others in poverty to build sustainable livelihoods.

If you’d like to learn more about Mamer’s efforts or how you can support him in his work with South Sudan you can connect with him here.

Related Story: How a hike up Mt. Kilimanjaro paved the way for Plant With Purpose’s work in East Africa.