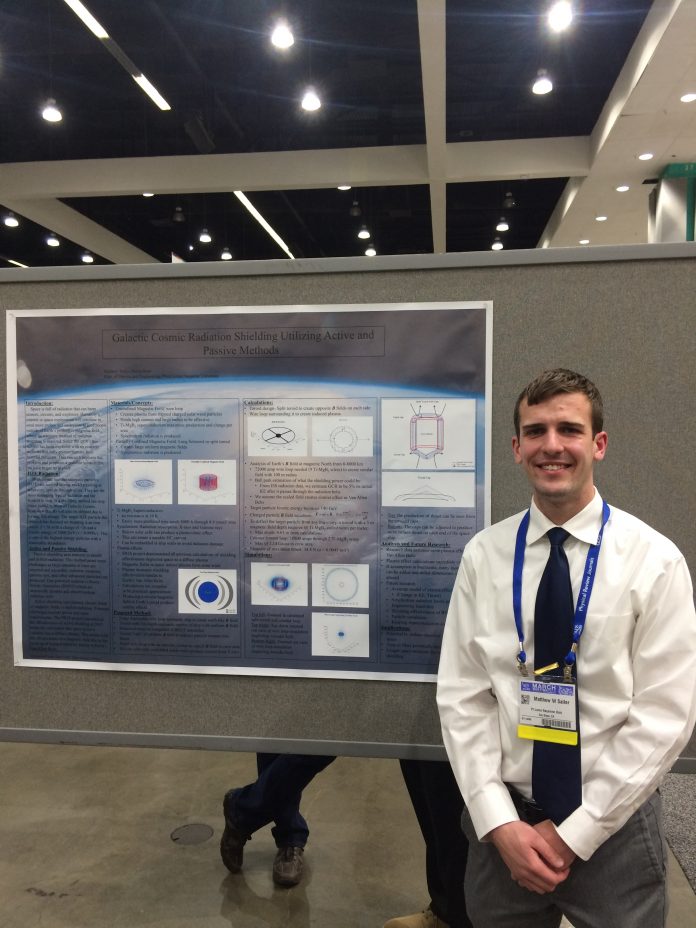 For every mission carried out by the U.S. Navy, there’s a guiding force, a team of climatologists helping to navigate conditions and ensure success. The Naval Meteorology and Oceanography Command (METOC) is behind the scenes studying the environment, providing critical knowledge that dictates the Navy’s every move.

A group smaller than the Navy SEALs, METOC is made up of only 350 weather officers and 1,200 enlisted personnel, and PLNU alum Matthew Sailer (18) is one of them.

Sailer serves METOC as Warfighting Support Climatology Lead and is currently ranked as a Lieutenant Junior Grade. In this role, he specializes in meteorology and oceanography, dealing primarily with the safety of ship and aircraft navigation. He creates weather briefs for pilots, informing them about heavy fog, rain, high winds, or ice at higher cruising ranges. He studies past trends of severe conditions like tropical cyclones to help ships plan their future missions safely. Together with his team, he analyzes the atmosphere and waves, evaluates data from satellites, and even deters threats through information warfare.

“I could not have asked for a better job,” Sailer said. “Every day is different and we often get lots of cool requests.”

These requests may come from particular entities within the Department of Defense to be used for a future exercise or operation. Working with numerous data sets, Sailer has been asked to write codes that manually create an average temperature and weather forecast for a specific time of year. He’s developed a standard index to determine if a particular time is good or bad for traveling by air or sea.

“We deal a lot with information warfare, intelligence, IT, and cryptology,” he explained. “This is in order for us to know more about the environment than the enemy does.”

According to METOC, if they can understand bad weather better than their adversaries, they can exploit those bad conditions. Sailer and his team use this information to aid officers with critical knowledge in any battlespace.

While he’s honored to be part of the METOC team, when Sailer first joined the Navy, he didn’t know he’d end up serving as a climatologist.

“I could not have asked for a better job. Every day is different and we often get lots of cool requests.”

Sailer had just graduated from Point Loma Nazarene University (PLNU) in San Diego, a city that’s home to the second largest U.S. naval base. As a junior and senior at PLNU, he joined the Navy’s month-long summer training program, an experience that prepared him for his future service.

For example, he had the opportunity to drive and stay on a submarine. He trained at Camp Pendleton, where he fought peers with pugil sticks in giant padded suits and was yelled at by Marines for a week. He was also teargassed and taught how to react appropriately in difficult circumstances.

At PLNU, he earned his bachelor’s degree in engineering and physics and graduated with honors, having completed a senior honor’s project on radiation shielding for spaceships using magnetic shields. This research, conducted alongside his professor and advisor Heidi Doss, Ph.D., was published in two scientific journals.

When he first joined the Navy, Sailer served as a pilot in training but soon realized it wasn’t what he wanted to do. He dreaded every flight. At the same time, he missed working in science. A fear of heights coupled with struggling to find enjoyment in the program ultimately led to his decision to drop out of flight school — a choice that didn’t come easily.

“It was stressful quitting flight school because they could have sent me anywhere,” he explained.

According to Sailer, if you ask to leave a particular program in the Navy, your request will be honored, but you could be moved to any division anywhere in the world. Sailer weighed the pros and cons; committing to eight years of flight school or risking placement in an unknown, unfamiliar area. He also sought the advice of his fiance’s father, an ex-pilot who had served in the military for over 20 years. Ultimately, he decided to prioritize his happiness.

“It was the hardest decision I had to make in my life,” Sailer shared. “Reflecting on it afterward, I think God was leading me in a different direction.”

“It was the hardest decision I had to make in my life. Reflecting on it afterward, I think God was leading me in a different direction.”

Since graduation, Sailer’s passion for physics had increased and he continued to study in his free time. When the Navy decided to place him in a community dealing directly with science and data, he was ecstatic.

His courage to choose a different path and follow his passion led him to a place where his love of physics could flourish.

A key benefit Sailer experiences in his role is the ability to continue expanding his education. Working among highly intellectual professionals, Sailer’s community is one of only a few within the Navy that require officers to attend graduate school in order to progress. Therefore, graduate school is built into their career track.

Sailer received his master’s degree in space studies and astronomy from the American Military University and is currently pursuing another master’s degree in astrophysics at John Moores University in Liverpool. After his final two years in the Navy, he intends to pursue his doctorate as well.

In addition, the Navy has opened up opportunities for Sailer to learn more about coding. Though not officially part of his job, he was able to teach himself how to code in Python, a high-level programming language. This skill has been extremely beneficial in his career and helpful to his team.

“No one else has taught themselves how to do that,” he said. “I felt a sense of pride and commitment to my country in that capacity.”

Sailer’s catalyst to learning Python came when his team received a confidential request to come up with a unique method of coding. Though he didn’t have a ton of resources, Sailer tried his hand at solving the problem. He devoted countless hours and long days, testing and rewriting, engaging in trial and error. In the end, he successfully created a product with an output that could be integrated into Google Earth.

“When I finished, I thought, ‘Wow, I can’t believe that worked!’” he exclaimed.

Sailer was awarded a medal for his work on the project, delivered to him personally by the commander of METOC. It holds significance for him not just as a recognition of success by his superiors, but as a celebration of his initiative to go above and beyond what’s required of him and serve his team.

“It meant a lot to me,” he shared. “I almost got teary-eyed. I worked really hard and long on it.”

The U.S. Navy’s core values are honor, courage, and commitment; Sailer’s dedication to these values is apparent in his service. He seeks to be a servant leader in all he does by embodying his commitment, positively impacting his country, and serving and honoring God.

“I strongly believe that the Navy is doing good work to protect America, shipping, and much more,” he said. “I believe in the goal and I put my heart and soul into my work.”

When he’s not solving key problems for the Navy, Sailer and his fiance, Jenny Cordoza (19), like to explore Monterey, go to the beach, and try out new restaurants. He’s thankful for his foundational time at PLNU, where his passion for science grew, where he formed friendships with other students just as driven to succeed, and where he met his fiance and proposed to her on the cliffs overlooking the Pacific Ocean.