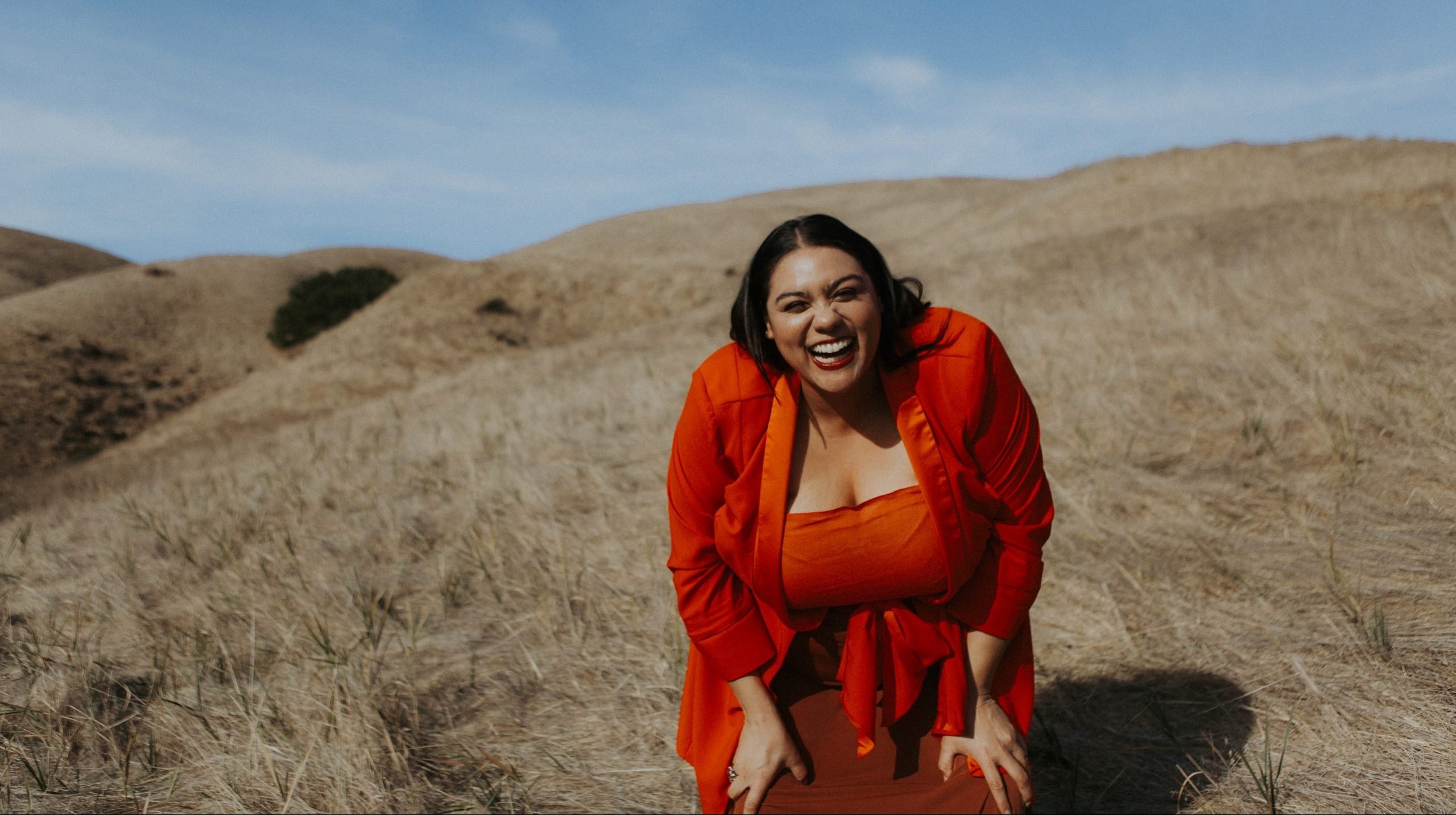 If there’s one thing Meaghan Maples (13) has learned in her journey as a singer-songwriter it’s that navigating the music industry with integrity takes a lot of work.

The music industry is known for often prioritizing image over relationships, but that has never deterred Maples from finding a way to stay true to her values.

“When it comes to music, you really have to do it for something bigger than just notoriety or wealth,” Maples said. “You have to do it because you can’t not do it.”

Through it all, there’s one thing that Maples prioritizes as she navigates her music career: care for others and care for self.

“I can’t not do music,” she said. “And if I’m going to do it for a living and live my life the way I want to, then I have to take care of myself and take care of people.”

From a young age she was exposed to a variety of musical styles and contexts, from singing gospel music at church to joining classical choirs, often singing in prestigious venues including San Francisco’s Davies Symphony Hall.

“When it comes to music, you really have to do it for something bigger than just notoriety or wealth. You have to do it because you can’t not do it.”

The Bay Area’s rich hip-hop history — home to renown rappers like E-40 and Too Short — inevitably made its way into Maples’ musical ecosystem as she began to sing with different hip-hop artists and often write the hooks on their songs.

“I was learning music by listening to music and studying the greats,” Maples said.

Maples’ deep and personal connection to music followed her to Point Loma Nazarene University (PLNU) where she began to sing regularly in the chapel band, interning with Worship Ministries under the leadership of George Williamson. When she wasn’t working on her academic coursework, she was diving deeper into her craft.

“I would study music on my own time because I knew that I loved it so much that I would do it no matter what,” Maples said.

Majoring in social work afforded her the opportunity to combine her love for music with her passion for serving marginalized communities, a passion developed in her by her father.

“My dad worked in transitional housing when I was a kid,” Maples said. “ I was always exposed to unjust systems and poverty so I’ve never been disoriented by populations that have less privilege.”

During her years at PLNU, Maples hosted arts and music programs in the City Heights neighborhood of San Diego and would often organize spoken word workshops for children in underprivileged communities.

“We were studying and dissecting Tupac and Biggie and all kinds of artists,” she said. “I was really digging in with these kids, helping them explore ideas, thoughts, feelings, and emotions through music.”

In addition to her work with music and social work, Maples built a nurturing and tight-knit community in San Diego, surrounding herself with friends who were also artists and musicians. She began writing songs and participating in PLNU’s summer ministry teams, leading worship at church summer camps all over the country.

When considering the next steps in her career, Maples was torn between focusing on her songwriting or her singing. It wasn’t until after she graduated that she truly found her voice and would go on to build a career combining both talents.

“I knew I could sing, but I hadn’t tapped into the depths of the voice that I use now,” Maples said. “I didn’t know it was powerful enough to make a whole career out of. I always thought I cared more about my songwriting ability, but it turns out both my voice and my songwriting are pretty valuable.”

Focusing on her singing, however, would require her to pay closer attention to marketing and image, something she wasn’t always comfortable with.

“Music is one of those things that I can’t stop doing because I love it so much,” she said. “But I think there was always this thing in me that wasn’t really excited about how people — women especially — brand themselves to be professional artists.”

As someone who deeply cared about relationships and social justice, she found it hard to connect with the more superficial aspects of the industry.

“To this day, running my Instagram, taking photos, and all the visual pieces of being an artist is my least favorite part,” she said. “But since I just had to do music, I knew I wanted to chase it down.”

After graduating PLNU, Maples went on to work with a variety of artists as a songwriter, lead singer, and background singer. Artists like Davie, the Blah Blah Blahs, Rend Collective, and Urban Rescue are some of the many credits she’s been able to add to her professional repertoire.

Despite these successes, there were more challenges ahead. In 2014, she moved to Los Angeles to pursue further opportunities in the industry. It turned out to be some of the most challenging years in her adult life.

“Part of it was that there was a lot of personal loss in my family because my grandparents and my uncle had passed away and I’d also gone through a breakup,” Maples said.

The other part was leaving behind the community she had built in San Diego and trading it for a city where building relationships became a challenge.

“I had this beautiful and flourishing environment of musicians and artists and support systems,” she said. “When I moved to L.A., I had to start fresh and that was difficult. But I knew I needed to grow and I knew I was getting too comfortable in San Diego and would probably always regret not going.”

In Los Angeles, Maples also had to navigate the deep sense of competition that exists in the artistic community.

“There’s this sense that there is not enough space for all of us [artists],” she said. “The mentality is that we can’t build each other up because if we do, then we might personally miss out on something. I wasn’t used to that, I came from a community where everybody was building everybody up.”

Despite the challenges, Maples pressed forward, working as hard as she could. She took up part-time jobs as a postpartum doula and a nanny, all the while singing background for other artists and writing songs on a freelance basis for television and film. Eventually, she was able to create a community for herself, meeting powerful women outside of the music industry who inspired her.

During her years in L.A., Maples developed what would become one of her most recognizable projects: Mama Haze. It’s a music project characterized by a bombastic, vibrant pop sound influenced by her soulful roots. The songs produced under this name would go on to be featured in prominent television shows and commercials.

After hustling hard for three years in L.A., Maples opted to return home to the Bay Area when she landed her very first song placement on television. Soon enough, Mama Haze songs made their way to Grey’s Anatomy and a Toyota Corolla commercial.

“I didn’t see the fruit of all that hard work in Los Angeles until I got back to the Bay Area,” Maples said.

Following the first few placements, she was brought on as an official artist for Zync, a “full-service music licensing and publishing company” that provides music for advertising, film, television, trailers, promos, and games. Some of Maples’ fellow artists on the Zync roster include the Alabama Shakes, Estelle, and Andrew Bird.

Maples now dedicates most of her time to writing and being featured on songs for television and film, working with brands like BMW, Target, Peloton, Starbucks, Google, and Uber Eats. Her songs have also been featured on HBO and BET.

Since the start of the COVID-19 pandemic, Maples said she’s been writing songs almost everyday and collaborates with other artists, including PLNU alumnus Jordan Frye, the front person for Urban Rescue. Zync also gives her the opportunity to work with artists and producers from around the world.

Recently, Maples found herself reminiscing about the times she would write songs with her friends in San Diego. After carving out songwriting sessions with her closest colleagues and collaborators, she released her latest project, On Your Side, a three-track EP launched under her own name.

The title track made it to NPR’s Tiny Desk Contest Top Shelf and was featured on Morning Edition, the station’s national morning show.

Despite being known more for her work as Mama Haze, Megan said she’s fine with not being as well known for the music under her name as it affords her the opportunity to continue to create without having to worry about the less enjoyable aspects of the industry.

“It’s funny: more people will hear my voice then probably will ever know my name,” she said. “I’m ok with that because the songs are everywhere.”

Throughout all her success, Maples said she’s never abandoned her values and her care for others. To this day, she chooses to mentor other artists and gives back in the same way she was given to.

Maples believes that an artist’s priority should be to focus on the craft rather than on fame and money.

“The industry is not designed for people to do well in easily,” she said. “So what are you going to do, worry about being famous and making money? Or are you going to focus on doing what you love and doing it well, honoring the people along the way?”

Maples’ advice for aspiring musicians and artists is to do art “wholeheartedly” and to surround oneself with mentors and individuals who speak into one’s life. She also stressed the importance of self-care and keeping healthy boundaries.

“As a woman of color, I’ve had to stick up for myself in a lot of situations,” she said. “The balance comes from surrounding myself with mentors and having people in my life that ground me. Focusing on wholehearted wellness is something I have to go back to throughout my life, so I can continue to feel like I can put my best self out there.”

Maples’ journey has been full of challenges as she has sought to navigate the more superficial aspects of the music industry, balancing them out with a dedication to her values and a passion for relationships. Ultimately, she chose to forge a new path, opting to dedicate herself wholeheartedly to her craft while also lifting up those around her.

“That’s what I want my life to be about,” she said. “I want my legacy to build up other artists and creatives behind me. That’s more important to me than any brand or level of success that I might acquire. Success will come and go and the money will come and go but it’s relationships that I feel have been the most treasured part of this whole journey of music.”

Meaghan Maples’ On Your Side EP is available on all streaming platforms. Follow her on social media at @hellomamahaze and @meaghanmaples.

Writer’s Symposium by the Sea — 2022: Writing That Provokes

“To those who had something to say, but couldn’t find the words.” — Dear Anybody but You