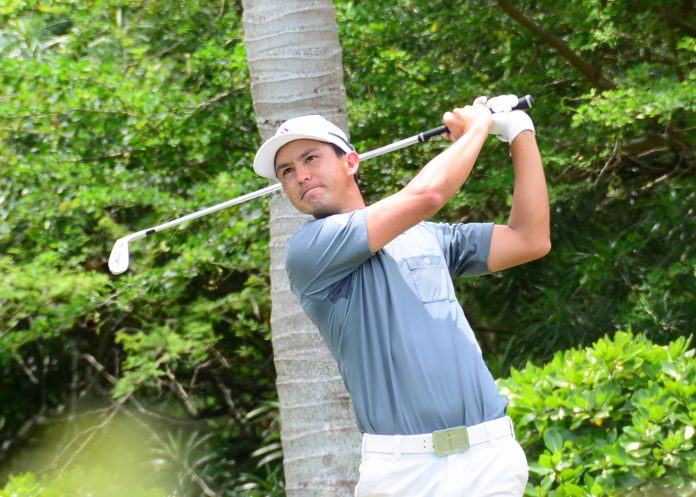 As Sam Cyr’s (09) bodyboard hit the cold water of the Pacific Ocean for the first time, he mentally noted to himself to buy a wetsuit. Since the Maui native and freshman student athlete had arrived on campus the adjustments had been numerous. Buy a wetsuit was added to a list that included things like take classes to learn mainland English and study harder than ever before. Additionally, the coach of the men’s golf team had encouraged this incoming freshmen class to redshirt.

But that was one thing Cyr had already checked off his list. He wasn’t going to redshirt.

His last year in Hawaii had been a standout. He had won the Maui Interscholastic League (MIL) individual boys golf championship while also leading his team to three MIL championships. Acceptance to Point Loma Nazarene University on a golf scholarship was just the icing on the cake for Cyr who already has his sights set on loftier goals.

“I had known for a while that I was going to play golf professionally,” said Cyr. “But in college it became more real.”

More real indeed. During his time at PLNU he earned twelve tournament wins, four All-American awards, and two NAIA national championships, not to mention signing deals with Adidas clothing and TaylorMade equipment. He prioritized building and maintaining relationships with these companies and graduated with his degree in business administration as well as multiple contracts in place.

Cyr would go on to have an incredible year in 2010, earning his first professional win in the Mid-Pacific Open and riding that success through 2013 as he climbed the Asian Tour’s Order of Merit. But the grass is not always greener, so to speak, and Cyr’s career was punctuated by significant health struggles even as he worked toward the PGA Tour.

The first thing he noticed was his massive drop in energy. Then came body aches, migraines, and weight loss. All of these initially seemed like the symptoms of mononucleosis (mono), but all the tests for mono came back negative. As the symptoms became worse and more frequent, Cyr started playing in fewer golf tournaments and going to more doctors, effectively putting his PGA Tour dreams on hold.

“I wasn’t playing golf tournaments, I had no income, and I was trying to get better,” said Cyr.

Cyr had dealt with a rare stomach bacteria on his first year of the Asian Tour, and had found treatment for that within the same year. But he knew that this second ailment was something completely different.

“It would never quite leave me,” said Cyr. “It was like being sick with the flu and never fully recovering.”

The next months were filled with endless doctor visits and multiple blood tests, which didn’t lead to any meaningful results. This was all new to Cyr, who had never gotten sick growing up. He recalls only missing school for important things like, well, a good surf day.

After months of dealing with the symptoms and ineffective treatments, Cyr went on the recommendations of friends and decided to look into Eastern medicine. Finally, in May 2018 he met his current doctor whose treatment plan provided him some relief.

“A lot of my other doctors were prescribing drugs and I just felt like those were all crutches,” said Cyr. “I wanted to get to the bottom of the problem and treat it so that I could fully recover.”

Ultimately, Cyr’s perseverance paid off. Now he is on a diet that includes intermittent fasting, herbs, acupuncture, and massage therapy to combat his headaches and body aches. Since beginning treatment he’s noticed a marked improvement in energy levels and has gained some of his weight back.

“The last five months have been a lot better,” explained Cyr. And he means that in more ways than one. As the physical pain took its toll, Cyr also felt lost mentally, emotionally, and spiritually.

“No one’s stoked on life when bad things are happening. Most of us aren’t sitting there praising God like Job. I wasn’t,” said Cyr.

Watch: From on the brink of death to proclaiming his faith in God, Jason David Sluyter (11) shares about his struggle with cancer and its effect on his faith at PLNU’s Chapel.

Despite all this he would be the first to say he never felt like he was abandoned or forgotten, even when he was traveling through Asia where Christianity is not popular and in some places not even allowed.

“My faith has meant the world to me and is a definite rock in my life,” said Cyr. “God never leaves or forsakes us and I’ve felt that even when my journey hasn’t looked like everyone else’s.”

Cyr’s journey has the unique tune of struggle to it that many of his close friends and fellow professional golfers haven’t experienced. The practical side of professional golf is that these players have to win to make money. Pro golfers like Cyr will often practice and train for months without winning money, and then place in a tournament and win anywhere from $1,000 to $250,000.

Earnings effectively cover their costs for the next few months of practicing and training, and allow them to pay off any loans they’ve taken on during the interim period between tournament wins. Unfortunately, this cycle requires consistency and for Cyr, the weeks, months, and years of misdiagnoses and physical weakness meant an extremely inconsistent paycheck.

And while Cyr is still dealing with the effects of that inconsistency, his energetic conversation and positive nature don’t seem diminished; something he attributes to the constant presence of God in his life.

“God always provides,” said Cyr. “I think people forget that it doesn’t always look the way we think it will but He always gets us through. You can’t spend time comparing your journey to others. I’ve learned that God doesn’t love them more than He loves me, He just has us walking down different paths.”

Although Cyr’s career has involved more struggle than many of his close friends and fellow professional golfers, he hasn’t lost his motivation to play on the PGA Tour, especially now that his health is back in a more consistent place.

“I’m in this till the end of the year at least,” said Cyr. “And I’m working hard on my game and I am seeing positive results with golf and with my health which is encouraging and makes me want to work harder.”

As far as regrets for the path he chose, Cyr said he has none.

“I definitely don’t regret the decision but it has not been the ride I imagined or pictured in any regard,” said Cyr decisively. “It’s been an interesting, tough, fun, great road but I would definitely use all those words.”

Related Article: From only baseball to God and baseball, read about PLNU alum and current Seattle Mariner Ryan Garcia’s (17) journey of playing baseball and finding God at PLNU.