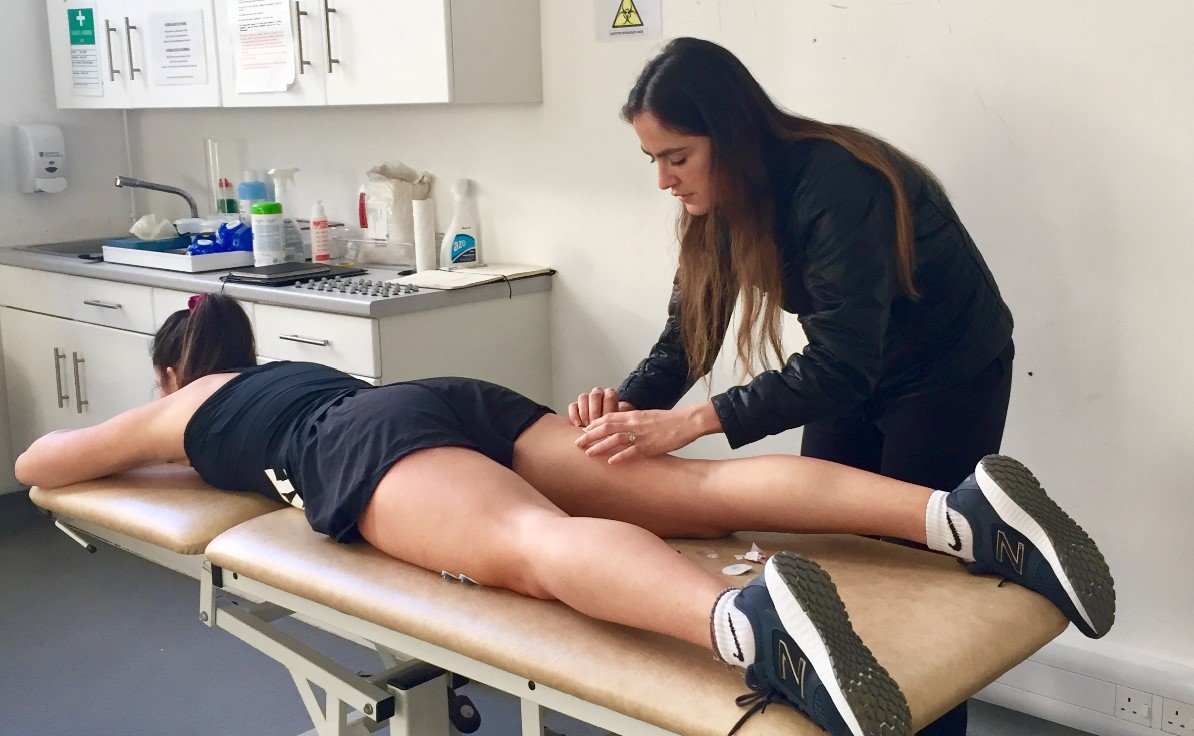 Home Topics STEM & Health Mending the Gap: How Sydney Dreves is pioneering in injury prevention as...

She would go on to be a part of many memorable moments during the Sea Lions’ seasons, including making it to the National Christian College Athletic Association (NCCAA) tournament in Florida and earning the sportsmanship award from her teammates before an injury forced her to cheer on her teammates from the sidelines. But after hanging up her cleats, so to speak, Dreves knew she wasn’t ready to leave the world of sports.

After so many years as a women’s soccer player, Dreves had seen first-hand the toll of injuries synonymous with competing at the highest levels of college athletics. And she was determined to do something about it.

“I remember it was the first day of training camp and within an hour two of our players both tore their ACLs,” said Dreves. “That experience first sparked my interest in ACL and injury prevention and I thought to myself, ‘there has to be a way to fix this.’”

Motivated by a desire to positively impact the individuals she played with every day, Dreves enrolled in the Master of Science in Kinesiology graduate program at PLNU to further her experience and education in the field. As she finished her studies and wrapped up her thesis work with graduate advisor Dr. Arnel Aguinaldo, Dreves thought she might stay local, find a job, and be near her family in Arcadia.

Cue a letter of admission and one full-ride scholarship to Abertay University in Scotland. Dreves had applied for the U.K-based doctoral program earlier in the year on the encouragement of family and friends, but had no expectations of receiving admission.

“I found the position [at Abertay] and saw that it was a fully funded program in the exact Ph.D. I wanted, and it was one of those moments where I was like ‘how is this even an option’ and I just applied for it,” said Dreves.

After receiving the acceptance letter and grant, Dreves was faced with a huge decision. The master’s graduate had finally finished her degree and knew she wanted to continue her studies, but a three-year program in another country was still a daunting prospect.

“I thought that maybe I’d study abroad or do my master’s on the East coast, but never really had the opportunity during my undergrad or master’s,” said Dreves. “But my family, friends, and fiance were encouraging me to do it … and that support is what gave me the confidence to say yes.”

So the Southern California native, who had never lived more than a few hours from home, packed her bags and flew to Dundee, Scotland to begin her program.

“I remember landing in Scotland, sitting down with my advisor, and feeling so intimidated because I had read his resume and I knew how crazy smart he was,” said Dreves. “And I remember having this moment where I was listening to him speak in a thick Scottish accent wondering the whole time, ‘is he speaking another language or is his accent just really thick?’ And then I remember thinking ‘Oh no what have I done.’”

The unsettling realizations and changes that come with an extended overseas move are enough to quell the most adventurous spirits, but if you ask Dreves’ master’s advisor, Dr. Aguinaldo, this was the perfect opportunity for her.

“She’s always had that outgoing, curious personality that I believe makes traveling and living abroad while getting your Ph.D. easier, so I encouraged her to be bold in this opportunity,” said Aguinaldo.

But that initial boldness would soon give way to other emotions when Dreves stepped into her first week of classes. She was the only female candidate in her cohort studying sports science from a biomechanics point of view. Additionally, her research centered on high level female athletes, which would prove difficult to find in the U.K.’s male-dominated sports scene.

Dreves decided then and there that she was unwaveringly determined to continue her research, and she now describes these initial challenges as only motivating her to continue down the path she had chosen.

“It’s driven my career goals,” said Dreves, now in her third year and getting ready to graduate from the program. “I want to lead by example and show other young women that even though it’s a male-dominated field, women are just as capable of conducting good research.”

Conducting good research and applying results to real situations is the cornerstone of Dreves’ approach to her program.

“While my career goals are still centered around going into academia, I still want to see my research used in real-life application even if it’s just consulting or speaking to coaches about simple things incorporated into a warmup or diet that can have a positive impact,” said Dreves.

Dreves will now work toward her goals of academia and inspiring the next generation of women in biomechanics back in Southern California as a full-time faculty with Chapman University, which is something Aguinaldo saw in her future from the beginning.

“When you see someone like her and the ways that she’s grown, I can envision her being a professor someday very soon,” said Aguinaldo. “And I think that she will be in a position to motivate future biomechanists, soccer players, and young athletes.”

For now Dreves is focusing on finishing her thesis which looks at the effects of fish oil supplements on exercise performance and injury prevention, taking one day at a time as her academic career comes to a close.

“It’s been such an amazing opportunity,” said Dreves, who has also been planning her wedding while living and studying abroad. “I believe that when you are uncomfortable and when you aren’t 100% confident in things that you also grow the most, and I’ve grown more in the last two years than I ever have before.”