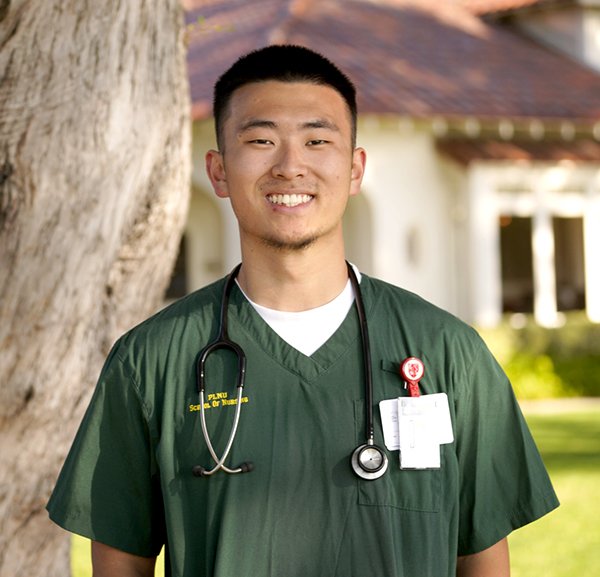 Minkyu Park could have given up. He could have given in. But he will graduate from PLNU debt free, ready to help inspire others to follow their dreams — no matter how impossible they may seem.

Park grew up in a low-income San Francisco community. Many youth from his hometown suffered from the negative effects of poverty and broken homes, and some fell in with drugs and gangs.

“My own family never had a stable income,” Park said. “My parents and I are immigrants from South Korea, and my parents were often times unemployed.”

Park attended public school, went to the after school program while his parents worked or looked for work, and never expected extras. His family didn’t go on vacations, rarely ate out, and didn’t shop for clothes often. They got by, but barely.

Despite her own struggles, Park’s mother always impressed upon him the importance of higher education. She expected Park to earn top grades, which he did, even while playing three sports through high school. Her words about education being the key to a better life stuck with him, even when his situation spiraled from challenging to nearly unbearable.

It was a very stressful time and definitely the hardest time of my life.

“My parents divorced during my junior year of high school, and my mother went back to South Korea,” Park said. “At first, I lived with my father, but the same challenges that led my mother to leave home also eventually left me homeless. It was a very stressful time and definitely the hardest time of my life.”

Though Park has since made efforts to reconcile with his father, at the time, he found himself completely lost and without support. After a stint of “couch-surfing,” during which he asked if he could stay over with various friends without divulging to them what he was going through, hope arrived. One of his friend’s mom’s realized that Park was in trouble and invited him to stay with their family for the rest of his senior year.

“If it weren’t for her compassion, I don’t know where I would be,” Park said.

Despite the hardships he had faced, Park wasn’t ready to give up on going to college.

“I was highly considering San Diego State’s nursing program, but I realized I wanted to attend PLNU because of the quality and reputation of the nursing program, the close-knit community, the relationships with faculty, and the faith-based education,” he said.

Park applied not only to the university but to every scholarship he could find. His dream was to become a nurse. Park was accepted to PLNU, received financial aid, and earned multiple scholarships. During his time at the university, he refined his nursing goals.

I realized I wanted to attend PLNU because of the quality and reputation of the nursing program, the close-knit community, the relationships with faculty, and the faith-based education

“I would like to be a school nurse towards the end of my nursing career after hopefully working in the emergency department or in psychiatric nursing,” he said. “As a school nurse, I can go back to my home community and have direct access to the kids. I want to be there for them.”

Throughout his time at PLNU, Park has stayed in close contact with the Office of Student Financial Services (SFS). He has been diligent in applying for scholarships and any kind of aid for which he might qualify. As a result, he is scheduled to graduate completely debt free even though he has been supporting himself completely on his own. In part to support the SFS office and in part to create more opportunities for students like himself, Park has traveled to Sacramento with PLNU financial aid officers to lobby for college student aid, especially at private universities.

He is scheduled to graduate completely debt free even though he has been supporting himself completely on his own.

“I do think the benefits of a private institution outweigh the costs,” he said. “A private school education, especially at PLNU, is worth it. You’ll alway hear about smaller class sizes and having relationships with professors and a closer on-campus community. I believe these things really do positively impact students.”

As Park looks to his future as a nurse and mentor for youth, he is grateful. Though he has been through hard times, he has also been blessed.

“You couldn’t have scripted this with the people God has put in my life and going to PLNU without having any debt,” he said. “I just give so much glory to God, and I continuously thank him.”

Want to learn more about supporting or receiving scholarships and financial aid?

We know how important it is to be able to afford your college education — it’s an investment unlike any other. Find out more about financial aid at PLNU or help make college possible for students by making a gift!