Home Topics STEM & Health My Journey Through the History of Mathematics 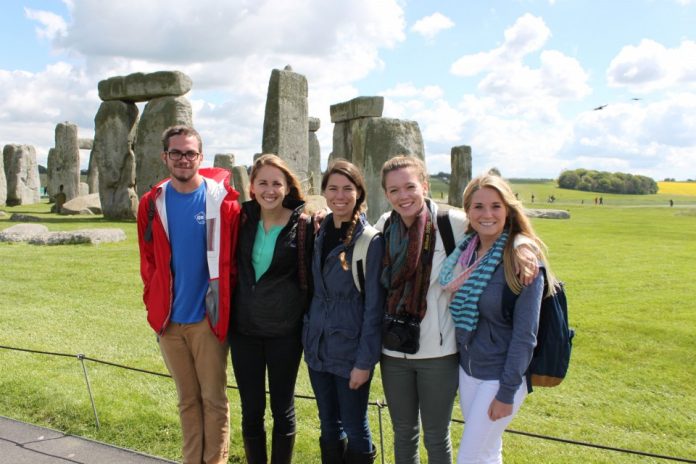 The day after graduation, Dr. Maria Zack, chair of the Department of Mathematical, Information & Computer Sciences, led me, along with four other students, on a two-week study abroad trip to England for a course on the history of mathematics entitled “Time, Space and Place: The History of Mathematics and Science in England from 1500-1800.”

Everybody on the trip was pretty different, which made for a good experience and an interesting group dynamic. Before we left, we read books on the lives and works of Isaac Newton, Christopher Wren, and the history of the longitude problem. We wrote short papers on these books and their relevance to the history of mathematics and our trip. In addition to reading these works, we also each chose a topic to research independently. Like the books, our topics had historical, mathematical, and cultural significance. We each presented on our topic in an appropriate setting. Since I researched Wren’s involvement with dome building techniques, it was only appropriate that I present underneath his magnum opus and one of the most recognizable domes in the world, St. Paul’s Cathedral.

This was one of the most unique presentations I’ve ever given. For one, I was presenting to Dr. Zack, who not only knows the topic very well, but also has written about the very same subject. It is very difficult to wing anything under these conditions. The presentation was also unique in that I had never given one where the subject had such a tangible presence.

I could easily make connections for the class based on our collective experience. Rather than point to a photograph of the cathedral and hope my ideas got across, I could just say, “Do you remember that time we were upstairs?”

We visited some of the classic English tourist spots. We stopped by Stonehenge, the Tower of London, Bath, and Oxford, and watched the changing of the guard — all the good stuff. We received a special behind-the-scenes look at the British Museum, which has special papyrus storage for the items too fragile for public viewing. This storage section includes the ancient Egyptian Book of the Dead and the Rhind Mathematical Papyrus. The latter gives great insight into Egyptian mathematics; it shows how far they had come as a society and the types of problems they were dealing with. It was pretty nerve-wracking being around these priceless artifacts. I couldn’t help but think of the horror stories of people tripping and tearing documents and paintings. As glad as I was to see the papyri in person, it was also a relief when we got out of there.

Seeing artifacts up close really put into perspective how tangible history is in a place as old and well-preserved as London. It seemed like everything was significant. Most city blocks featured some event that I had read about, and others contained the childhood homes of historically significant individuals.

We spent the last few days of the trip in Oxford, where we visited the town’s renowned university. Established before the Incan Empire, the University of Oxford is the second oldest university in the world and has been offering classes since around 1096. This is another place as impressive for its history as it is for the architecture and list of alumni.

One of my favorite spots was Bletchley Park, the secret home of British code breaking during the Second World War — an important historical location for its involvement in the completion of the war, the advancement of computers, and the advancement of women in the workplace. Many of the code-breakers at Bletchley Park were members of the Wrens (the Women’s Royal Naval Service). In the same way the Americans and British learned to get along by working together for a common goal during WWII, at Bletchley Park, men and women got used to working together, breaking code for the good of the cause.

Every moment of the trip was full of information. The class was shockingly fascinating. I know more now about the development of longitude measuring techniques than I thought I would ever know or need to know. Because of that, I see travel in a new light. Stories of sailors from a time without chronometers have become more interesting, as a surprising amount of their success came down to a matter of solid guesswork. A good wristwatch has new meaning to me. There is a history behind its existence tied so tightly to nautical history that I’ll have trouble thinking of one without the other.

Sometimes it was difficult to take it all in. I spent most of the trip exhausted. Between jet lag, touring around most of the day, exploring the city with classmates at night, getting assignments done, and tallying the differences between British and American Netflix, I didn’t sleep a ton. On more than one occasion, I got frustrated with myself for not fully appreciating some of the things I was seeing. This was especially true when I was choosing between seeing a painting I’d always wanted to see and sitting down. Ultimately, I chose to walk to the next room and look at the painting. This was the right choice, as it was every time I had to make a similar decision. The trip was solid; I ate my share of meat-filled pastries, got to travel around with a fun group of classmates, learned to appreciate free soda refills in America, and saw things I never thought I would or could see.