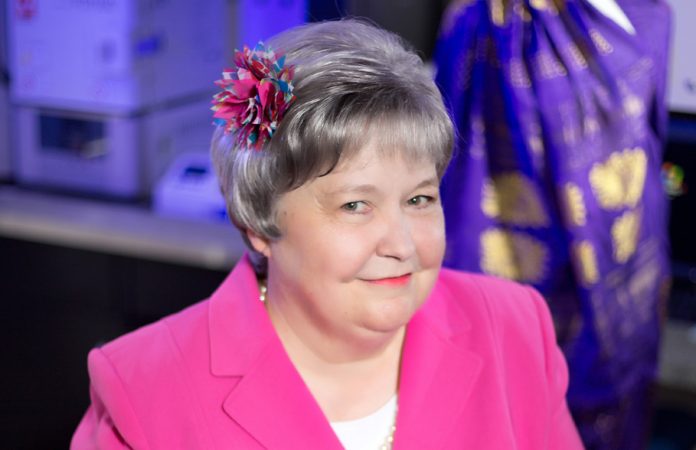 In junior high school, Dr. Nancy K. Murray, professor of fashion and interior design, took her first sewing class. She made a basic skirt and was one of two students to receive an A. For her 16th birthday, she received her first quality sewing machine, with which she made a dress and jacket for her grandmother’s 50th anniversary party. She was captivated.

Her first job in fashion was as a sales associate for Horne’s Department Store in Pittsburgh, where she later took a internship “on the lowest rung in the buying office.” But she jumped right in, sifting through stacks of industrial magazines like Women’s Wear Daily and then writing reports on trends. After weeks of coming home with newsprint on her hands, the research became her job.

It was a valuable hole to fill. The idea of prophetic style (a term she now teaches in her fashion classes) means being able to recognize emerging trends in fashion before they happen, and it leaves little time for last minute decision-making. Providing meaningful research at the front end of the sales cycle is invaluable.

Murray went on to earn her master’s degree in textiles, merchandising and design and her Ph.D. in human ecology (which would later become family and consumer sciences) from the University of Tennessee, Knoxville (UT). What drew her to UT was her love of weaving.

“I was fascinated by the technology of the loom,” said Murray, who showed her work at juried shows and completed commissions from interior designers for their clients after diving into the related art program at UT.

After graduating, while she was teaching at the University of Nevada, Reno, she was given a rare opportunity when she earned a Fulbright Scholarship, along with a dozen art and design teachers, to travel and study textiles in India.

The group visited 14 of India’s 17 states over the course of seven weeks, focusing on the country’s handcrafted arts. They focused their visits on government-sponsored design centers that were charged with the task of promoting the handcrafts of their state to encourage employment, especially for the poor and for women.

“Close to half of everything we saw was textile related … At the time, I was heavily focused on hand-dyeing processes like batik and especially a technique called ikat, which involves tie-dyeing the warp yarns before they are put on the loom for weaving,” said Murray.

Going on a trip to the second-most populated country in the world, where she was able to meet the prime minister, Indira Gandhi, along with numerous workers who mixed toxic chemicals every day with their bare hands, was life changing for Murray.

“The smells, the poverty, the dirt, and the density of the population were all shocking to me, but it was the dramatic contrast that was the most eye opening,” said Murray. “I would meet laborers in the morning and be entertained by millionaires wearing more gold jewelry than I had ever seen outside a jewelry store six hours later.”

At PLNU, Murray has been able to teach a wide variety of courses in the fashion and interiors program with her vast expertise. Altogether, she teaches 11 classes that range from the history of costume to textile science. Meanwhile, the connection between fashion and a wider awareness of fashion’s role in the world economy came full circle. The connection is best embodied in what she loves most about PLNU—her students.

“I’d never taught anywhere where students take it on themselves to give back,” she said. “It’s changed the way I teach because the attitude here is that it’s almost a mandate to give back. There’s a rub-off on the students who don’t initially think that way.”

She gives the example of one of her classes’ response to a shift in fashion that occurred in 2008. Because of the recession, frugality became popular.

“The result was that people looked at fashion differently,” said Murray. “It raised the consciousness of my students. They were more concerned about the less fortunate having clothes—new clothes.”

Her apparel construction students embraced making dresses for Little Dresses for Africa, a nonprofit that provides relief to African children by sending simply sewn dresses made out of pillowcases to 43 countries in Africa, as well as to several countries in South America and regions in the Appalachian Mountains.

Of course not all fashion careers are philanthropic or even design related. On a whole, Murray says “the fashion merchandising program [at PLNU] focuses most on the business of fashion rather than the designing of apparel. U.S. retailers of fashion are more important to the U.S. economy today than the textile and apparel manufacturing industries because of the dominance of imports.”

But whether her students aspire to thrive in the for-profit or nonprofit world or in the business or design part of fashion and interiors, Murray admires how they have continued to grow in boldness and creativity, saying, “Every year my students seem to me to be more fearless than the last group.”

She connects with her students in this way. Her vast expertise and genuine heart speak truth and crisp insight into an often-stereotyped industry.

“There are many ways to serve Christ in the fashion world,” said Murray. “Profit is not a dirty word; greed is, but profit provides jobs and feeds families. Running a business with ethical principles is an important element of Christ-like work.”