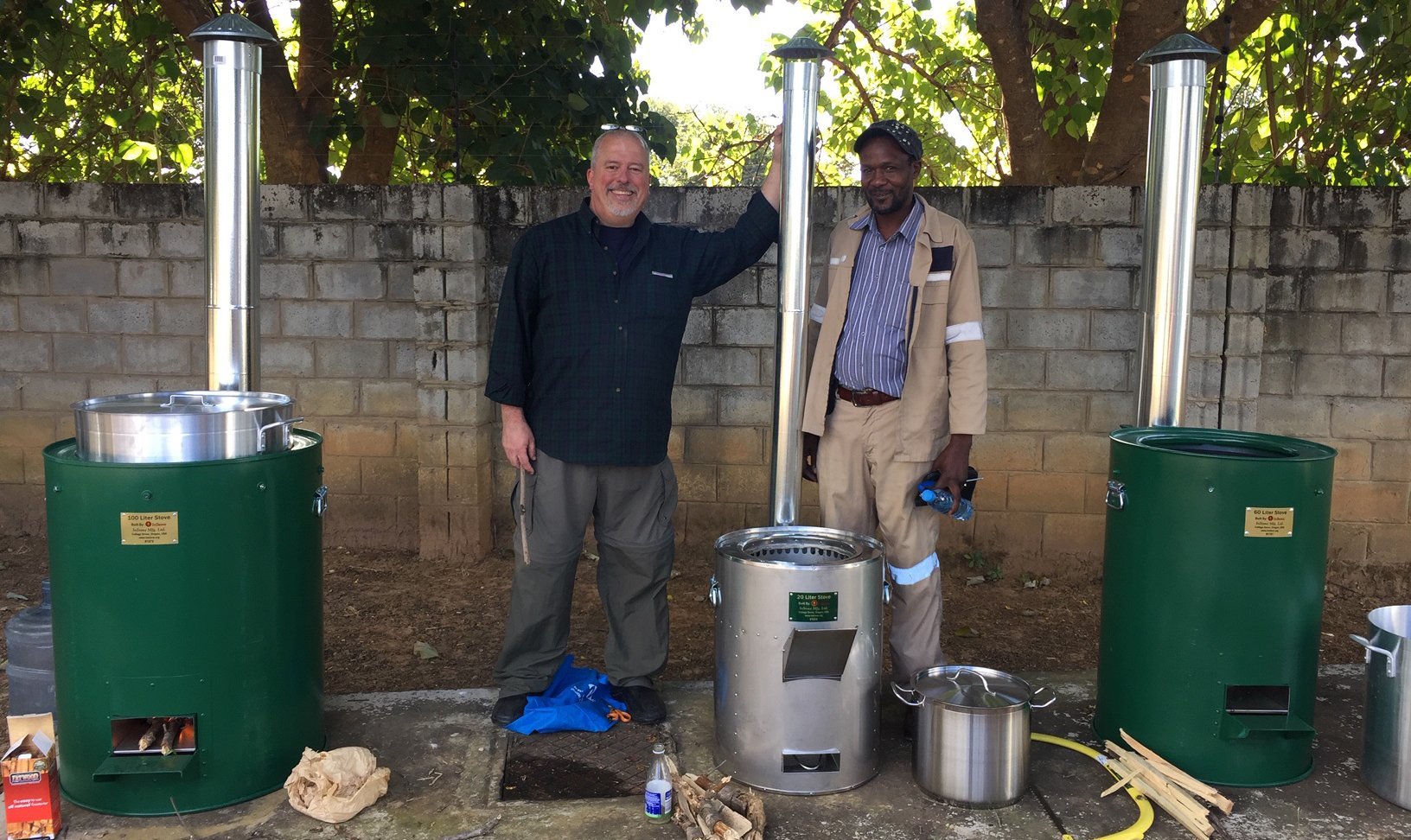 Two years ago, PLNU alum Nathan Kemalyan (83) retired after many years of serving as a full-time surgeon in Portland, Oregon. Though no longer a full-time surgeon and educator at the Oregon Burn Center, he began pouring himself into a series of part-time work opportunities and side projects, including operating a small practice treating burn scars, serving as part owner and medical director in two healthcare service organizations, and overseeing a surgical tool design studio. And he also began devoting more time to his mission of bringing safe and efficient wood-fired institutional cookstoves to hospitals and the wider public in Zambia.

Kemalyan’s involvement in this mission began in 2009. He was recruited through the American Burn Association by a colleague and friend, Dr. Barbara Letenser, to journey to Zambia in order to provide training related to modern burn care at St. Francis hospital in Katete. What he experienced there changed everything.

“It just transformed my view of my career and my place in the world as a burn surgeon,” Kemalyan said. “I came home with a great deal of questions and motivation and energy to try and make an impact on burn injuries in places other than Portland, Oregon.”

While on the trip, Kemalyan learned that most men are injured in similar ways to men all over the world: by doing ill-advised things with volatile liquids around open flames (often under the influence of alcohol). Women and children, however, are injured almost exclusively from cooking. This is because they rely on cooking in pots over three-stone open fires, which is a highly risky cooking environment.

“When I got back to Oregon, I was thinking about the massive amounts of healthcare resources demanded to treat every injured individual. And in countries like Zambia, they can spend only $200 or less per capita per year on all health care and so they just can’t afford to provide modern burn care,” Kemalyan said. “There was a conflict between the task for which I was sent and the reality of that environment. I saw a great opportunity to do something around burn prevention.”

Kemalyan realized that one best way to treat burn care victims in Zambia was to prevent them in the first place, and a major way of doing this was to address the way they cooked their food over open fires.

In other words, Kemalyan realized that one best way to treat burn care victims in Zambia was to prevent them in the first place, and a major way of doing this was to address the way they cooked their food over open fires. His involvement in this area of international medical relief led to him becoming Chairman of the American Burn Association International Outreach Committee. In this role he traveled to several health centers in Zambia, meeting with many individuals to discuss ways of improving burn care in the country. He was becoming more and more immersed in the mission of addressing this critical medical problem.

Back home in Portland, he began looking for organizations that could design more efficient and safer cookstoves.

“A short 100 miles from Portland were some nonprofits in the clean cookstove movement that started back in the 1980s, and one of them was Aprovecho Research Center. It was part of an alternative living commune in the woods outside of Eugene. Amongst other things, they worked on designing better wood-fired cookstoves. A guy named Fred Colgan and another engineer named Damon Ogle got involved to leverage what Aprovecho was doing to build institutional sized ‘rocket stoves’ to cook for large groups of people, which eventually resulted in another nonprofit called Institutional Stove Solutions,” Kemalyan said.

“When I finally met with them, it was like falling down the rabbit hole into a different world with these old hippies trying to change the world by designing improved cookstoves,” Kemalyan said. “I was totally taken by the romance of that effort and I became the first healthcare board member of Institutional Stove Solutions.”

While these rocket stoves were a step in the right direction, Kemalyan realized they didn’t have the ability to bake, something that was incredibly important to people living in Zambia. So he teamed up with the engineering program at George Fox University and collaborated with the dean and a handful of engineering students to develop an insert for these cookstoves that enabled baking.

Kemalyan then connected with the Churches Health Association of Zambia, the mission hospital association that is responsible for delivering 40 to 45 percent of all healthcare in Zambia. Through this relationship, he was able to share his work on cookstoves. The organization became very interested in this cookstove technology because, not only did this technology allow for safer and more energy-efficient cooking and baking, but it can be paired with a simple autoclave to sterilize surgical and obstetrical equipment. This technology can result in massive resource savings since hospitals wouldn’t need to power electric autoclaves to sterilize equipment, which requires running generators that use precious and expensive diesel fuel.

“I started cold-calling mission hospitals on the internet and one of them responded and by the grace of God the director of that hospital agreed to accept four of our cookstoves and two autoclaves (sterilizers),” Kemalyan said. “We eventually got word back that the stoves had transformed the way they cook and sterilize in their hospital. And so I made a commitment to donate $10,000 worth of cookstoves and autoclaves, which was matched by other donors, and we sent a container of 30 crates of cookstoves and autoclaves to 15 more hospitals. And then we did it again in 2018.”

Smoke-related illnesses are the second leading cause of early death and disability in African women, after malaria. Cooking like this is environmentally problematic and is a public health disaster.

While early success has given Kemalyan reason to hope, there is still much work to be done. Not only is he working to get this cookstove technology into more and more hospitals to reduce massive energy costs for Zambia’s healthcare providers, but he hopes that it will lead to a wider adoption of this cooking technology with the objective of preventing burn injuries and other illnesses resulting from chronic exposure to wood smoke.

“Cooking on an open fire has incredibly negative impacts on cooks. They might as well be smoking three packs of cigarettes a day,” Kemalyan explained. “You don’t have to smoke tobacco to get cancer or heart disease. Smoke-related illnesses are the second leading cause of early death and disability in African women, after malaria. Cooking like this is environmentally problematic and is a public health disaster.”

Kemalyan hopes that as more hospitals adopt this cookstove technology that the public will begin adopting it as well.

“My hope is that once we penetrate the mission health sector with these cookstoves then I can convince the Churches Health Association to become champions for personal and family cookstoves in the communities they serve,” Kemalyan said. “That is my secret burn prevention weapon because if they adopt these cookstoves the incidence of burn injury will plummet and there will be less injuries to treat.”

While Kemalyan has given much personal effort and time to this mission, he is quick to mention the many others who are working hard to help make this dream a reality. People like Sandie Simwinga, a CHAZ nurse practitioner who travels all over Zambia to collect and repair medical equipment and is a huge enthusiast for the mission. And Kemalyan is also quick to point to the primary author of this dream for better health in Zambia.

“This is God’s story and it is my privilege to be along for the ride,” Kemalyan shared. “This door swung wide open and it wasn’t through any brilliance of my own. I know it was God’s leading.”

Related Article: How a hike up Mt. Kilimanjaro paved the way for Cindy Outlaw’s work in East Africa.