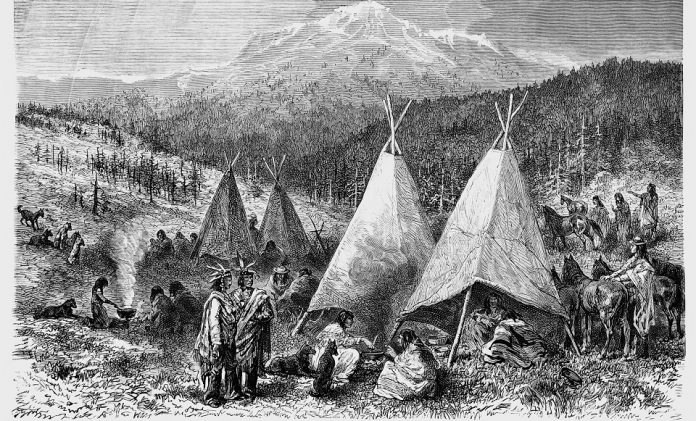 The stories told and passed down through generations are what we use to form ideas about who we are as a people, country, tribe. These stories of family and culture, land and origin, if remembered, give value to our experiences and inform our identities, our relationships with each other, and our purpose and meaning.

The story of America’s origin told for centuries centered on Christopher Columbus, a European explorer, who was commissioned by the Catholic monarchs of Spain to discover and claim new land. Here, he found “the New World,” and with it, Native peoples, then assumed to be illiterate “savages.” In this narrative, the cultural and aesthetic production of Native cultures in North America, the stories of the Native communities, were not legitimized. These communities endured centuries of dispossession and marginalization instead.

Now, American Indian literature is experiencing what some might call a cultural renaissance.

Lydia Heberling (06) is part of a community of scholars who have begun to bring these important stories back to the center through the study of American Indian narratives in the literary field.

To do this, her work takes a look at key aspects of the narratives of Native cultures—the songs, the ceremonies, the stories passed orally from generation to generation, the wampum belts, and the birchbark scrolls—which have been in danger of being lost or forgotten entirely.

The study of American Indian texts is still relatively new within the broader field of literary studies, and according to Heberling, “it sits at the edges of our understanding of what ‘literature’ is and who can produce it.”

Heberling’s research focuses specifically on the literary and cultural production of Native communities in and around the Pacific Rim. And in large part, her approach is ecocritical, which allows her to explore “the way that place shapes and defines the kinds of stories we tell.”

“The relationship between indigenous cultures and land is a vital one,” Heberling explained. “Oftentimes, the continuity of cultural identity hinges on a community’s ability to either access or remember that land.”

Heberling is passionate about focusing on the ways Native literary and cultural expressions can change existing representations of Native communities. She is keenly interested in analyzing indigenous literatures set against American literatures to illuminate how key moments in U.S. literary history defined the tension between Pacific indigenous communities and the imperialist perspective of American expansionism. For example, comparing Herman Melville’s Moby Dick with Linda Hogan’s People of the Whale, a 2008 novel written by a Native American from the Chickasaw tribe, could allow her to think through the impact of colonial power on both the welfare of Native peoples and communities and ecological balance in the Pacific, within the context of American literature.

By recognizing that Native cultures are “contemporary, vital and dynamic,” Heberling is part of a movement that is expanding the study of them from anthropology and ethnography to the field of literature, “exploring and understanding the narrative threads that connect contemporary Native communities back to their cultural origins,” she said.

And in this movement, the injustices done to these communities are hard to ignore. Studying these works of literature, Heberling is very aware of the settler history that was told over and above the stories of Native communities.

Her challenge is being able to converse about these issues without continuing the problem of “speaking for” indigenous writers.

“Because Western institutions have a historical tendency to ‘speak for’ native peoples, I have been cautious to work with this framework in a way that keeps the native community at the center and does not accidentally silence a native author or text,” Heberling explained.

“Indigenous communities are only recently beginning to take control of the narratives that are historically about them and re-narrate history to tell a more accurate story,” she continued. “And they’re doing it in fun and generative ways. This feels like important work and I don’t want to get in the way. I am interested in giving space to stories that will help us as readers of ‘American’ literature rethink and expand our understanding of history, power and place.”

For Heberling, deepening any understanding we have has to first start with questioning. She wonders how we can cultivate an openness to the unknown and unfamiliar around us, and what insights we might gain when we do this.

“We discover a richer, more vibrant, and beautifully textured truth about who we are and who God is when we give ourselves permission to engage with a broader range of stories,” she said. “Not just stories that affirm or reify what we already think to be true, but stories that challenge, complicate, re-frame and extend our truths.”

The Restorative Power of Street Art

Setting out Into the Deep