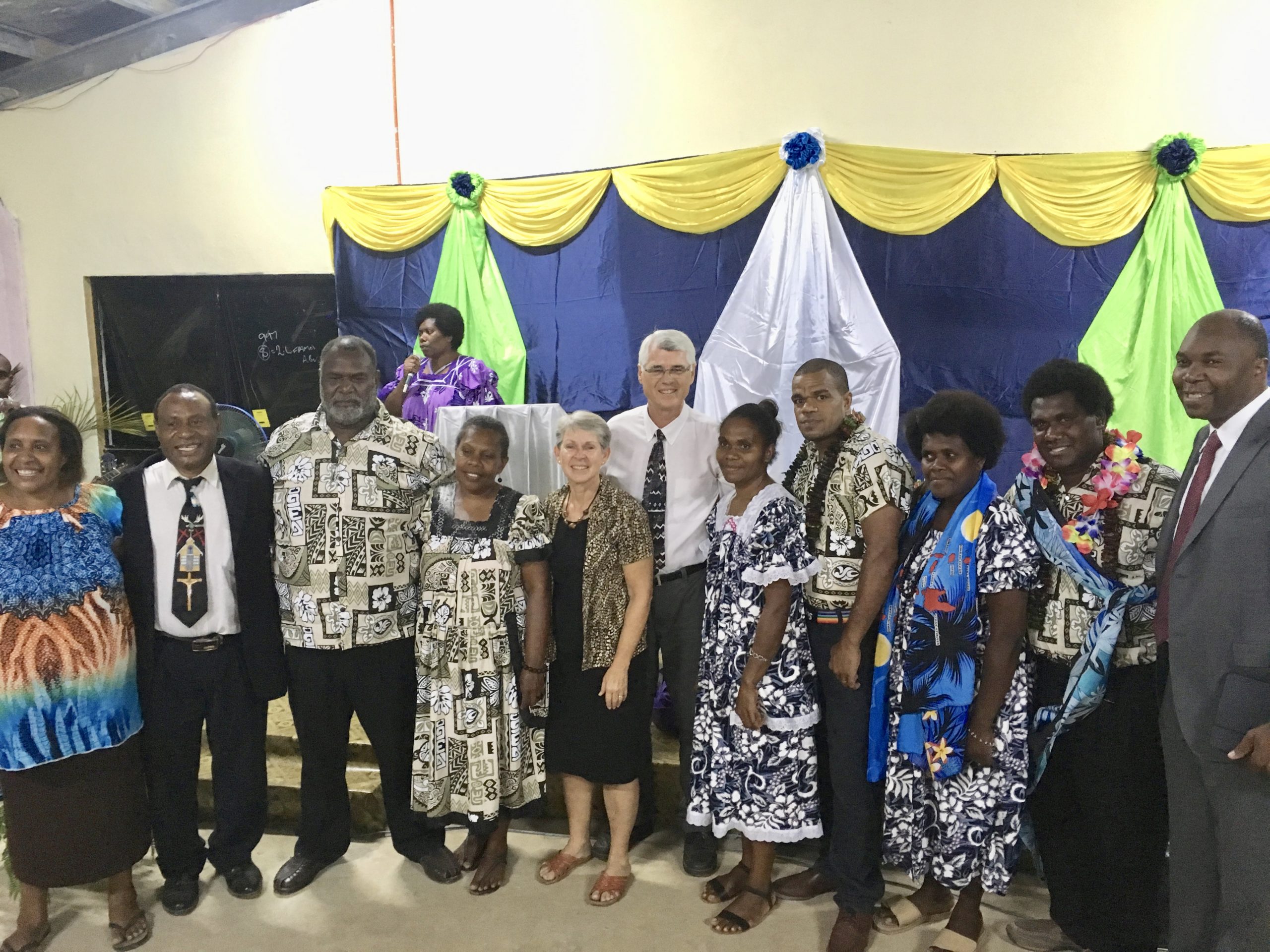 Sylvia Potter is an expert at change. Moving to San Diego from Bethany, Oklahoma, for college was only her first taste. Her life changed again when she and her husband, David, moved across the world to Papua New Guinea to be missionaries. Now, she is facing another transition as they are preparing to leave their world in Vanuatu and retire in the United States.

Vanuatu is a small collection of islands in the South Pacific, and the Potters have lived there for 18 years. It has been a long time since they attended Point Loma. Sylvia was a nursing major and recalled being very shy when she first arrived at PLNU. “It was a great experience. I look back with fondness at what I got to experience there, classes and professors. I made lifelong friends there,” she said. “I felt like my walk with the Lord was strengthened there. I grew as a person, became much more confident. That was part of God’s development in me, I think.”

Her time at Lomaland Drive was not solely focused on nursing classes; she also met her future husband.

“David let me know right away when we started dating at Point Loma, he said, ‘God’s called me to be a missionary; I’ve known since I was five.’” She did not share this strong calling, but the warnings of others came to mind: “If you’re called to be a missionary, make sure God’s called you, or you’re not going to make it.” This would make anyone open their eyes to any sort of signs, and that’s exactly what Potter told God — if He wanted this for her, He was going to have to make it clear.

That’s exactly what He did. David and Sylvia went and visited with the Nazarene Global Mission assistant director, John Smee. She said, “While we were sitting there, the Lord just said, ‘Sylvia, whether I want you to be a mother and a wife or to be a nurse or whatever, I still want you on the mission field.’ God wanted me there.” And so she went.

It’s been decades since then, and her days are now filled with Bible studies, preaching, and discipling those around her. “It’s tropical and beautiful, and it’s a joy to live here,” she said of Vanuatu. “A majority of the people have a garden, they grow things, and they eat that and what extra they have, they sell and that gets them a little money. They appear poor, but they’re very generous people and they take care of each other.” Every day looks different and while her calendar is full of different events, there is still time for mundane tasks like doing the laundry.

Even when they move to the United States in the fall, the Potters’ days will look like this for a while as they travel to different speaking engagements. “I think America’s going to feel kind of boring at some point,” she added. With one son in Alaska and two in Michigan, she is looking forward to the family time they’ve been missing for years. “I never thought that it was a sacrifice, except for being apart from my family, being apart from my children, especially. That has felt even stronger lately as I’ve thought about the influence I want to have on my grandchildren’s lives. It’s never felt like a sacrifice. It’s felt like a real adventure, but we weren’t in it for the adventure.”

The transition from working to retirement is already an overwhelming one, but to move across the world at the same time? It is difficult enough without thinking about how to transition “well.” The Potters have one idea, though, that they borrowed from a young family in Texas preparing to move to Poland — a list of lasts. It’s a list of all the things they want to do or see or say goodbye to before they move away.

“I’ve thought about the influence I want to have on my grandchildren’s lives. It’s never felt like a sacrifice. It’s felt like a real adventure, but we weren’t in it for the adventure.”

On the Potter’s list was getting their last immigration permit and registering their truck — both things that are tedious and yet it will surely feel strange to not have to do them every year. Many of the things on the list will be more emotional.

“There’re lots of people that are on the list of lasts. I’m not focused on that very much yet, because it would tear me up if I was too cognizant of the lasts,” Sylvia said. The list is meant to help with this transition, not to keep them wallowing in their sadness, but saying goodbye is sad nonetheless. Life in Vanuatu requires that the goodbyes start early, “We’ve got a pastor who went to a separate island, and we’ve been discipling him and his wife for many years. He says, ‘Well, I don’t know if I’ll see you before you leave.’” One hard goodbye is crossed off the list, but Sylvia chooses to focus on the positive.

“The goodbyes are not as harsh as they used to be. There’s so much social media … Even the last isn’t going to be the last,” Sylvia adds optimistically. Soon they’ll start going through their belongings and saying goodbye to the house they’ve been living in for years.

“At some point, we’ll really realize what it’s like to live in the United States just as normal people,” Sylvia said, though it is hard to imagine what “normal” looks like for them.

There is always more to be learned about the process of change; luckily, Sylvia is a lifelong learner. This next transition from full-time missionary to retirement will be unlike any of the rest, but David and her faith remain constant.